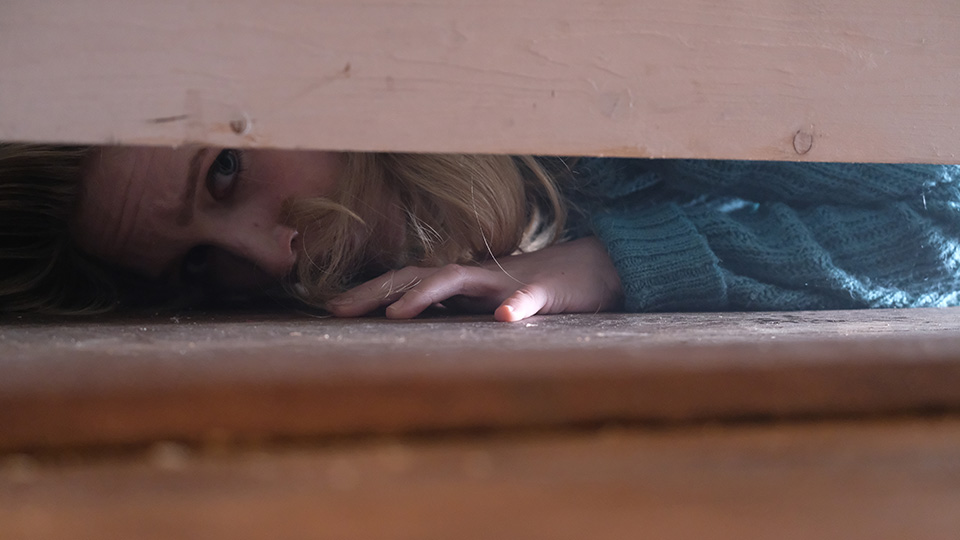 Pregnant young woman Mary (Sabrina Kern) seeks refuge at a convent in small-town Georgia to escape her abusive father (Jayson Warner Smith) following the death of her younger brother. Leaving behind her boyfriend Jimmy (Justin Miles), Mary thinks she’s found the perfect place to give birth to her child but she soon discovers there’s much more to the convent than meets the eye. Run by Mother Superior (Carolyn Hennesy), the convent hides plenty of secrets and Mary realises that leaving once her baby is born is going to be a lot harder than she thought.

St. Agatha is directed by Darren Lynn Bousman (Saw II – IV) and it more than delivers on the promise of its premise. The story, set in the late 1950s, is told with a split narrative and opens with Mary trapped in a coffin, calling for help. As the story unfolds the audience sees Mary uncovering the secrets of the convent and we learn the story of how she came to arrive at the convent in the first place. That technique helps draw out the tension and the suspense, something that Bousman is very good at doing with his films.

Mary attempts to befriend the other young women that live at the convent but all of them are too terrified of the nuns to reveal what really goes on there. Sarah (Hannah Fierman) experienced tragedy when her baby died after birth while Doris (Lindsay Seim) and Catherine (Courtney Halverson) are patiently waiting to give birth. It doesn’t take too long before Mary starts to become suspicious of the intentions of the Mother Superior and her fellow nuns.

With Bousman at the helm you may be expecting a splatter-fest but that’s not really what you get with St. Agatha. Sure there are some pretty horrific scenes (I still shudder at the thought of scissors) but the film is well-balanced with its dramatic side. This isn’t a film that is out to shock you, it’s one that draws you in and takes you on a journey with characters you’ll start to deeply care for.

Sabrina Kern leaves a lasting impression in her feature film debut. Her character Mary is really put through the wringer over the course of the film and Kern rises to every occasion. She’s strong and determined, at times fearless and most importantly a compelling lead that gets the audience on side with ease. You feel protective over her as Mary tries to protect her child and indeed her own life. Carolyn Hennesy (True Blood, Cougar Town) is a force of nature as the wicked Mother Superior. She’s a master at switching from pleasant to wretched, and I was actually a bit terrified of her. Hennesy relishes playing the villain and she does it with such conviction, you can’t help but be impressed.

St. Agatha is an utter thrill-ride of a film. It has everything you want from a horror film – tension, scares, blood, twists, sadistic villains – and it delivers a star in Sabrina Kern. I wish I knew why nuns were so creepy and effective in horror films and after watching St. Agatha I’m even more terrified of them! With 70 films showing at Arrow Video FrightFest 2018, it can be easy for some films to fall by the way side but I’m confident by the end of the weekend, St. Agatha will be one of the standouts of the festival.

St. Agatha will be receiving a home entertainment release in January 2019, courtesy of Signature Entertainment.