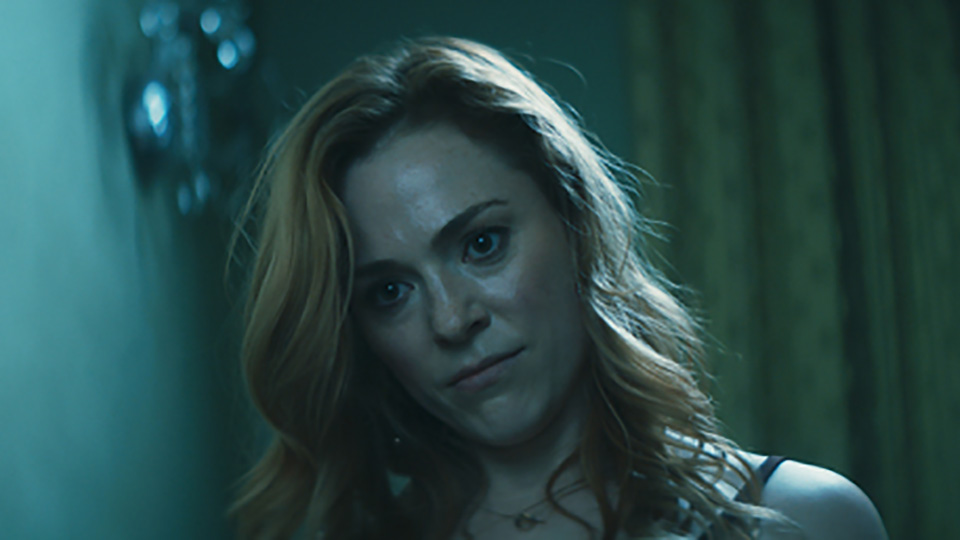 During a night out at a bar Sarah (Ella Scott Lynch) meets the charming and handsome Lewis (Benedict Samuel). After striking up conversation, the two hit it off and they feel an immediate spark. Sarah agrees to go back to Lewis’ house where their connection turns sexual but things soon take a sinister turn. Lewis isn’t the nice guy he appears to be and when his flatmate Kenneth (Robin Goldsworthy) gets involved, Sarah is forced into fight or flight. What the two men don’t know though is that Sarah is hiding her own dark secret.

Pimped is the feature film directorial debut of writer/director David Barker and it’s actually quite a difficult one to talk about without giving too much away. Aside from the basic premise, it would be a huge spoiler if I were to reveal the event that transforms the film into a sexy thriller into a full-on shock fest. Suffice to say that Lewis and Kenneth get a lot more than they bargained for when Lewis brings Sarah into their lives, and it’s very quickly established that she’s anything but the meek and mild woman she’s presented to be initially.

You’ll think within the first half an hour that you’ve got a handle on Pimped but you’ll probably be proven wrong. The film seems like it’s going to be one thing but then does a bit of a rug pull and takes a slightly different, and unexpected, direction. I have to admit that I ambled through the film to begin with but once it showed its hand, it convinced me to jump on board. In large part that’s to do with the wonderful performance (or should I say performances?) of Ella Scott Lynch. She gives a truly magnificent turn, which helps elevate the material above average. I found her quite captivating on screen and she’ s a strong heroine you can root for, in spite of what the film reveals about her.

Benedict Samuel, best-known for his recurring role of US hit series Gotham, doesn’t have the range of Scott Lynch but he delivers an adequate turn. Looking reminiscent of Skeet Ulrich, he is convincing as unhinged but there weren’t really any layers to his performance. There’s also nothing in the way of explanation for his character’s behaviour.

The final act is quite intense, even though I guessed where it was heading, and there was plenty to engage with. I found the ending of the film a little unnecessary and confusing though. It should have stopped 5 minutes before it does and it didn’t need what was essentially an epilogue. I felt it added nothing to what had come before.

In all honesty Pimped was a better film than I was expecting it to be. It didn’t really go in the direction I expected, for the most part, and I thought Scott Lynch was excellent. I’m usually one to complain that there was too much exposition and scene-setting in a film but with Pimped I felt it could have shared a little more with the audience. It’s an entertaining film nonetheless and bit of frivolous fun.

PIMPED from FrightFest on Vimeo.

Pimped will receive a home entertainment release in early 2019, courtesy of FrightFest Presents.