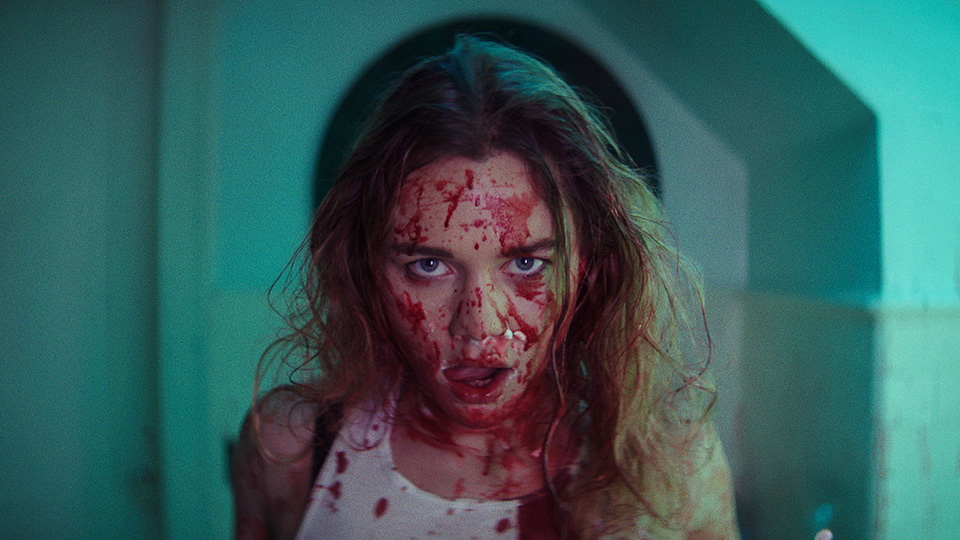 Friends on the run Petula (Imogen Waterhouse) and Tilda (Sarah Hay) decide to visit childhood friend Daphne (Madeline Brewer) with a plan to rob her. Upon arriving at Daphne’s grand but rotting mansion, the women decide to play along with their estranged friend’s twisted game, governed by three rules. As Petula and Tilda try their best to play along, and not upset Daphne in the process, they soon realise that they’ve let themselves in for much more than they bargained for.

Braid is a new film from writer/director Mitzi Pierone and it’s a bit of a mind-bender. Petula and Tilda pass their days selling drugs, as well as being reality TV stars, and the two women have a twisted bond that will see them stop at nothing to get what they want. A scene early on in the film shows the exact state of mind of both women as they indulge in drugs and go on a psychedelic trip. The camera spins around and you feel like you’re taking part with them.

The game they are instructed to play requires Tilda to pretend to be Daphne’s daughter while Petula takes on the role of a doctor. As the rules state everyone must play along and it’s not long until one of the women breaks them and suffers the consequences. It took a little while to really understand what was unfolding on screen and I have to admit I was scratching my head on a few occasions. All does eventually become clear and it’s rooted back to when the three friends were young.

Despite being intriguing, the film does start to unravel in the final 30 minutes. I really felt this didn’t live up to the build-up I’d been expecting and the film, for me, ended with more of a whimper than a bang. I thought it almost rendered everything that had come before pretty much pointless, which is a shame as Peirone directs with such an impressive flair that even when the storyline didn’t grab me, the visuals did.

The three lead actresses can’t be faulted. Madeline Brewer is deliciously unhinged as Daphne while Imogen Waterhouse is believable as a young woman who uses her charm and sexuality to get what she wants. Sarah Hay proves to be the film’s secret weapon and her character Tilda undergoes quite the transformation by the end.

Braid has a lot going for it but I really do feel that a stronger ending would have made it a better film. It takes an already bizarre concept and pushes it a little too far, which is ultimately its downfall. Visually the film is stunning to look at and there are plenty of ideas here, but it’s a little over-crowded. Stellar performances will keep you hooked along with Peirone’s strong direction but the storyline may leave you a little disappointed.