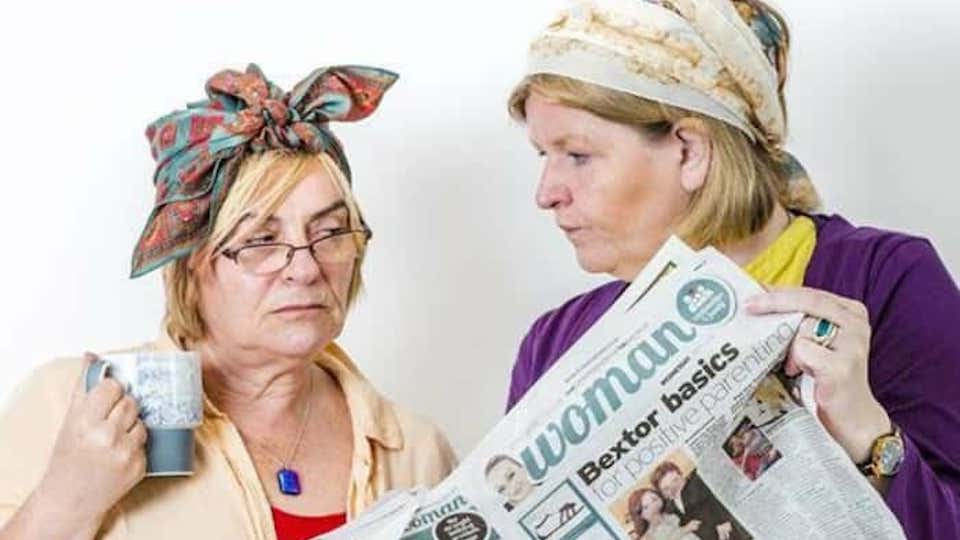 Scottish comedians (and self-professed pair of fannies) Jojo Sutherland and Susan Morrison make an hilarious stream-of-consciousness double act. At 5pm daily, every fanny in Edinburgh is welcome (be warned, a 14+ minimum age is advised) to join Fanny’s.

I’ve seen dozens of Fringe shows over the years and rarely do you feel energy literally burst into a room like this. The duo’s jovial chemistry is infectious as, talking hurriedly, they arrive as if they’ve moments to spare, faces shining with perspiration. In their broad, warm Scottish accents they instantly encourage us to pass two tubs of M&S chocolate brownies around. Did you ever arrive at your gran’s, or friend of your mum’s, and not instantly get offered something to eat? It’s a subtle touch that creates a relaxed feeling and, crucially, as if you’re among friends. Our two new pals will get to know us just as much as we’ll learn about them for this isn’t a one-way conversation. Throughout the hour they question pretty much everyone in the room; don’t think you can hide at the back! Their confidence and never-miss-a-trick flair for crowd work is truly something to behold. The embarrassment factor’s lighthearted, though, and no-one is made to feel small.

Sharing a conversational delivery style that seems effortless, JoJo and Susan are endlessly entertaining to watch. Speaking in a lyrical Scots dialect, it can take an untrained ear a little while to catch up but it’s all part of their charm and honesty. Scottish audience members were extremely responsive as the ladies took the mickey and indulged in local banter without alienating the tourists. As the fannies tackle topics such as the menopause and childbirth, traumatising a 14 year-old-girl on the front row in the process, their brand of riotous material is a real hoot. JoJo and Susan are older, if not all that wiser, but their wit matches the shared knowledge of their years. However, don’t be fooled, this is not just mindless chatter. There’s quick fire gags that you’d blink and miss. The pair don’t miss a beat as they share outrageous truths about each other’s lives, they bounce off one another in playful one-upmanship. Without actually bringing the other down, though, there’s a fine balance as they egg each other on and roll their eyes at each other’s idiocy in equal measure. A particular highlight came in Susan rattling off impressive, obscure facts about The Titanic while JoJo jeers at her. Put it this way, what Susan doesn’t know about that sunken ship is not worth knowing!

While some Edinburgh shows are well-crafted, this is somewhat chaotic. It’s very much an off the cuff show. (Or ‘off the muff’ show, the fannies may prefer to say!) It’s an anything-can-happen hour of bawdy amusement which may not be to everyone’s tastes. It’s a truthful, engaging hour of comedy and, just as the pair are about to leave the stage, we’re knocked for six when cancer is casually dropped into conversation. In as carefree a way as moments earlier they’d discussed your first alcoholic drink. There’s no time to dwell, and it’s plain to see that they’re keen to crack on with being funny. (But we sincerely wish Susan a full and speedy recovery.) Then, just as audience admiration levels are through the roof, suddenly, our hour’s up and we’re left wanting more. Isn’t that the way with many a fanny!