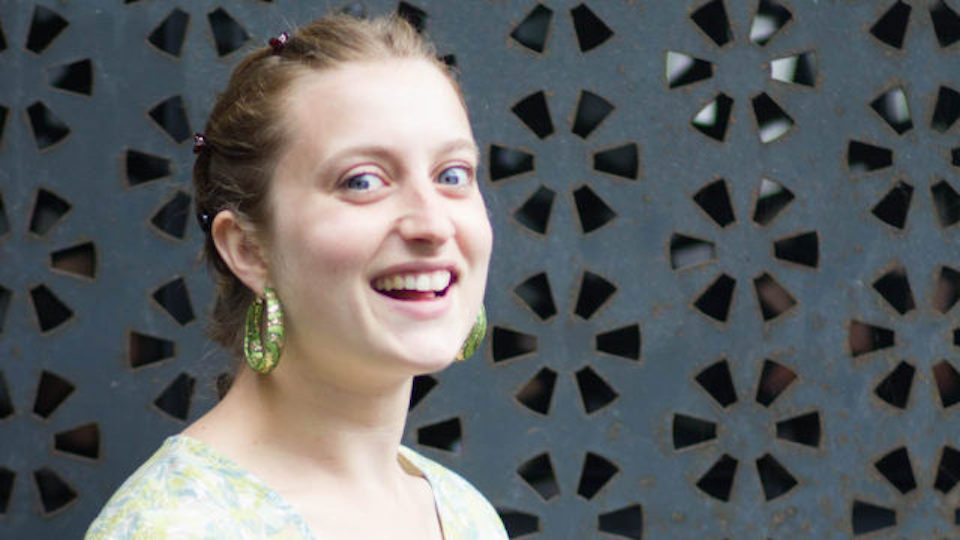 Funny Women Award winner 2016 Harriet Braine and her acoustic guitar are back at the Edinburgh Festival Fringe with work in progress hour: Apocalibrary.

Set in a library at the end of the world, just five years from now, in 2023. Turns out that Trump literally broke the internet – ‘the pee tapes leaked everywhere’ – and it’s truly the end of days. Not even a ‘dick pic’ can be exchanged, they have to be hand drawn and popped in the post. (I wouldn’t like the job of licking the stamps.) And so we’re left with Harriet Braine, as a government-appointed Apocalibrarian, who must now answer pre-recorded telephone enquiries from frightened and confused members of the public (mostly trolls and troglodytes). Armed with her guitar and only one Scots Language edition of Harry Potter and The Philosopher’s Stone, she finds herself as a ‘Wikipedia and Google replacement therapist’ with very limited resources.

In real life, Harriet is a former History of Art student who works at the National Maritime Museum in Greenwich. I can’t help but imagine that if her stage was set with dusty old books, papers and an eerie gramophone recording of her catchy ditty ‘Apocalibrary’ (set to the theme tune of The Addams Family) that it would really bring the audience in to her world as we entered.

As it is, we’re at the Free Festival, essentially shoved in a cupboard above a pub with nothing but a lamp, Harriet’s laptop – which she admits doesn’t tie in with the theme – and a black curtain to set the scene. Still, none of this dampens her fine musical talents. A work in progress, Harriet explains that some of the jokes will fall flat. Lyrically, though, she’s on top form. Transforming familiar melodies from Kate Bush, Elton John and Jacques Brel into cleverly constructed tunes about the likes of Sigmund Freud and William Holgarth plus a spot of ‘pat yourself on the back’ audience participation when we’re invited to shout out missing words in a number about landscape architect Capability Brown. One chap was thoroughly chuffed with himself for guessing the ‘-ability’ suffix more than once. A gag about Stephen Hawking made me laugh out loud (as Harriet pointed out, it’s not too soon in 2023) but of course there’s always room for improvement with a WIP.

The main difficulty Harriet faces with her crowd is keeping the energy up. As she chats between songs, the audience seemed far too polite to make noise. As you’d expect in a library, everyone’s smiling, nodding and very hush hush while listening to the well-written, tunefully sung homages combining pop tracks and niche historical figures. This is Harriet’s appeal, she isn’t doing this for the mainstream masses, and the audience queued up to stuff notes into her donations bucket. Despite the hour being low on loud laughs, it was a really enjoyable journey. One can only hope that it’s not a true prediction of what may happen in just ‘four more years’ or so…