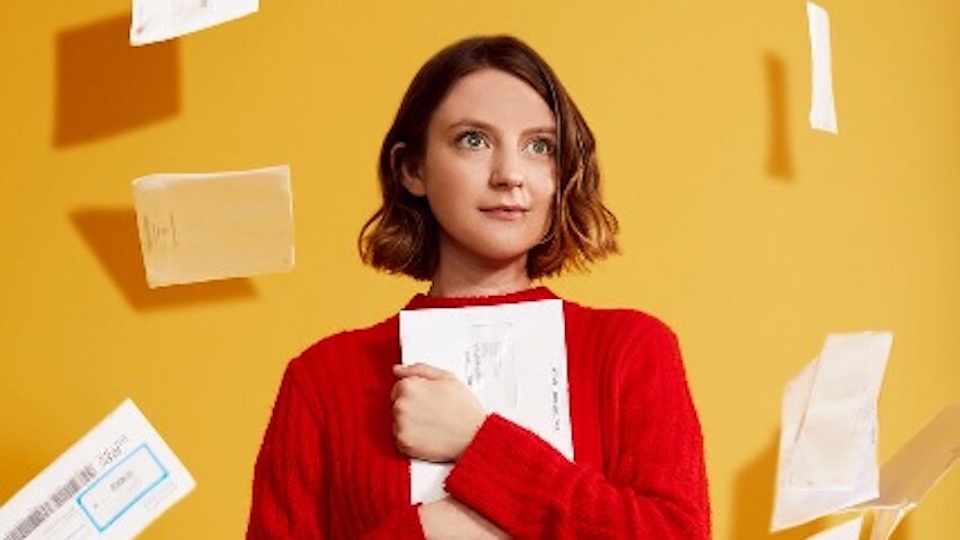 What better way to begin your day the Edinburgh Festival Fringe than with a reminder that London can be an unwelcoming, dirty and lonely city? Of course, any city can make you feel that way, even Edinburgh especially if you’re a tourist. So join the exceptional writer and performer Lydia Larson for an hour of humorous storytelling in Finding Fassbender at The Pleasance.

Lydia Larson’s one-woman play begins with a speech by our protagonist, Eve. In an endearing Brummy drawl, she’s giving a eulogy about her Aunty Sue. It turns out that Imran, Eve’s boss, has offered her a promotion on the same day her Sue died. Eve has a partner, Rich, and a cat, Steve, who she loves. Still, she’s yearning for something more. Moving to work in London is ‘something you should do, isn’t it?’ The somewhat obvious inclusion of a flashforward sees the eulogy of Eve Louise Thomas: a wife and mother who worked the phones for 40 years. Lydia wants us all to know that Eve is so much more than that, and that we all have the potential to use our imagination.

With ambitions beyond Wolverhampton, Eve decides to test her mettle even though she she’s never travelled further than 20 miles alone. Sick with nerves, she arrives at the fancy London office, which is a world away from the container in a car park that she’s been used to. The narrative moves quickly as Larson manages to paint a perfect picture of London living, in a grimy flat share with disappointingly disinterested strangers. All captured through dialogue, Lydia Larson’s skills as a storyteller and mimic holds the room’s attention. Lydia breathes life and soul into her dialogue, leaping between distinct character’s voices and mannerisms. Clear direction from Blythe Stewart and the inclusion of music and sound effects make Lydia’s task appear easy.

We’re hanging on every word as Eve experiences her very first London night out, with expenses covered by the company. Of course, after being momentarily swept up in the city swirl, Eve’s soon spat out. Just as Eve’s about to give up on her miserable London existence and return to the Midlands, she spies a letter addressed to Michael Fassbender among her post. Turning detective, Eve finds out he once lived in her flat. She becomes obsessed with returning the letter to Fassbender, researching his hobbies, tastes and London haunts that he may still frequent. Eve grows with the mission as she fantasises about meeting Fassbender and even becoming best pals. Silliness and near-misses abound as Eve goes on an amazing adventure trying to track down the elusive actor.

Will Eve succeed? Will Michael receive his letter? Will she stay in London? Ultimately, that’s all by-the-by. This isn’t a story about Finding Fassbender, it’s about finding Eve and her enjoyable journey of self-discovery.