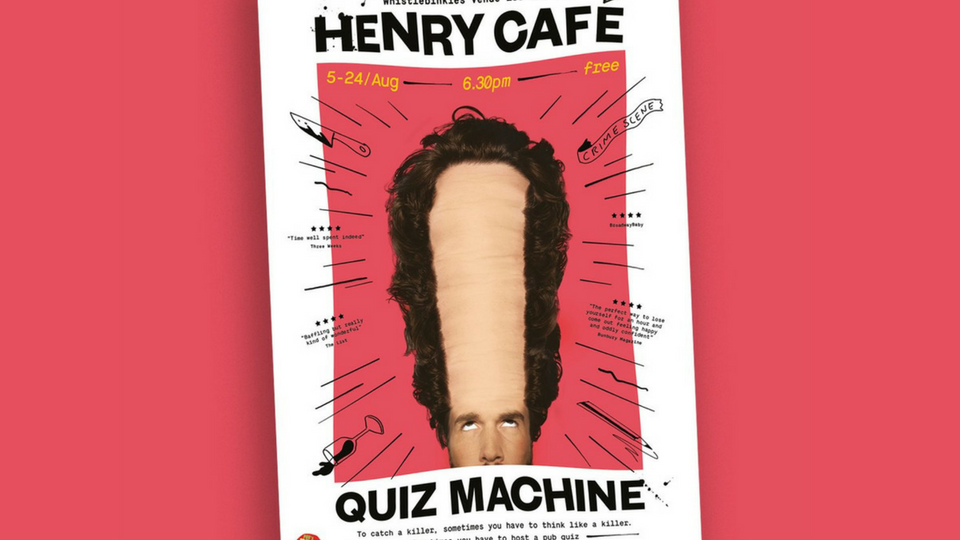 Sometimes you just want to see a show in Edinburgh that has Henry Café: Quiz Machine’s promotional blurb: “Auntie Pam’s dying wish was for Henry to do a pub quiz at her wake. Henry suspects she was murdered, and so rigs the quiz to catch the killer. Each round generates clues to catch the killer but it quickly becomes clear that Henry himself is being framed for a murder he didn’t commit.”

Harry Carr’s latest offering Henry Café: Quiz Machine is a completely surreal show on the face of it. However beneath this are exceptionally well observed nuances of a provincial pub quiz (ridiculous team names include Badgers For Justice).

Absurdly set at a wake for Henry’s recently deceased auntie Pam, the audience double up as guests at this unconventionally upbeat point-scoring murder-mystery memorial service. We are locked-in for some textbook silliness that wouldn’t fail to delight the grumpiest rain-soaked festival goer as we are taken through the rounds.

Comedy at the fringe has the potential to get too serious, preachy or miserable, with many comedians using it as a platform to talk about their own lives, which can sometimes leave you with less energy than you walked through the doors with. Harry happily avoids this in the name of pure comedy entertainment with his PBH Free Fringe show that captures the true essence of the festival.

He is a master of  providing accessible and crowd-pleasing surreal comedy that you’ll be glad you’ve experienced. He has a rare talent for finding the surreal in the ordinary. We are taken on a unique comic journey with characters who are a fair few steps removed from an identifiable reality yet they manage to retain a sparkling glimmer of the universally familiar and obscure.