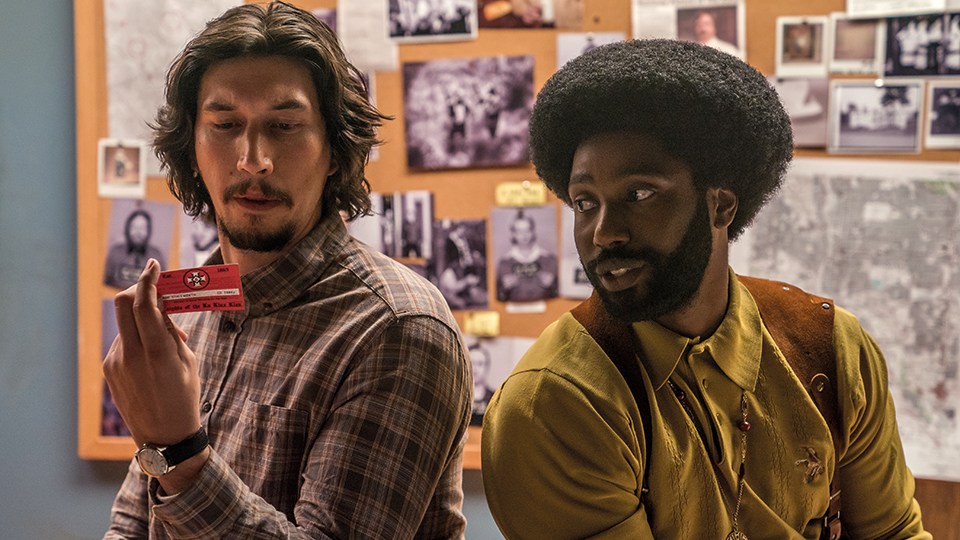 Adapted from Ron Stallworth’s 2014 autobiography, and set in the 1970s, Spike Lee’s latest directorial outing is the stranger-than-fiction true story of the first African-American detective in the Colorado Springs Police Department. Played out against a backdrop of racial tensions and violence, Stallworth (John David Washington) is brought into the Colorado force to ‘break it open’. A tenacious rookie, not content with his lot of pulling files in the record office, Stallworth formulates an unlikely plot to infiltrate the Ku Klux Klan when he spots their number in the local paper advert. After Stallworth delivers a phone performance as a white racist extremist, the Chapter President is keen to meet him and Flip Zimmerman (Adam Driver) is enlisted to act as Stallworth’s undercover stand-in to infiltrate and investigate the group. Stallworth continues his phone conversations with the local chapter of the KKK and in a fluke of admin, actually ends up forming a close relationship with Grand Wizard, David Duke (Topher Grace). What follows is a daring series of events in which Zimmerman, a white Jewish man, puts his life at risk, in order to gain membership to the group. Things come to a head when the Grand Wizard comes to town and the violent plot escalates.

Lee and the film’s writers have achieved no mean feat, BlacKkKlansman is a flawless portrayal of a true story, which undermines aggression with comedy. From a plot synopsis, it’s hard to imagine that the film could contain as much humour as it does, but much of the impact is delivered through biting, take-down punchlines.

Throughout the film we see the Grand Wizard’s attempts to normalize the image off the KKK as he tries to put a positive gloss over abhorrent views, rebranding them as ‘The Organization’ and spinning core values not as hate, but as just wanting everyone ‘to stay with their own kind’. Inside the KKK Chapter meeting there’s the jarring juxtaposition of tea and cake with murderous intent and the KKK answerphone message is comedic in its breezy tone. The film later shows real life contemporary footage of Duke quoting Donald Trump to justify his ideology and the rhetoric of the last Presidential election is woven throughout.

BlacKkKlansman also poignantly depicts the internal conflict of the protagonists. Zimmerman is Jewish but ‘wasn’t raised to be’, he’s accused of ‘passing’ as a WASP and Stallworth tries to push him to realise that he has ‘skin in the game’. Stallworth is a black policeman, seemingly fitting in nowhere: labelled a pig by his radical student union president love interest Patrice (Laura Harrier), whilst also being violently and verbally attacked by his own police colleagues. In spite of the ultimate success of Stallworth’s undercover operation, there’s no justice, triumph is swept under the rug and crosses still burn.

BlacKkKlansman is flawless, important and timely: an essential watch and gripping throughout. Washington portrays delivers the razor-sharp script with perfect deadpan timing and finesse. The final montage of real news footage taken from 2017 contains no humour, just bleak, present-day reality, sledgehammering home the fact that this is still America and little has changed.