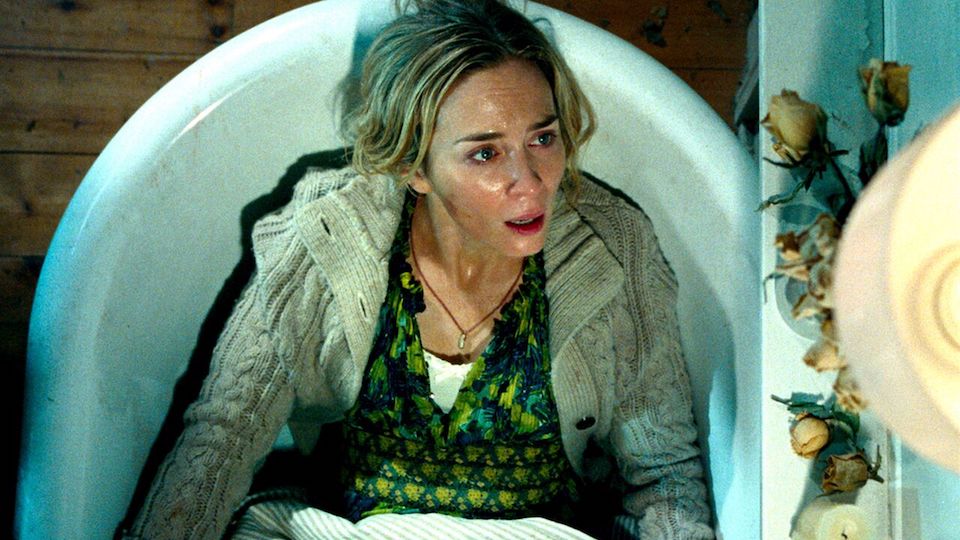 I first saw A Quiet Place a few weeks after its initial release. I went on a weekday afternoon and had the entire screen to myself. It was without a doubt the perfect conditions in which to see this film. No popcorn being loudly munched. No sweet wrappers being rustled. No drinks being slurped. No phones going off. And most importantly of all, no obnoxious, entitled idiots talking all the way through the film. It was bliss. Sweet, terrifying, intense, nerve shredding bliss.

It did make me wonder however, could this experience ever be recreated at home. The answer is a resounding yes. John Krasinski’s stripped down apocalyptic thriller has lost none of its potency. Set in a post-invasion America, we follow a young family surviving in the countryside. The alien presence hunts by sound, and the only way to survive is to make none at all. The stakes are set in the incredible opening scene, where the film grabs you by the throat and never lets go for the next 90 minutes.

Krasinski and Emily Blunt play Lee and Evelyn, who along with their children Marcus (Noah Jupe) and Regan (Millicent Simmonds) are living a soundless existence somewhere in rural America. They go everywhere barefoot. Bags of sand have been emptied along every footpath they walk across. The floorboards in the house have been painted with where it is safe to step without making a creak. Due to Regan being hearing impaired, the family are able to communicate via sign language. This is why they have lasted so long. Nobody makes a peep. Because if they hear you, they hunt you.

They in this scenario are the invading creatures. These brilliantly designed monsters are truly the stuff of nightmares. Shrieking and skittering, these spider-like beasts are blind, hungry and have gaping maws full of razor sharp teeth. They hunt and navigate by sound and can hear the tiniest pin-drop from miles away. When a rusty nail is exposed on the steps leading to the basement, you will be holding your breath and praying that an unsuspecting bare foot doesn’t find it.

You would hardly expect anything else, but Emily Blunt is just brilliant. It is an absolute powerhouse performance that will leave you exhausted and emotionally drained. You’ve probably already seen the film, and therefore know what her character goes through. However, without going into spoilers, at the heart of the film there is a centrepiece sequence, during which she is nothing short of sensational.

She is very much matched by the brilliant Millicent Simmonds (star of last year’s Wonderstruck) who is deaf in real life. She brings a real sensitivity and understanding to her portrayal of Regan. Whilst her hearing loss has helped prepare her family to survive in this world, she is in the terrifying situation of not being able to hear if they are in danger. This is superbly conveyed by the film’s excellent sound design.

The blu-ray disc comes with three short behind-the-scenes featurettes. Two of these focus on the sound design and the visual effects, with the other being a more comprehensive making-of the film, with contributions from all the main cast and crew.

In a lot of the publicity for the cinematic release of A Quiet Place, Krasinski talked about not being a big fan of horror because he finds it too scary. Well that might be the case, but he certainly understands the mechanics of the genre. He expertly builds and releases tension, each time just cranking it a little bit further. He quickly establishes a unit of characters we care deeply about. And of course, when it comes time to execute a scare, he’ll have you jumping out of your seat. Not bad at all for a guy who doesn’t like horror.