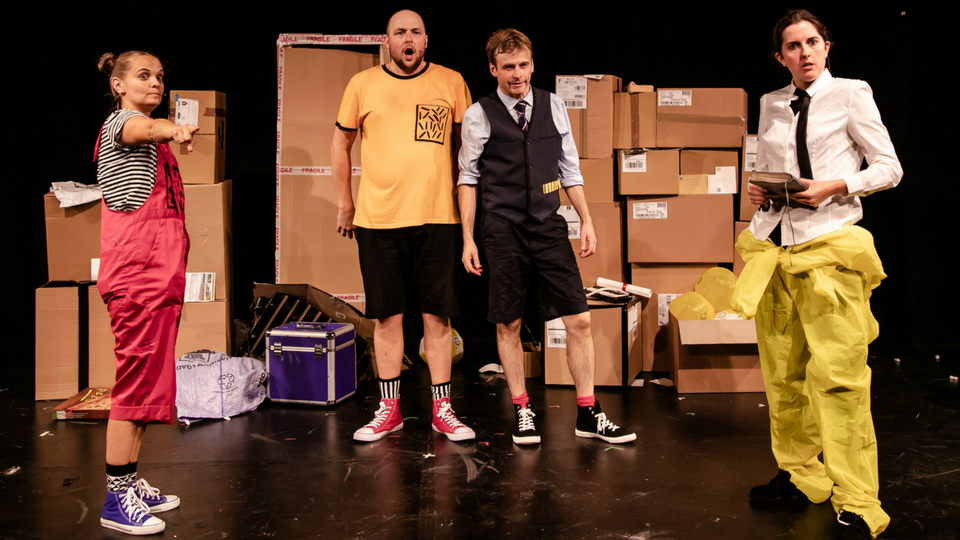 Kafka for Kids? You wouldn’t expect to find the works of Franz Kafka under Children’s Fiction in your average bookshop (unless, perhaps the owner’s Bernard Black from Channel 4’s Black Books), but writer and comedian Tom Parry (one-third of successful sketch group Pappy’s) and director Russell Bolam have recognised how comical and absurd many Kafka stories are. Hence the weird and wonderful Beetlemania: Kafka for Kids has arrived at the Edinburgh Festival Fringe.

The Czech author, known for such disorientating works as The Trial, The Castle and Metamorphosis, found his own stories hilarious. Apparently, he laughed so hard whilst reading the first chapter of The Trial aloud that he repeatedly had to stop to collect himself. Without actually having read any of his work, many people (yours truly, guilty as charged) think they have a sense of the world Kafka wrote about. Bureaucratic nightmares, unexplained events, confusion over being the victim of circumstance…Waking up one morning to find you’ve morphed into a giant beetle (with a pretty good John Lennon impression in your comedy arsenal) only to find that pest control have arrived at that very moment.

As Karter (Will Adamsdale) sings a welcoming song at the top of the show, immediately, a Kafkaesque jobsworth (Rose Robinson) storms over to challenge him for not having paid for a ticket, ears closed to his reasonable protests, she insists he stump up the cash to the very last 20p. There’s dark moments, magical moments and genuine laugh-out-loud moments throughout this dreamlike hour with Karl (Tom Parry), Karter and Kat (Heidi Niemi) acting out short stories such as The Bucket Rider (cruelly refused coal by a coal seller he’s given business to year-after-year), Poseidon (being god of the sea just means an endless under water admin job), and Blumfeld, An Elderly Bachelor (whose existence is dogged by the sudden appearance of two bouncing balls). For the part of grumpy old Blumfeld, a little boy in the crowd volunteered to play the part – smiling widely the entire time – he stole the show!

With nothing more than cardboard boxes, bubble wrap and packing paper, the world of Kafka’s imagination is brought to life and a silly subplot keeps tension building as we move through each short story towards a creepy-crawly crescendo. Tom Parry possesses a unique flair for writing and performing sketch comedy. He delights in silly puns, childish punchlines, and generally making a fool of himself. Tom’s energy draws a childlike joy out of everyone watching, including his fellow cast members, who are clearly loving every minute on stage.

You don’t need to have kids with you to enjoy this play, there are plenty of adult jokes to tickle older funny bones. If you want to teach your kids about great comic timing, and that not all stories end happily, fairly, or even come to an end at all, then take them to see Beetlemania: Kafka For Kids.