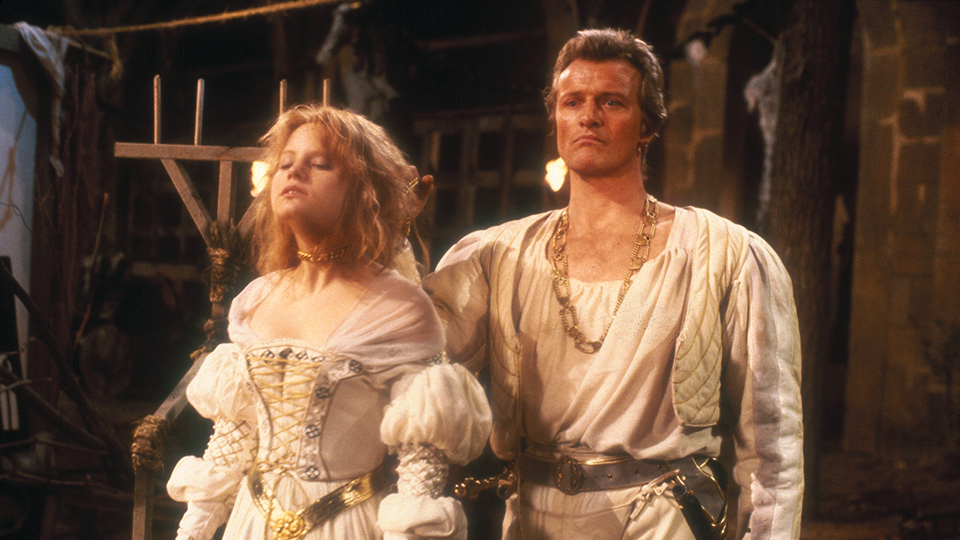 In Western Europe, 1501, a small army of mercenaries led by the charismatic and mercurial Martin (Rutger Hauer; Blade Runner, The Hitcher) reclaim a heavily fortified castle for its owner Arnolfini, who then betrays the band and ejects them from the city by force. Swearing revenge, Martin leads a violent assault on the nobleman and ends up accidentally kidnapping the beautiful Agnes (Jennifer Jason Leigh – The Hateful Eight), the fiancée of Arnolfini’s son Steven, who in turn pledges to wipe out the mercenary group once and for all.

With its vision of a brutal and morally bereft Medieval Europe, the film shocked audiences who had become used to the highly romanticised depictions of the era commonly seen on the big screen. Originally censored in the UK due to its extreme amounts of sex and violence, Eureka Classics is proud to present Flesh + Blood fully uncut, and on Blu-ray for the first time in the UK in a special Dual Format edition.

Flesh + Blood, Paul Verhoeven’s irresistibly entertaining medieval epic is out now on Dual Format and can be purchased here https://amzn.to/2zPDnJO.

To celebrate the release, we have 3 copies on Dual Format to give away. Enter below for a chance to win…

In this article:Eureka Entertainment, Flesh + Blood