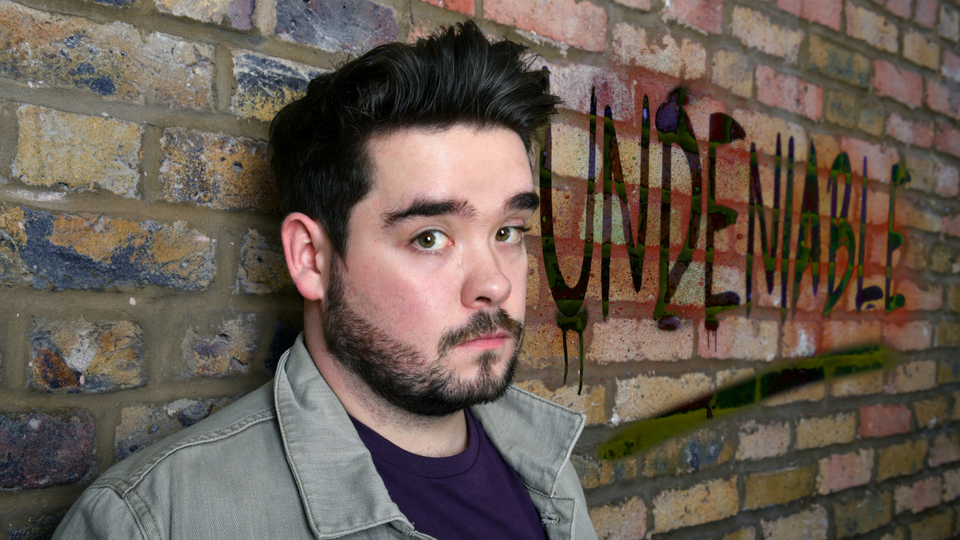 Adam Rowe takes his third show to the Edinburgh Fringe this year with Undeniable, a autobiographical exploration of his working class background and how it has benefited his path towards a career in comedy, and how he has turned his biggest weakness into his biggest strength.

The Liverpudlian legend has been enjoying wider success among UK audiences thanks to a series of viral comedy videos, clocking up more than 50 million views, including one about an ex-girlfriend and another about an argument with an 84 year-old woman in Greggs.

His new show promises more of his trademark brutally honest stand-up style, looking back over his childhood in Liverpool and how its challenges have presented the tools to ‘work his socks off’ and forge a professional comedy career over the last five years doing what he loves, sometimes ‘four, five, six or seven times a week’.

At just 26, it’s certainly undeniable that he is wiser than his years, speaking directly from experience and to broad appeal. He’s determined to take the lessons he’s learned and characteristics he’s developed from these circumstances, and use them to get absolutely everything he wants from life.  This is an inspiring and uplifting show about how you can achieve anything you want, regardless of where and what background you come from. Adam says “The show’s about how you get given a set of skills by your upbringing and that will lead to something else. It looks at how your class, upbringing, attitudes and emotions can lead to good or bad decisions and it’s up to us to find out what skills we have. I think a poor background set me up to have a successful career in comedy and i’m glad that I had it.”

He had a total sell out at last years Fringe as well as a sell-out UK tour with his show ‘Unbearable’, both of which were entirely self-produced.  Clearly, Adam has an extremely strong work ethic, which he traces back to his upbringing. “I’m glad that I went through what I went through as a child and as a teenager as I don’t think i’d be as prepared for life as I am now. People do get advantages from a privileged background, and that extends to starting out on the comedy ladder. if you’ve always got a bit of money in the bank, you can go to any gig at any time. For the first year of comedy you just don’t get paid, money goes on trains, petrol and so on, and you can have an easier ride if someone in the background is supporting you.”

However what’s clear from my chat with Adam is that this show isn’t a working class sob story, relating his lived experiences to the lives of the privileged and making comparisons, but quite the opposite. Undeniable plans to be a rallying call to those from disadvantaged backgrounds to celebrate their resolve and achieve unquestionable success. Adam continues, “I don’t want to be another person who’s moaning about not being privileged. Don’t just say ‘those guys have got an advantage and I’m annoyed’. Instead, I want Undeniable to get people to ask the question ‘OK, so how do I level that playing field? You can actually make the weaknesses of those who’ve had an easier path into your strengths. For example, if I was from a privileged background, i’d probably have a lazy approach to my career, if opportunities just fell into my lap. So in reality what that makes me today is determined to be successful, knowing that even if that does mean working twice as hard, I welcome it, and I am happy to do it. And, twenty years down the line, people will say ‘you know what, he’s worked his socks off, he’s earned that’ and no-one will be able to take it away from me. They won’t be able to argue with the success”.

I was keen to ask Adam how Edinburgh had shaped his comedic voice and subsequent tours, and he has noticed a shift in his material and what works for him, while maintaining consideration for what his audiences want. He says, “I’m changing my comedic voice with every show. This is my third show. My first show was about how lying as a general thing is better than telling the truth but there are some times where the truth is necessary, and last year Unbearable, was about how I deal with things and sorry if this makes me a bad person. It was broadly an extension of the routines I was doing in stand-up clubs.”

With the debut show, Adam took lessons that have stayed with him. “In my first hour I was probably guilty of doing a show that was designed to pander to the critics, which is the worst you can do as an artist.” I wondered if Adam agreed with David Bowie, who once said “the only real failure is trying to second-guess the taste of an audience. Nothing comes out of that except a kind of inward humiliation” and he was in slight disagreement here. “I do have to consider what audience wants but recognise that you cant please everyone. The key change I made was realising I needed to do what I wanted to do, as opposed to what I thought the Edinburgh critics wanted.”

In terms of learnings from last year’s show, the comic has extended his work, with a more analytical look at the reasons why he is the person he is, alongside why this is actually useful. He is keen to continue to grow stand-up audiences and has identified a clear link between the success of his online videos, “I’m very much working in tandem with live performances and online content. The latter helps me sell tickets for stand-up, which ultimately is my main passion. When people ask me what do I want to be, presenter, do TV, or a sitcom, I just want to be a fantastic stand-up comedian. There’s nothing better than doing stand-up.”

In a polarised digital age where people are quick to form ‘love or hate’ opinions of the acts they see in comedy, with little room for middle ground, I asked Adam what the most common misconceptions have been around his work, perhaps that he’s been forced to correct, and whether audiences were becoming precious in their response to controversial content? “The good thing about stand-up is that it happens in real time, and you can correct anything that people have misinterpreted. Of course there’s always going to be people who go home and write their blog saying ‘he said this and meant this’ but generally you can iron things out on stage.”

“I do feel that the majority of people who get offended don’t listen to the context of what’s being said, they’re just listening out for buzzwords, deciding where they personally draw the line for what topics can be discussed in comedy. Don’t get me wrong, there are some horrendous, cheap comedians out their who take cheap shots at emotive topics, and that’s wrong. But if I’m saying ‘we need to talk about this dark subject matter’, all I ask is that the audience listen to me, even after the begin to think ‘where’s he going with that?’ Listen and you’ll be fine. If you’re not listening and are jumping to conclusions, you don’t belong in a comedy club.”

Adam is planning on taking more time for himself at the fringe this year, to see some of the acts that he’s following with a keen eye, eager to share and support their work.