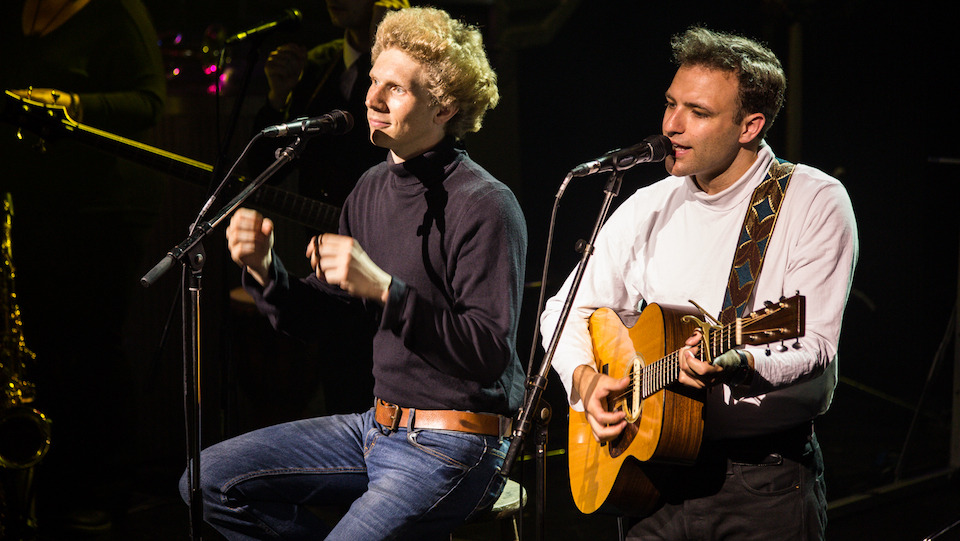 If you’ve never been a fan of tribute acts, believe me, I know where you’re coming from. I’ve cringed at the sight of many a crude Beatles mop-top. However, with the exception of their outfits and a fairly convincing curly blonde wig to reflect Art Garfunkel’s distinct head of hair, this is not a production about how much the duo look like Art and Paul. It’s about how they sound.

You could’ve heard a pin drop in The Lyric Theatre moments before the haunting opening verse of The Sound Of Silence opened the show. No-one’s ever going to truly match the rich sound of the iconic duo’s original vocals but, with melodic harmonies and impressive live guitar strumming, this version of Art Garfunkel and Paul Simon comes pretty close. Watching music performed live adds a layer of entertainment beyond sticking on the album. Given that Paul Simon played his final London gigs at Hyde Park last weekend, and we can’t step back in time, this show really is the next best thing.

Unlike some tribute shows in the West End, there isn’t a fictitious plot devised to string the songs together. Simon and Garfunkel’s story and their music speaks for itself. Performed in a concert style, Paul (Philip Murray Warson) and Art (Charles Blyth) take turns to act as narrator to the audience. Rather than affect unconvincing USA accents, Philip and Charles respectfully describe how two young boys from the same neighbourhood in Queens, New York, went on to become the world’s most successful music duo of all time. You really get the sense these two young talented musicians revere the songs they’re performing just as much as fans in the crowd.

As well as being entertained with a toe-tapping set list, you’ll likely learn a little something you’d not heard before along the way. It was news to me that Paul and Art had humble beginnings attempting to make it as a 50s rock n roll duo, Tom & Jerry, while they were still at school and launched as Simon and Garfunkel several years later. Taken through the timeline of their music, video projections of newsreel footage and iconic political images are played behind the band. TV commercials and cartoons from the 50s, 60s and 70s aid the nostalgia trip, too, leaving us all “feelin’ groovy” with The 59th Bridge Street song leading us into the interval.

With the second act a live brass ensemble joined the band to add even more oomph to the performance. A medley with instrumental hints of “You Can Call Me Al” and still shots of album covers and Art’s film appearances swept us through their solo careers succinctly. We’re here to remember them as the twosome, and, for all the impressive big band accompaniment, the highlights of the show are when the sound is stripped back to two voices and a guitar for the ballads. Scarborough Fair, Old Friends and, of course, Bridge Over Troubled Water were highlights. Prepare to feel goosebumps.

To date, The Simon & Garfunkel Story has been seen by over a quarter of a million people across the world and new dates have just been announced in the West End. The set list certainly won’t disappoint fans, all the big hits and some lesser celebrated gems are thrown in for good measure. An uplifting night of entertainment, well-executed and fully deserving of the rousing standing ovation.