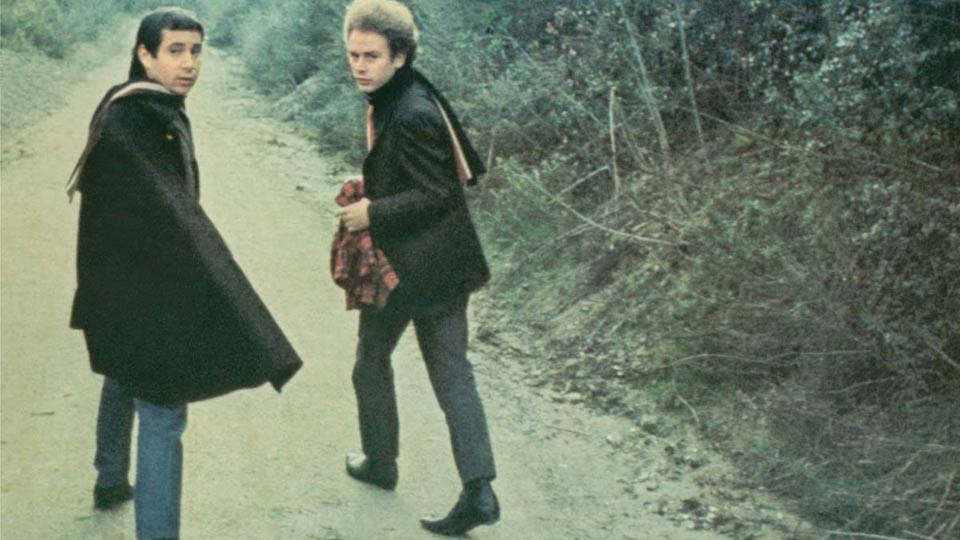 Sounds of Silence may only be Simon & Garfunkel’s second album, but in terms of defining their sound and lasting legacy, it is streets ahead of their debut, Wednesday Morning 3 am, and stands shoulder-to-shoulder with their greatest artistic achievements, such as Bridge Over Troubled Water.

The title song (as The Sounds of Silence) opens the album. It had already been released in acoustic format on their first, but this is the version familiar to listeners, adding a layer of electric guitars and percussion. The more heavily-produced sound suits the duo’s style. The inclusion of session musicians doesn’t swamp the delicate harmonies or lose the poeticism of the lyrics, but in fact accentuates them. It was an approach that would go on to define Simon & Garfunkel’s subsequent collaborations, as they contributed to the lasting sound of the 1960s.

In Leaves That Are Green, Paul Simon explores one of his favourite themes: nature and the passing of the seasons. April Come She Will, on the second side of the album, reinforces the cycle of life as central to Simon’s thinking. Biblical allusions are not uncommon in Simon & Garfunkel’s work either. Blessed are the meek, from the Sermon on the Mount, is from the Christian tradition, but Simon borrows it here for a song full of scriptural quotations and powerful imagery.

Kathy’s Song, covered by many, is a personal recollection, which adds to its poignancy, and Garfunkel’s vocals bring it to life perfectly. Somewhere They Can’t Find Me returns to the story tried at the end of Wednesday Morning 3 am (the original song title). Here, the fast tempo and stylistic urgency make it more compelling, even if lyrically, on the second attempt, it remains far from Paul Simon’s best work. The first side ends with the fine instrumental, Angie.

Suicide is the unusual subject matter that opens the second side, both in Richard Cory and A Most Peculiar Man. The protagonists are driven to take their own lives for different reasons, and whereas the Richard Cory story is full of drama and a touch of bombast, A Most Peculiar Man borders on the twee. After April Come She Will there’s another change of pace with We’ve Got a Groovey Thing Goin’, which is Simon’s answer to the feel-good, prevailing popular music of their contemporaries. The new direction is short-lived: I am a Rock is a loner’s classic, with suggestions of sexual purity and repression too. It isn’t the most comfortable of tracks, but following shortly after two songs about suicide, it’s indicative that in his writing, Paul Simon was determined to follow the folk tradition of using difficult subjects to tell tragic stories – his music is always nuanced and thoughtful, offering listeners a wide range of emotional responses. It was never intended as mere escapism, which is what came to dominate the charts.

With Sounds of Silence, Simon & Garfunkel launched themselves upon the world, finding and quickly establishing their niche. Their harmonised vocals had immediate appeal, and Paul Simon’s considered songwriting ensured that they endured. The Sounds of Silence may be the only outright classic on the album, but the others are a consistently high standard, without a single weak entry, and the variance of tone is skilfully handled. Sounds of Silence is a magisterial work, up there with the best of Simon & Garfunkel’s works. Sound of Silence has never sounded more sublime than on 180g vinyl.