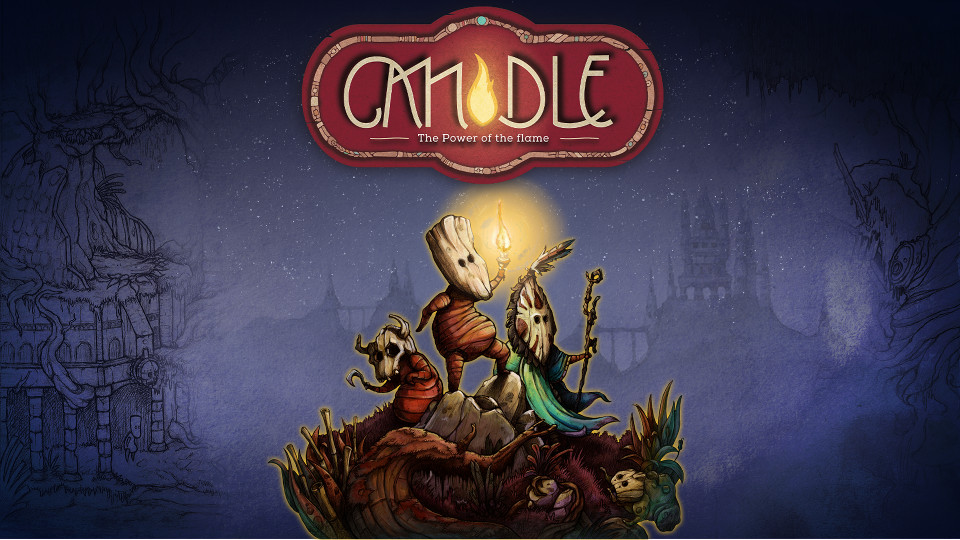 Candle: The Power of the Flame bestows a tragic story upon us straight away. A wonderful and prosperous world, tainted by the inhabitants within–until self destruction starts to take place and spread like wildfire throughout. You wake as Teku, the being tasked with finding the shaman of your village that will set a course to make things right again. It’s a powerful story that whisks us away and drops us right into the thick of things, hinting for real-world reflection in the process.

From the soundtrack, to the hearty and sincere narration, Candle: The Power of the Flame gets top marks for every bit of sound in game. The narrator was a particular treat and one that really threw me into the depths of immersion. The voice of a kindly old man cueing when Teku moves past, touches or gets stuck will chime in with a line or two is so beautifully delivered that’s it’s hard to not think you’re playing in a living storybook. It fits with the setting and theme so well, that it almost seems that Candle was built around it.

The characters are also a pleasure to listen to. They will communicate, albeit in a completely fictional language that sounds so very convincing. Another treat is the illustrations of actions in a sort of thought bubble. This one will be non-verbal, but will have a slideshow of animations describing an event with storyboard-like sequences. It’s clever, unique, well done and totally universal to understand.

Watch the Candle: The Power of the Flame trailer below:

As the title of the game suggests, you will indeed have the ability to use a candle at your disposal, along with a selection of items. The candle is used for solving puzzles amongst other things, like scaring critters away (usually in the hopes of climbing another rung on the progression ladder). The puzzles are challenging and will not hesitate to pick at your brain. Aside from the clues, the narrator will chime in and give tips once in a while–there’s nothing in the world that overly stands out to solve. No glittering items, or highlights otherwise. Candle wants you to think. And think is what you will do in playing.

Painted worlds of lush backgrounds and unique character designs grace Candle: The Power of the Flame as a headliner. Everything feels so fresh and new with every little critter and being that you run across…it’s an absolute delight to feel as if you’re stepping into an interactive mind of a gifted artist.

As per usual, even the most promising games can be plagued with some setbacks. My biggest frustration with Candle in the Xbox One version is the size of the text, menus and prompts. As Teku moves a bit slower and his running isn’t at Sonic the Hedgehog rocket speed, I feel the overall screen could have been a bit closer to the main character at times. If I had to venture a guess–the design choice to make the camera panned out was one with the art of Candle in mind.

View some screenshots from Candle: The Power of the Flame in our gallery:

The controls, even with Teku running freely and without a stamina meter to drain, feel very laboured. Indeed there is a proper move for everything you’re meant to do–but it’s how it’s executed that’s the trouble. Teku doesn’t come without a certain amount of inertia in his run which I tend to enjoy, but his turning leaves something to be desired. Simply moving around feels sluggish–even for a game that firmly plants its roots in its storytelling abilities–the control scheme feels like an afterthought.

It’s a lovely title, one full of wonderment and made with obvious passion…yet it feels terribly niche. Younger children might find the plot disturbing at times, especially with some very vivid visuals of destruction and some sinister-looking villains. Matched with the style of the art, and you have something that can be interpreted as quite dark. The controls are for the patient–anyone playing that doesn’t hold this virtue (I’ll be the first to come forward) might find themselves overly frustrated quickly. I think the smaller things, such as text on screen can be easily fixed with a patch, but I’m left with a sense of dread over the controls being the way they are. As for the puzzles, art and otherwise–it’s very discretionary and I’ll leave it to you to decide if Candle: The Power of the Flame is an adventure willing to embark on.

Candle: The Power of the Flame was reviewed using a digital code supplied by the publisher.

Advertisement. Scroll to continue reading.
In this article:Candle, Merge, Nintendo Switch, PS4, Teku Studios, The Power of the Flame, Xbox One