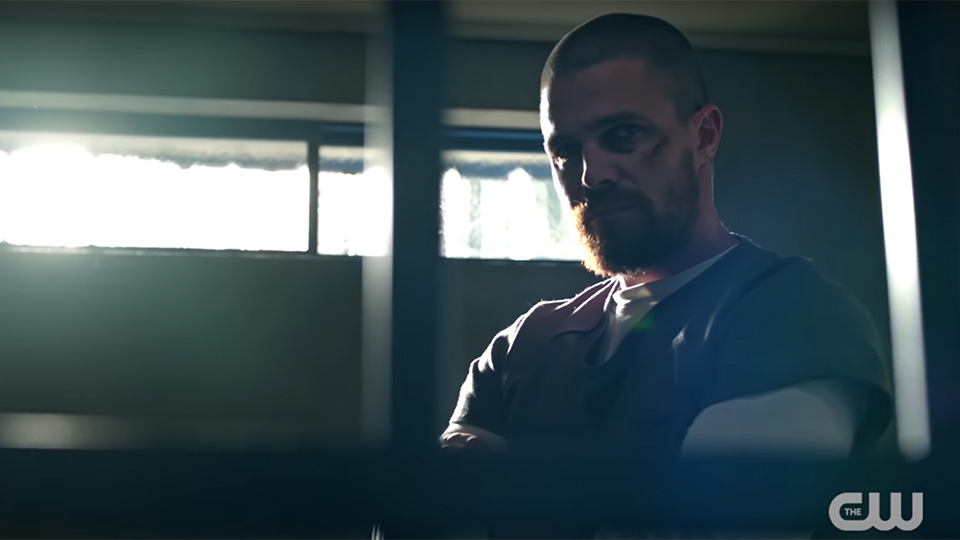 The first trailer for Arrow season 7 debuted last night at San Diego Comic-Con and it features a fair few spoilers.

If you don’t want to know some key plot details, we suggest you stop reading this article right now.

At the end of season 6, Oliver (Stephen Amell) was arrested after admitting that he was the Green Arrow. Now in prison, the trailer reveals that five months have passed when the show returns.

Attempting to tow the line, Oliver refuses to fight with any of the inmates, which include a number of criminals he’s put away over the years such as Danny Brickwell (Vinnie Jones). Following a conversation with Diggle (David Ramsey), who reminds Oliver that resisting fighting back isn’t in his nature, Oliver is seen engaging in a brutal shower fight.

Meanwhile it looks like Black Siren (Katie Cassidy) is continuing to pass herself off as Laurel Lance and she tells the press that Star City will not tolerate vigilantes. No sooner has she said that but a new archer is in town and surely we’re not the only ones thinking it could be Roy Harper (Colton Haynes) are we?

The trailer reveals a huge spoiler by seemingly confirming that Ricardo Diaz (Kirk Acevedo) is alive. Of course, this being Arrow that footage could be misleading and be part of a dream sequence, but it looks like he’s going after Felicity (Emily Bett Rickards) and William (Jack Moore) as an act of revenge against Oliver.

Elsewhere in the trailer Rene (Rick Gonzalez) appeals to Dinah (Juliana Harkavy) to continue Oliver’s mission while he’s in prison and oddly there’s no sight of Curtis (Echo Kellum) at all.

It looks like the show is going to be having a massive revamp for the new season and the trailer has got us very excited.