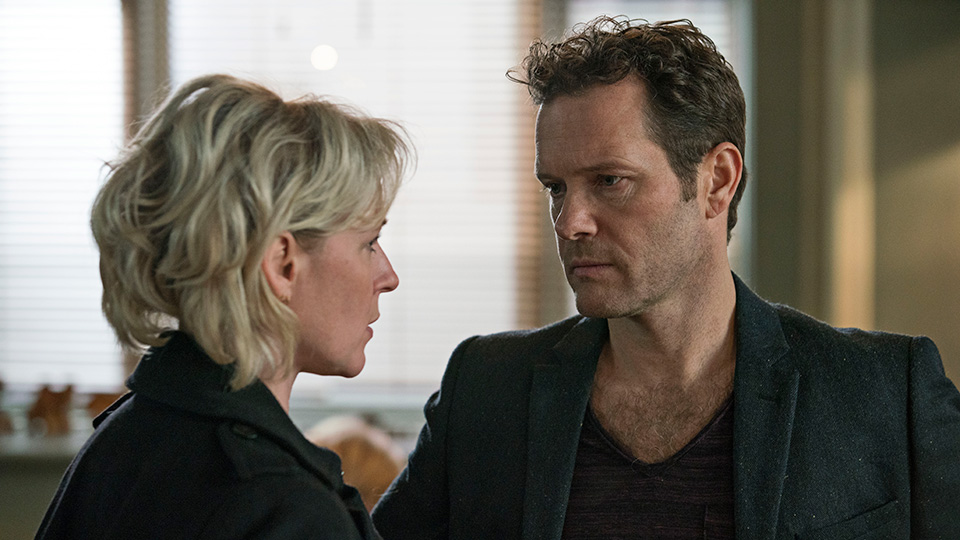 I must confess to having abandoned Dicte after a few episodes of series 1 when it came out a few years ago – it seemed overly fluffy and lightweight for my darker, more noir, sensibilities. But the fact that it’s now in its third series, and hugely successful in its native Denmark, suggests I might have been a little hasty in my dismissal of Dicte. And the opening episode of the third series is certainly gripping from the get go.

Dicte Svenden (the fabulous Iben Hjejle) and her journalist colleague, Bo Skytte (played by the excellent Dar Salim, a stalwart of Scandinavian drama having previously been in Borgen, The Bridge, Under The Surface and Trapped – as well as Game Of Thrones) have got married. But this is Scandinavian crime drama, so their initial joy is, of course, short-lived! Instead of doing the obvious and going on a honeymoon, Bo and another investigative journalist undertake a trip to the Middle East for work. Whilst travelling on a road to Syria, their car is rammed and they are taken hostage. The kidnappers force Bo to contact Dicte and read out their financial demands, with a threat to harm the hostages if the authorities become involved.

However, Dicte has problems raising the ransom; the newspaper’s insurance won’t pay, because Bo went on his own volition and is freelance, and the Danish Ministry of Foreign Affairs won’t pay because they refuse to deal with terrorists. She needs a negotiator – someone to speak to the kidnappers and get the ransom – initially set at $3m – down to something she can afford. Enter her policeman friend, John Wagner, who offers to act as an intermediary – despite him struggling with domestic issues of his own thanks to the arrival of his ex-wife. With the help of friends, many of whom generously sell valuables to raise funds, plus anonymous donations via the newspaper, money is quickly raised – but will it be enough?

Iben Hjejle is superb in the title role; the anxiety she displays for the welfare of her husband is palpable and intense. Praise too for Dar Salim who also gives an immaculate performance as the bullied and mistreated hostage, trying to remain calm and help his injured colleague.

But what impressed me most was the script-writing. Despite the gravitas of the subject, there’s plenty of understated wit and levity in the show. And there are some clever little lines, such as when the John Wagner asks the newspaper editor if he has known Dicte for long, he responds: “no – but we’ve argued ever since.”

The opening episode ends with an extraordinary revelation that urges the viewer to watch the next instalment. You could say I’m ad-DICTE-d.