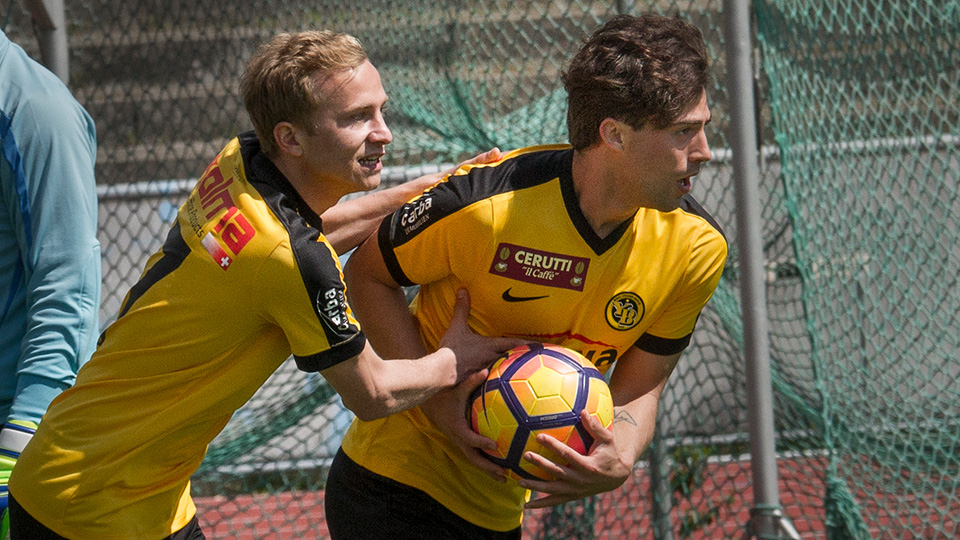 Promising young footballer Mario Lüthi (Max Hubacher) isn’t happy when new player Leon Saldo (Aaron Altaras) joins his club. Getting all the attention, Leon has his eye on quickly progressing to the next stage and his arrival forces his new team-mates to get competitive. Initially wary of Leon, Mario becomes friendly with him and the two are moved into a flat together as training gets underway. Their budding friendship soon turns sexual when Leon makes a move on Mario, which is initially rejected, and the two fall passionately for one another. As their relationship progresses, rumours start to circulate around the club and the couple is forced to choose between their careers and their feelings for one another.

Mario arrives in cinemas as the World Cup in Russia is coming to an end and it’s a particularly timely exploration of being gay in the world of football. Despite it being 2018, there are no out premiership footballers in the UK, only a handful that came out after their career had ended. Being gay in the sport is still seen as very taboo and without a doubt there are closeted players who are keeping quiet due to the fear of their sexuality impacting on their career opportunities.

In Mario, the players aren’t of the premiership standard but they are on the cusp and it highlights that even when players are working their way up the ladder, they still face challenges if they don’t present as straight. Mario is very keen to keep quiet about his relationship with Leon, whereas Leon is more open to being honest so they can fully explore the connection they have. Once the couple moves on from their initial sexual attraction, the film depicts a loving relationship that has the possibility of flourishing but the challenges that football presents takes a strain on it.

At points Mario reminded me of The Pass, the 2016 film starring Russell Tovey and Arinzé Kene, which tackled a similar subject. Mario is able to explore the issues in more depth than that film though and it’s interesting to watch how the football club reacts when they hear the rumours that their two star players are gay. The managers are keen to get them girlfriends to persuade everyone that they are straight and Mario is more than happy to rope in his friend Jenny (Jessy Moravec) even though she’s reluctant to live a lie for him.

Max Hubacher and Aaron Altaras are electric together. Their chemistry sizzles and from the moment they lock eyes on one another, you’re just waiting for their relationship to heat up. Both actors give stellar performances and they are convincing as a deeply in love couple facing a very difficult choice. Hubacher in particular really explores the conflict his character feels and you can understand, given that we see his family and the impact they have on him, why he behaves the way that he does.

Mario is an excellent film and it’s a fascinating exploration of a still very taboo subject. I hope that within my lifetime we get to a point where being gay in football, and indeed any career or industry, isn’t a big deal. Director and co-writer Marcel Gisler has crafted a very compelling and engaging film, and by the time the credits rolled I felt like I’d like to know what happens next for both Mario and Leon.