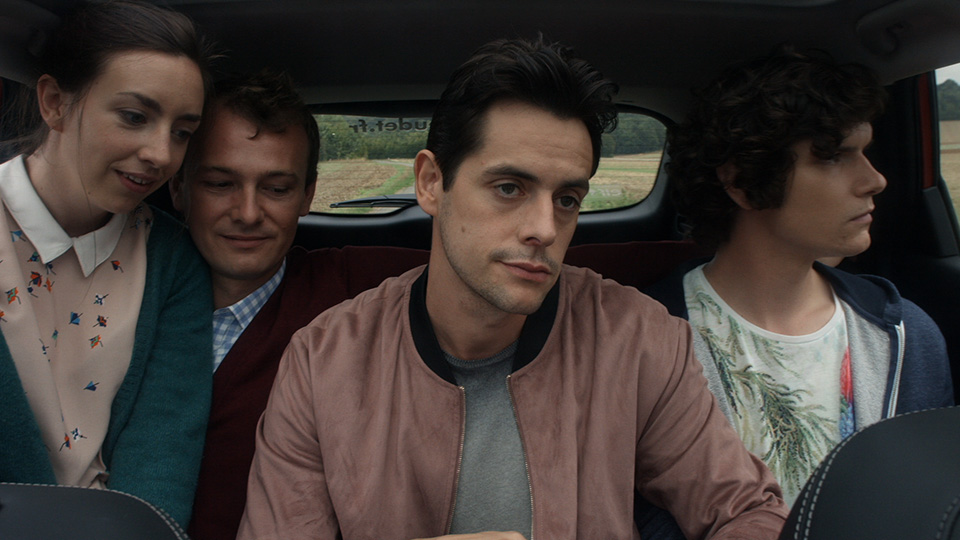 Film-maker Gérard Champreux (Johnny Rasse) is invited to showcase his new film My Life With James Dean in a seaside town in Normandy. Upon checking into his hotel, Gérard is underwhelmed by the reaction he receives from the local, none of whom seem all that bothered about his film. As he tours the film around, it begins to pick up steam and attract varied audiences, and he also catches the eye of projectionist Balthazar (Mickaël Pelissier) who becomes fascinated by both the film and Gérard.

My Life With James Dean is a breezy French comedy that delights in entertaining its audience. While the plot may often veer onto the side of silliness, it’s such a fun film to watch that you forgive it a fair amount. Gérard’s experience on his film tour gets more and more crazy as the film progresses and if you let yourself join him for the ride, there’s a lot of fun to be had. From the moody receptionist (Juliette Damiens) at the hotel where he’s staying through to the flighty programmer Sylvie (Nathalie Richard) who invited Gérard on the trip, My Life With James Dean is chock full of wonderfully bizarre characters.

When Balthazar starts to become attached to Gérard, he does everything he can to deter him. The young man is persistent and even learning that Gérard has an on/off boyfriend doesn’t seem to put him off. There is one snag however, in that Balthazar is only 15 and he hasn’t actually come out to his parents. As Gérard revels in drinking and hook ups, Balthazar isn’t put off and pushes forward with his pursuit.

There are a fair number of sub-plots going on during My Life With James Dean, including one involving an old woman who turns up to every screening. Interestingly though, the busyness of the film isn’t at all distracting and it adds to its charm. Even with little development for the supporting characters, they still make an impression and the ensemble are a lot of fun to watch.

Johnny Rasse is the star of the film without a doubt, shining as Gérard who is as hopeful as he is baffled throughout. Rasse is dashingly handsome so it’s understandable why men, and women, are swooning over him and he plays the role with plenty of humour. He seems to spark off the craziness that surrounds him and he has some fantastic scenes with Mickaël Pelissier, Nathalie Richard and Juliette Damiens.

My Life With James Dean is a nice escape from reality for a couple of hours. It’s actually refreshing to see a film made for LGBT audiences that doesn’t take itself too seriously and doesn’t drag you into a pit of despair. Writer/director Dominique Choisy has crafted a wonderfully fun film that stands up to repeated viewings and is endlessly entertaining. If you’re looking for something to put a smile on your face, My Life With James Dean could very well be the perfect choice.