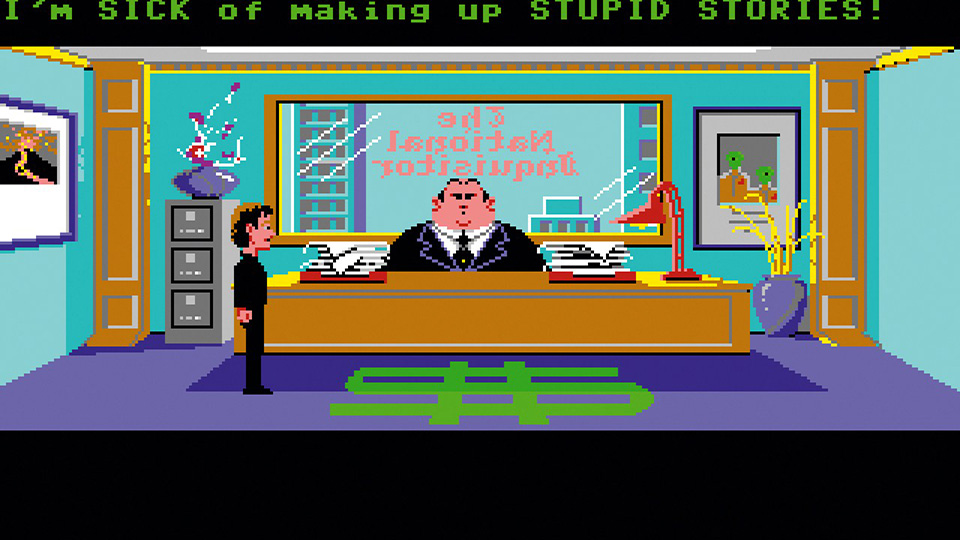 The genre has been having a bit of a resurgence on the current generation of consoles thanks to newly remastered releases and the excellent Thimbleweed Park from the team behind the classic Maniac Mansion. Point-and-click games take hours to play and they really do require you to think through what you’re doing in order to progress.

I’ve taken a look back at 10 classic point-and-click adventures that have stayed with me over the years and that I remember playing fondly when I was a kid.

The original point-and-click adventure, Maniac Mansion was devised by Lucasfilm Games employees Ron Gilbert and Gary Winnick. Critically-acclaimed during its original release and setting a new standard for storytelling in gaming, the game took place in the mansion of the Edison Family. Using multiple characters to work your way through the game, Maniac Mansion really was unlike anything that had come before it and it certainly set the template for the point-and-click genre moving forward.

The second game to use the SCUMM (Script Creation Utility for Maniac Mansion) engine, Zak McKracken and the Alien Mindbenders was developed by Lucasfilm Games under the direction of David Fox. Without a doubt, Zak McKracken is the most bonkers game, possibly of any genre, ever made. Set in 1997, the game saw players take control of journalist Zak, scientist Annie Larris, and Yale students Melissa China and Leslie Bennett as you tried to stop aliens from reducing the intelligence of everyone on Earth. The game was seriously tough and it involved flying all over the world in your quest. Bold, ambitious and addictive, it was one of my favourites growing up.

Lucasfilm Games really cornered the point-and-click market and Loom is one of their most under-rated releases. Much more serious, and a lot more complex, Loom followed the adventures of Bobbin Threadbare who could cast spells by playing notes on his distaff. It lacked the lighter feel and humour of previous games but it offered a new slant that no other point-and-click adventure had explored before.

One of the greatest point-and-click adventures of all time, and of course another Lucasfilm Games production. An involving, hilarious and thrilling ride, The Secret of Monkey Island put you in control of would-be pirate Guybrush Threepwood who does battle with Ghost Pirate LeChuck. The game was such a hit that it spawned many sequels and more recently episodic releases. In terms of story and fun factor, it takes quite some beating. It also inspired many games in the genre thanks to its biting humour and superb gameplay.

The first title in this list that wasn’t developed by Lucasfilm Games, Curse of Enchantia was a little gem that wasn’t quite as well-known as many others in the list. Developed by Core Design, the game is set in the fantasy world of Enchantia, which is under the rule of a coven of wicked witches. Gamers took on the role of teenager Brad who ended up in Enchantia via a portal. The story led up to a battle with the evil Queen in order to get Brad back to the baseball field he starts the game on. Influenced by the games we’ve already mentioned, Curse of Enchantia was a real hoot to play!

This adventure wasn’t an attempt to turn one of the hit Indiana Jones films into a game. Instead LucasArts opted to create an original story that say Indy searching for the legendary sunken city of Atlantis with the help of his former co-worker turned psychic Sophia Hapgood. The game was loved by critics and gamers, picked up awards and sold by the bucket load. It was more recently made available as an unlockable extra on the Wii game Indiana Jones and the Staff of Kings.

If you imagine Guybrush Threepwood as a nerdy magician, that’s what you got with Simon the Sorceror. Developed by Adventure Soft, and the first game in a popular franchise, Simon the Sorceror featured voice work from Red Dwarf’s Chris Barrie. Youngster Simon follows his dog through a portal and unwittingly ends up having to save a wizard called Calypso from evil sorcerer Sordid. The game really played on humour and it had a whole lot of charm that made it very fun to play.

The original (and the best) game in the franchise, Sam & Max Hit the Road brought to life the comic book characters in a quirky point-and-click adventure. Police officers, who also happen to be a dog and a rabbit, Sam & Max receive a phone call from the Commissioner who orders them to investigate a carnival where the star attractions are being set free. Sam & Max Hit the Road looked fantastic back in its day and it really captured the comic book feel of the characters’ world. Very, very funny and often a bit mad, it was a charming game that was very hard to stop playing once you started.

Recently remastered, Day of the Tentacle was a follow-up to Maniac Mansion. Another LucasArts title, the point-and-click adventure continued the story of mad scientist Dr. Fred Edison, who this time accidentally creates Purple Tentacle and his brother Green Tentacle. When Purple Tentacle flees to take over the world, it’s down to nerd Bernard and his friends to stop him and save the day. Day of the Tentacle continued in the same humorous and irreverent vein of Maniac Mansion and it’s since gone on to be a classic.

The final game on the list, and yet another LucasArts title, Grim Fandango is another game that’s been give the remastered treatment. Featuring the voice of Ugly Betty’s Tony Plana, Grim Fandango is a game of four acts that takes place in the Land of the Dead. Travel Agent Manny, who helps people move on to the Land of Eternal Rest, discovers that his bosses are working for a criminal underworld and rigging the travel system to con people. The game takes place over four years and it’s one of the biggest ones on this list. It’s more macabre than the other titles here but no less addictive and hilarious.

In this article:Curse of Enchantia, Day of the Tentacle, Grim Fandango, Indiana Jones and the Fate of Atlantis, Loom, Maniac Mansion, Sam & Max Hit the Road, Simon the Sorcerer, The Secret of Monkey Island, Zak McKracken and the Alien Mindbenders