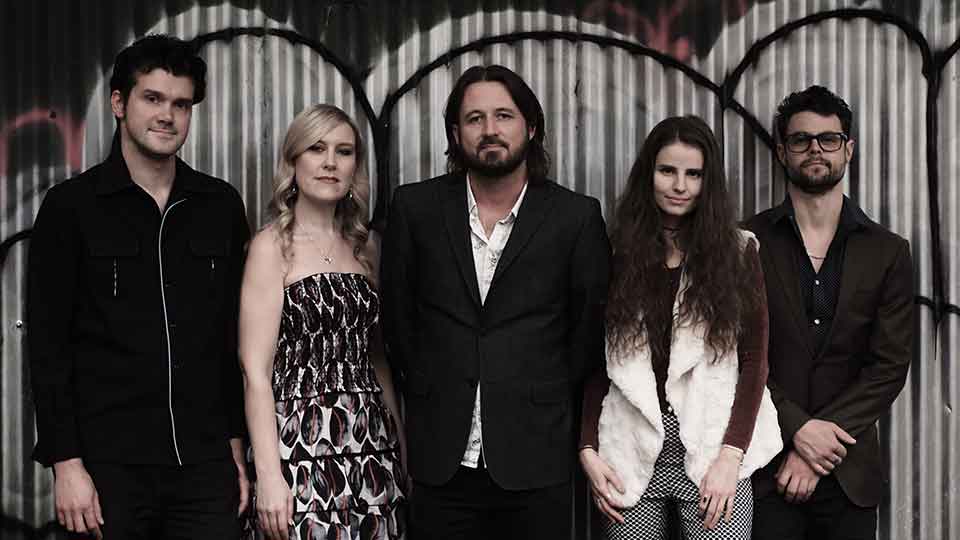 Originally from Melbourne, Lachlan Bryan and The Wildes have been one of Australia’s leading Americana acts since they first emerged in 2009. Their album Black Coffee won the 2014 Golden Guitar Award for Alt-Country Album of the Year, and they’ve toured with the likes of Joan Armatrading, Steve Earle and John Hiatt. Now they’re releasing their fourth album, Some Girls (Quite) Like Country Music, in the UK after winning critical acclaim back home.

The album opens with lead single I Hope That I’m Wrong. It’s a bittersweet, slightly folky track with socially conscious lyrics inspired by the #MeToo movement, but with a sense of optimism that stops it from being too downbeat. I also really liked the bluesy quality and raw edge to Bryan’s voice, which is enhanced by the simple arrangement of the song.

Throughout the record the band draw on a variety of styles, from the cautiously romantic yet uplifting Careless Hearts, which wouldn’t sound out of place in a honky-tonk bar, to It Tears Me Up (Every Time You Turn Me Down) which combines a Western swing rhythm and plenty of twang with resigned lyrics. Meanwhile, the lilting acoustic number Basics Of Love puts you right in the scene with its titular couple, and Bryan’s voice sounds great with the warm, sweet tones of Shanley Del and the bright acoustic guitar melody.

One thing which particularly stood out to me on the album was the quality of the songwriting. Songs such as Portrait Of The Artist As A Middle Aged Man with its steady pace and sense of foreboding, the swampy portrait of an ex-lover on Stolen Again and the yearning, almost acapella Peace In The Valley are packed full of details which really bring their characters to life. That said, Bryan and the band are also great at evoking a sense of place, particularly on In New York with its Joni Mitchell references and the almost acapella Cemetery Near My Hometown. They’re incredibly skilled at creating vivid, fully realised stories within their songs and making you feel completely immersed in the scene.

One of the standout songs to me was Sweet Bird Of Youth. The track begins with a gentle piano intro which adds a gospel influence and almost spiritual feel. Bryan really shows off the gravel and richness in his voice on the song as he sings about looking back on his younger years, with a nice balance between missing his old life and not wanting to go back there, and the sparse guitar solo adds a nice extra touch. I also really liked Don’t You Take It Too Bad, a dreamy duet with Americana star Lindi Ortega. Bryan and Ortega’s voices blend really nicely together and, whilst the song feels sad, it’s kept just on the right side of mournful with beautiful imagery, lush violins and some jazzy piano flourishes.

The album closes with Someone You Know So Well, a ballad about being in a long-term relationship. For me it really sums up the album – a stripped-back arrangement which allow Bryan’s vocals and lyrics to shine through, with a sense of nostalgia and the tug between wanting to grow up and being drawn back to the places you call home. The song put me slightly in mind of U2’s 1980s heyday and added a great sense of the album coming full circle with its positive ending.

Bryan has been describing Some Girls (Quite) Like Country Music as the group’s most ‘adult’ album to date, and it’s certainly a grown-up record that will appeal to lovers of traditional country, blues and Americana. With some excellent songwriting, solid vocals from Bryan and a good balance between light and dark, it’s sure to win over plenty of new listeners as well as having lots for the band’s current fans to enjoy. The only thing I’d say is that I’d have perhaps liked one or two more uptempo numbers, but overall it’s a great album and well worth taking a listen to.

Track list: 1. I Hope That I’m Wrong 2. A Portrait of the Artist as a Middle Aged Man 3. Careless Hearts 4. The Basics of Love (featuring Shanley Del) 5. Sweet Bird of Youth 6. Don’t You Take It Too Bad (featuring Lindi Ortega) 7. It Tears Me Up (Every Time You Turn Me Down) 8. Stolen Again 9. In New York 10. Peace in the Valley 11. Cemetery Near My Hometown 12. Someone You Know So Well Record label: Lachlan Bryan and The Wildes Release date: 29th June 2018

Lachlan Bryan and The Wildes are currently on tour in the UK – here’s where you can see them live:

In this article:Lachlan Bryan & The Wildes