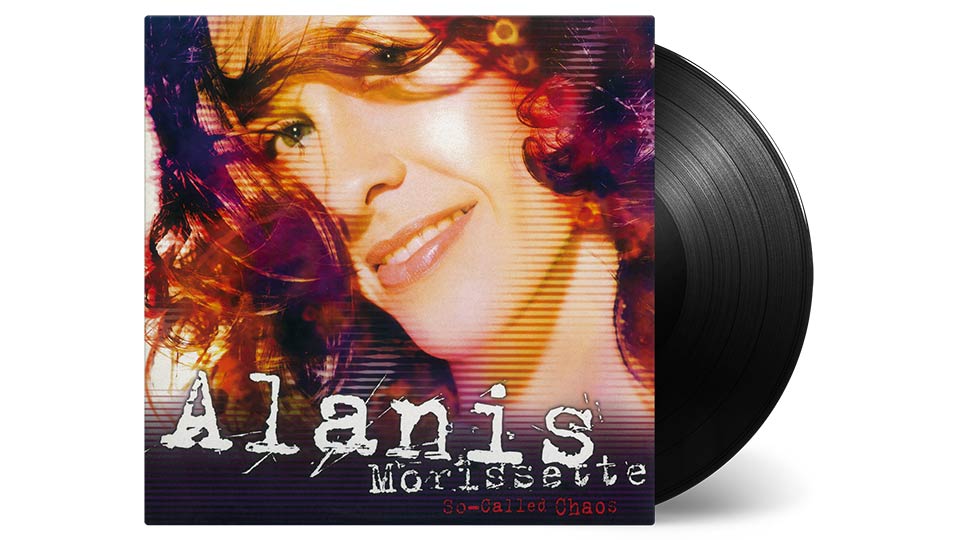 Music on Vinyl are really spoiling us Alanis Morissette fans this year with the reissues of some of her albums on 180-gram vinyl. Following the release of the very under-rated 2008 album Flavours of Entanglement, a reissue of Morissette’s 2004 album So-Called Chaos has just arrived. Once again it’s a 180-gram release and it provides another reason to revisit the singer-songwriter’s sixth studio album.

The follow-up to Under Rug Swept, So-Called Chaos captured a happier time in Morissette’s life. During recording she became engaged to actor Ryan Reynolds (though the two split up in 2007) so the songs are more optimistic and positive than some of her earlier work. Musically the album continued to infuse Eastern sounds into a pop/rock sound, building on the more experimental approach she took with 1998’s Supposed Former Infatuation Junkie. Opening with Eight Easy Steps, So-Called Chaos is easily one of Morissette’s more accessible records and it was set up for commercial success.

Throughout the record Morissette varies the sound and tempo. From the gentler therapeutic theme of Out is Through to Eastern-tinged title track, no two songs sound the same. Morissette’s distinctive voice drives the melodies and her wordy but insightful lyrics continue to be her trademark. Elsewhere on the record Not All Me finds Morissette refusing to take all of the blame for an argument, Knees of My Bees is a fun play on words about falling for someone, and This Grudge is a startlingly honest moment that sees the singer admitting that she needs to let go of long held anger and bitterness.

The album’s lead single, Everything, is the last track on the record. It’s actually quite odd to put a single as the last track but it works on this record. Everything is a moment of self-awareness where Morissette acknowledges her flaws and celebrates the love and transparency she’s found with someone. It’s a gorgeous song and one of her most under-rated singles without a doubt.

So-Called Chaos continues to follow the high-quality set by Music on Vinyl for previous Morissette reissues. The full-colour double-sided insert features the lyrics and artwork from the original release. The 180-gram pressing lends itself to magnificent sound and I continue to be impressed by how much difference you can hear compared to the original CD release. The music has more depth and warmth, and this mostly uptempo collection of songs has never sounded better.

While So-Called Chaos may not be considered one of Morissette’s more popular albums, it’s one of my favourites. It’s interesting to look back through the singer-songwriter’s catalogue as she was penned a ‘man hater’ following the juggernaut success of Jagged Little Pill. That couldn’t be further from the truth and So-Called Chaos captures an artist at a pivotal moment of evolution both personally and professionally. Music on Vinyl’s recent vinyl release is the definitive edition of So-Called Choas and 14 years on from its original release, it’s definitely worthwhile revisiting this under-rated gem.

Advertisement. Scroll to continue reading.
In this article:Alanis Morissette, Music on Vinyl