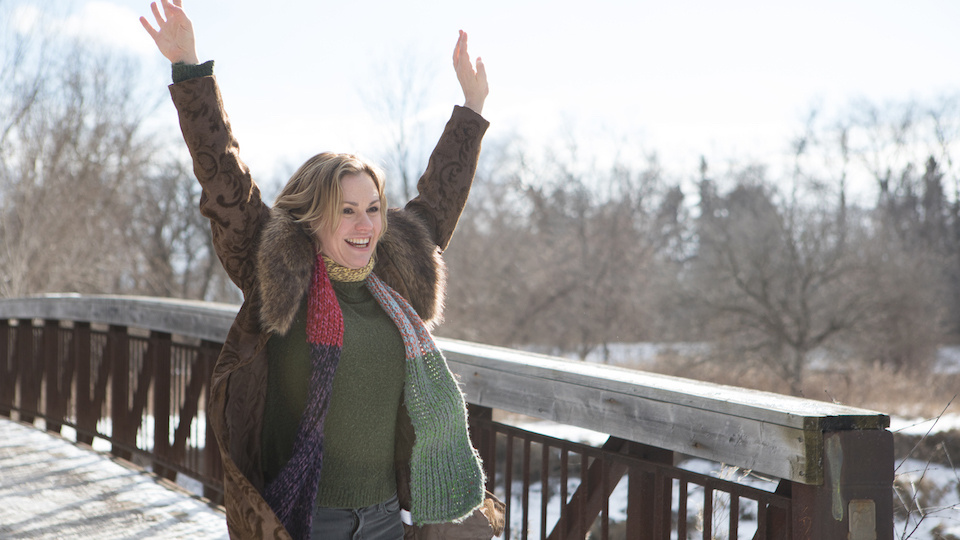 The stars of the TV show True Blood reunite in front of and behind the camera in Stephen Moyer’s The Parting Glass. His first film as director is a thoughtful and intimate portrayal of a grieving family, and accomplishes the not inconsiderable task of being both emotionally devastating and beautifully uplifting. With a great script, full of pathos and humour by first time screenwriter Denis O’Hare, and featuring terrific performances from a great cast of character actors, The Parting Glass has been one of the undoubted highlights of this year’s Edinburgh International Film Festival.

Colleen (Anna Paquin), the youngest member of her family has died in unclear circumstances. In the days immediately after her death, her husband Karl (Rhys Ifans), her father (Ed Asner on brilliantly growly form), and her three adult siblings Ally (Melissa Leo), Mare (Cynthia Nixon), and Dan (Denis O’Hare) reunite in the frozen landscapes of Missouri to mourn her and make arrangements for her funeral. And that’s about it. Adopting the style of a road movie, with occasional stops in diners and motels, we follow them over the course of one day as they try and come to terms with what has happened.

The early scenes are written and performed with razor sharp clarity. Through conversations in cars, and difficult attempts to order food in diners, O’Hare’s screenplay vividly captures each character individually, and how they operate as a unit. The relationships feel real and lived in. I believed they were a family. The overlapping dialogue, the sense of shared history, secrets and inside jokes and dark humour they use to mask the tragedy that has reunited them. Karl pointedly notes; “it’s hard to be an outsider in this family.”

The film delicately probes at the edges of things that might have happened or might have been said in the past. As they reminisce about Colleen, we flashback to recent moments where they last interacted with her. These fragments piece together her final days, and Moyer carefully builds a picture of an increasingly troubled person struggling with her mental health, whilst also revealing more about Karl, Ally, Mare, and Dan in the process than they may care to admit. Denial is a constant theme throughout the film.

The performances, as you’d expect from such an accomplished cast, are all superb. Denis O’Hare, working from his own script (which was inspired by experiences in his own life), is particularly affecting as Dan. Melissa Leo and Cynthia Nixon bring keenly observed nuance to his two older, more provincial sisters. But the standout is Rhys Ifans as the outsider brother-in-law. Working class, politically conservative, slow moving and slow talking, he is immediately set apart from the siblings. His recent estrangement from Colleen only adds to his isolation from the grieving family. It’s a terrifically realised portrayal.

It bears repeating that The Parting Glass is incredibly well written. O’Hare’s script understands the impossibly infuriating dynamics of family better than most films do. It perfectly depicts how we slip into those familiar roles from childhood no matter what age we are now, and recognises that no one can push your buttons with such piercing precision as well as family. The scene towards the end where they are all together in the motel room is nothing short of stunning.

Poignant, perceptive, and immaculately crafted. Moyer, O’Hare, and their cast have created something very special in The Parting Glass. With the right distribution and marketing, it could very well feature in next year’s award season.

John Parker
John is a freelance writer and film reviewer for Entertainment Focus.
Previous article
Arrow Video FrightFest 2018 reveals this year’s film line-up
Next article
Gladiator gets a thumbs up from the Royal Albert Hall faithful