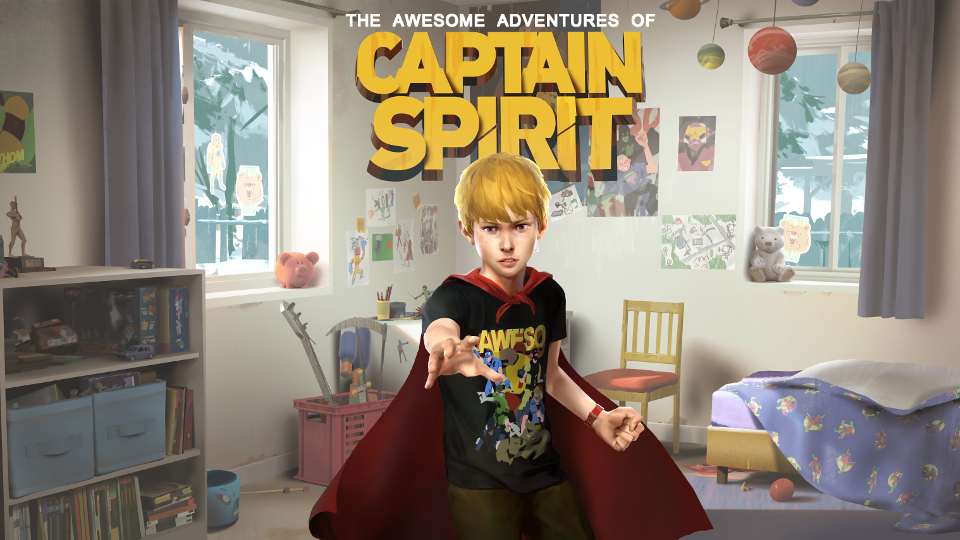 The Awesome Adventures of Captain Spirit was announced just two weeks ago at this year’s E3. It’s a self-contained narrative experience from Dontnod Entertainment that acts as an introduction to the upcoming Life is Strange 2. The game is available to download now, completely free to all players, on PC, PS4 and Xbox One.

Captain Spirit tells the story of a 10-year old boy named Chris. He’s recently moved to a new neighbourhood with his father. The pair are both struggling with the loss of Chris’s mother. In particular, the loss has hit his father hard, and he’s not coping, which is having a huge impact on Chris.

The game takes place on a wintry Saturday morning. It’s confined to a small area which includes Chris’s house and backyard. He can tell that his father isn’t coping and has found himself rather lonely. Chris copes with his situation by losing himself in his imagination.

Much of this revolves around Chris’s love of superheroes and villains. He’s invented himself his own superhero alter ego, Captain Spirit. As Captain Spirit, Chris pretends he has special powers and takes himself off on awesome adventures. These include battling his enemies and visiting distant planets. Dontnod have done an incredible job at capturing the wonder of childhood. At one point something extraordinary happens to Chris in a similar way to Max Caulfield in the original. I really don’t want to say too much more about the story so you can experience it for yourself.

Fans of the Life is Strange series will feel instantly at home with Captain Spirit. In the game, you play as Chris and must explore and interact with his surroundings. Like Life is Strange the environments are detailed and full of objects to examine. As in the other games the music and voice acting as excellent. The ‘moments of calm’ also return and they are still one of my favourite features.

I loved the way the game lets you explore at your own pace and it’s pretty much up to you what Chris gets up to. There’s a variety of things to do and you can decide which Chris tackles or ignores. Certain events only happen if you’re in the right place at the right time. Many choices in the game have consequences so it’s completely possible to miss things or change what can happen. This has been done on purpose by the developers who are expecting players to play the game multiple times to see everything.

View some screenshots from The Awesome Adventures of Captain Spirit in our gallery:

Careful and thorough players, especially those who played the other Life is Strange games, will probably find they uncover the main things in a playthrough or two. To guide you, Chris has a list of eight ‘awesome things to do’ but how to achieve each of them takes some thought. I really took my time with my first couple of hours playthrough and managed to check four of these off my list. A second shorter play I’d done six. Several plays later and I’ve yet to find out how to complete two of the tasks.

Dontnod have said that Captain Spirit contains links to Life is Strange 2 and certain actions and choices will carry over. Keen players will want to analyse absolutely everything for clues on the sequel. I’ve spotted a couple of things during my time with the game so far but, while itching to speak about them, I’ll not spoil them here.

The Awesome Adventures of Captain Spirit is an adventure worth taking. Releasing it for free is a genius move that will delight Life is Strange fans and act as a starting point for players new to the series. I’m sure there’s plenty of things I’ve yet to discover and it will be interesting to see what theories the community comes up with.

The Awesome Adventures of Captain Spirit was reviewed using a digital code supplied by the publisher.