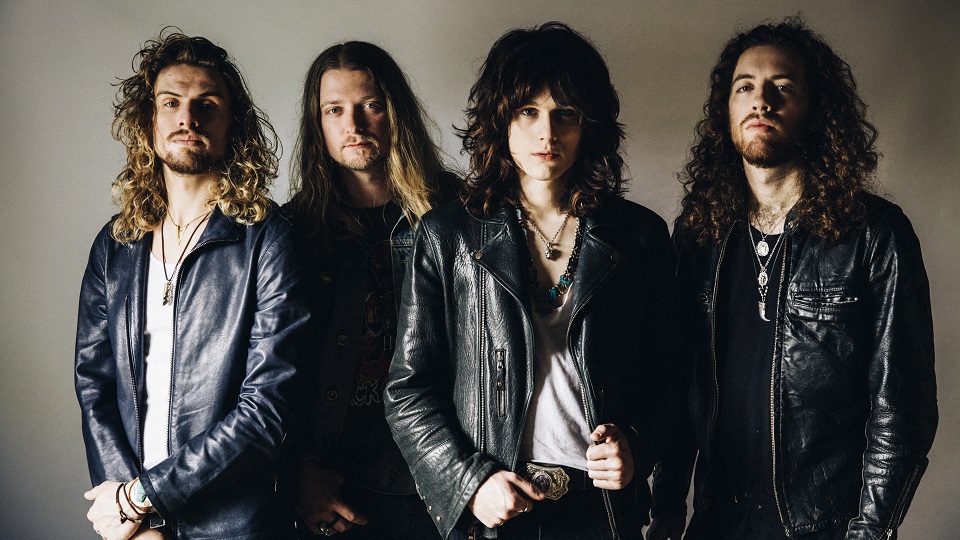 Along with bassist Noah Denney and Graham Whitford (son of Aerosmith’s Brad Whitford) on guitar, the band released their debut album Wild Child in 2013. They’ve since toured with rock and roll legends including AC/DC, Eric Clapton and Guns ‘N’ Roses, and released their self-titled second album in 2017.

I spoke to Tyler recently about the band’s UK tour, latest single Don’t Mind The Blood, his songwriting process and more.

Hi Tyler! How are you?

I’m doing wonderful. Just running round Nashville getting ready to head your way!

You’re touring in the US at the moment – how’s that going?

It’s been awesome. We’ve been out with a band called Blackberry Smoke, and as well as doing a lot of our headlining shows and festivals. It’s just been really good. We’ve had a lot of great shows.

What can people coming to see you on your UK tour expect?

Oh, they can just expect a full-on, high-energy Shakedown show. We pride ourselves on putting on a good rock show and that’s what we intend to do whenever we come over there. We’ve had some of the most memorable shows of our career in the UK, from our first time at Download Fest where we played an early slot and it was still so much fun. And then we played the side stage at Ramblin’ Man Fair last year and we’re excited to be on the main stage this year. We’re also getting back to London, Manchester, Birmingham, Leeds – all over the place. So we’re just excited to get back, because we’ve made a lot of good friends over there over the past handful of shows.

Do you find you get a different response from audiences in the UK compared to the US or other places you’ve played?

Yeah, I mean it’s a little different in America. I think we get a bit of a stronger reaction in the UK honestly than we do in our home country. And I don’t know why that is. I think everyone likes something a little exciting, I guess. It’s funny ‘cause I’ll watch British bands come to America and people flip out. ‘Oh my God they’re the best band!’ And I’ve talked to some guys and they’re like, ‘yeah man, America’s better for us than it is at home’ [laughs]. It’s just funny to me. But yeah, I don’t know, man. We always love the reaction that we get from the UK audiences.

I remember especially some of our very first shows in London. We did a couple nights opening for AC/DC and then the first show we did in London was at this place called Boston Meet and Greet which was a tiny little club, and it was packed. People were wearing Shakedown T-shirts when they came in and singing along, and it was a really rewarding feeling. It kind of showed me like, ‘oh, you guys belong here in this city playing rock and roll’. And then the next show we did was the Barfly which they turned away 50 or 60 people who couldn’t get in. So I’m just excited to go back. We’re playing Dingwalls and I think it’ll be great.

You’re playing several festivals this summer. Would you say festival crowds are different compared to other shows?

Yeah, I think you have to work harder for festival crowds, because one, you could be playing early in the afternoon before everyone’s got their party pants on, and two you’re competing with whatever else is going on at the festival. So I’ll always go into festivals with the mindset of people are walking to get to the stages that they want to be at, and we have to try and stop them on the way so they watch us. You’ve just got to put on a show that’s arresting enough to make someone go, ‘hey, let’s watch this band for a second’ and if you’re lucky they’ll stay for the whole set.

Your latest single is Don’t Mind The Blood – can you tell us more about that?

Yeah, so when that song was written there was obviously a lot of protesting going on in America during the election, and one thing that we saw a lot of was people standing up for what they believed in and getting beaten for it. And there’s something that’s very, very inspiring to see someone who believes in something enough to go, ‘alright, well I’m not afraid to just get beat up or to take a hit for this, because this is what I believe in’. To me it’s the same mentality of a kid who’s like, ‘yeah, I’m gonna take all my money and I’m gonna buy a van and I’m gonna buy a guitar and I’m gonna put together a group with my best friends and we’re gonna call ourselves this and then we’re gonna spend all our money going on tour because we believe in rock and roll’. Y’know, it’s the same thing. It’s just about taking a minute and standing up for what you believe in at any cost.

You released your second album last year. Were there any songs that were particularly easy or particularly difficult to write on this record?

Backfire was really easy. That song wrote itself in like 15 minutes. Difficult… I wouldn’t say it was difficult to write, but the song Jealous Me was a bit difficult to figure out how to make it sound like The Shakedown whenever we recorded it. Because originally when that song was written it wasn’t intended for The Shakedown, but I loved the song so much that I wanted it to be a Shakedown song. So it was a matter of replacing a lot of electronic instruments with guitars and stuff, because it was written just as an experiment and there was a lot more electronic stuff and just a different vibe than what we normally do. So it was fun to take that one and bend it until it snapped into place.

Is that experimental approach typical of how you write?I

’ve never really been great at going ‘ah, this is what I might do today’. That’s so not my style. I can do that if I have to, but the thing is most of the songs that end up on the record are the songs that you get an idea and you can’t think about anything but that. There are times when you go, ‘oh we have enough fast songs, we need to write something kind of like this’ and then we end up writing a fast song. But my whole thing is if you show up and there’s some inspiration there then follow it. We write so many songs and already have so many written for whatever our next project is.

Ohhh… I would say Take It With Me by Tom Waits. That last verse just wrecks me.

You’ve been out on headlining tours and opened for some legendary rock acts. What have you learned from being on the road?

Oh, man. I think one of the things that Angus Young told me, when we were out with AC/DC. He said, “If you believe that you’re gonna take the crowd on a journey and make them believe it, then they’ll go with you”. And I think that that was always a very memorable piece of advice, like ‘oh well OK, I have to be confident and believe in myself and then they’ll all get down with it and we’ll all have a good time together’. And that’s why when you asked me what to expect from a Shakedown show, it’s a high-energy rock and roll show. And that’s honestly what I believe. We’ve got a super-cool grassroots fan base of people who come to the shows trusting that that’s what they’re gonna get [laughs]. So we kind of approach any show, whether it be a club show or a stadium show or a festival crowd, just going ‘alright man, let’s go for the throat. We gotta get ‘em, let’s go get ‘em’. And so it’s just fun to always have this mentallity of ‘alright, well, what’s our best show gonna be? The last one that we played’. That’s what we have to do.

There was a handful of things. Early on it was Elvis in first grade. Seeing the video of Elvis, I was immediately obsessed. And so I dyed my hair black, got a guitar. The guitar only had three strings but it was enough for me to be interested. I started imitating Elvis, writing Elvis on all my school papers instead of Tyler. And when I was 11 years old I met a man named Roosevelt Twitty who was playing the blues in a music shop, and that was the first time I’d ever heard the blues. I’d heard the blues indirectly through Elvis and then all the early rock and roll that had been influenced by Big Mamma Thornton and Sunhouse and some of those blues artists. Whenever I started learning about the blues it was a huge influence. One thing snowballed into another and I just became obsessed with music.

What does the rest of the year look like for you and the band?

Yeah, we’re gonna be touring for the next month and a half in Europe, then we come home and we’ve got a little time off where we can hopefully get in the studio and hopefully record a couple of the songs that we’ve been working on. And then we’re going out with Clutch and Sevendust all around America, so that’ll be very fun.

See Tyler Bryant and The Shakedown on tour in the UK:

In this article:Tyler Bryant & The Shakedown