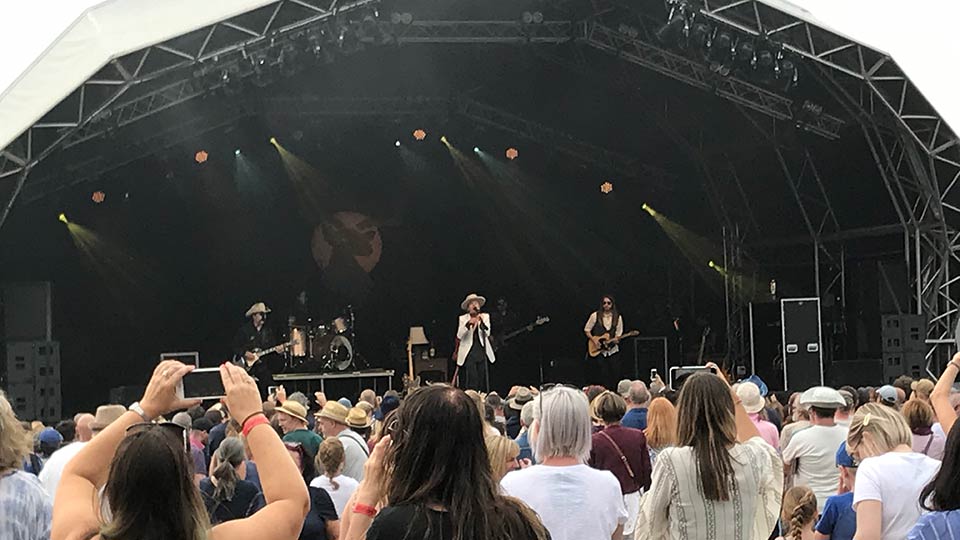 The sun was out in force for the second day of Black Deer Festival as a larger crowd descended upon the stunning surroundings of Eridge Park.

Saturday saw the festival properly kick into action after a quiet start on Friday. The live music begun shortly after midday and the Main Stage officially opened with Search For an Artist winner The Paul Dunton Orchestra. At the same time The Adelaides took to the The Ridge stage, Laura Oakes on the Supajam Stage and Lieutenant Leek at Haley’s Bar. We took the opportunity to make our way to The Roadhouse to see Sonia Leigh’s third show of the weekend, which was an acoustic one. She got the crowd ready for the day with her energetic performance that included highlights Bar, Jack is Back and the cheeky Booty Call.

Rather than stick to one stage, we spent the day working our way round them all so we could soak up as much talent as possible. We sat by the live fire and enjoyed Jarrod Dickenson’s performance on The Ridge Stage. Vocally he sounded fantastic and he was backed by a tight band that included his wife Claire on backing vocals. From the swampy Faint of Heart to the hazy summer groove of Take It From Me, Dickenson delivered an authentic Americana set that was one of the first highlights of the day.

We spent a fair amount of time at the Main Stage, sitting on grass under the sun while the music kept on coming. Darren Eedens and The Slim Pickin’s satisfied the traditional Country fans in the audience with a bluegrass set that featured some mean banjo playing and introduced their music to a wider audience. On the Line (The Laundry Song) was the most memorable moment and they set things up for Ashley Campbell, who followed, very nicely. Campbell is fast becoming a favourite on the live circuit following her Nashville Meets London and C2C: Country to Country appearances. With a sweet voice and her incredible banjo prowess, Campbell took the audience through selections from her debut album The Lonely One and threw in some covers too. After opening her set with Better Boyfriend, Campbell wowed on Carl & Ashley’s Breakdown and with her emotive song about her father Glen Campbell, Remembering. After saying her goodbyes to the audience, Campbell realised she still had a little time left so she returned to the stage for a stunning version of Dolly Parton’s Jolene.

As we grabbed an ice cream, John Moreland arrived on the Main Stage for an acoustic set that captivated the audience. To many he was a new face for them to meet but by the end of his set he clearly had won over plenty of new fans. His brand of emotive, autobiographical Country was a change of pace for the day but songs such as Cherokee, Nobody Gives a Damn About Songs Anymore, Oh Julia and American Flags in Black and White struck a chord.

One of the most-anticipated moments of the weekend came next as Hollywood star Kiefer Sutherland made his UK festival debut. The actor, best-known for his roles in 24 and Lost Boys, drew the biggest crowd of the weekend so far and he certainly came to rock. It was easy to tell that he was having the time of his life as he worked his way through new material and songs from his album Down in a Hole. For the most part the set was loaded with uptempo tracks that spanned Country and Rock and one of the highlights was a cover of Patti Loveless’ Blame It On Your Heart. Elsewhere in his set Sutherland performed the softer track Can’t Stay Away, a love song to a bar in Los Angeles, and newer single This Is How It’s Done, which was an ode to recalling a fight he witnessed during his first time in a bar as a teenager. Sutherland closed his set with Agave, a Latin-tinged number, that got the crowded on their feet and dancing. He also showed off his dance moves as he worked the stage like a seasoned pro.

Following a very tasty chicken burger from one of the many vendors at the festival, we took a seat at the Sound Lounge stage to watch British singer-songwriter Lisa Wright. We’ve been big supporters of Wright’s for a while now and she didn’t disappoint. With a pure voice that recalls early Dolly Parton, Wright worked her way through tracks from her new EP Mind of Mine as well as earlier releases including Why Would I Wanna, a song that calls out a cheating ex, and the gorgeous Back to You, which deals with being pulled away from loved ones while pursuing a career in music. The bold and honest Mind of Mine was a highlight as was the stirring Giving Up the Ghost. Wright included a cover of Cyndi Lauper’s Time After Time and closed her set with current single Tennessee.

Back at the Main Stage, Iron and Wine closed out the day with his distinctive Americana and alt-folk sound. Following on from Sutherland and Ward Thomas, Iron and Wine’s set was more stripped-down and atmospheric with lots of fans taking a seat on the grass and relaxing during the set. Taking the festival slightly out of the family friendly setting with a fair amount of swearing, at one point he said he was going to ‘fuck up the crowd’ with his set, Iron and Wine treated fans to songs from his catalogue including The Trapeze Swinger, Last Night and Wolves (Song of the Shepherd’s Dog). Despite the more laidback feel of the set, he held the audience’s attention after a long day and he provided a much-needed moment of relaxation with his calming music.

With that we bid adieu to Black Deer Festival for the second day and we are already looking forward to seeing what the third and final day has to offer. As we left the festival, the crowds were still in the mood to party and everyone seemed to be in good spirits. We were still trying to compute that fact that we’d seen Kiefer Sutherland!