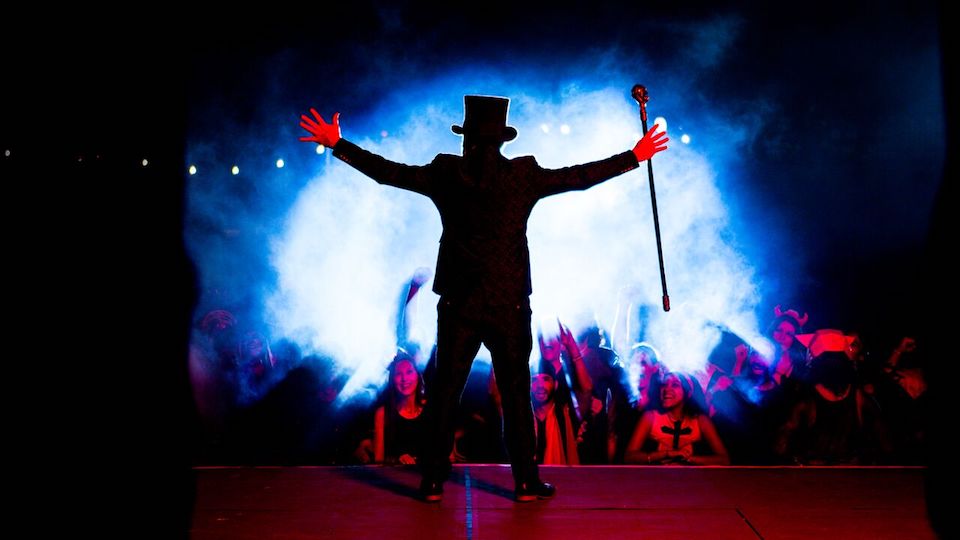 When you call your film Blood Fest, you’re kind of making a promise to the audience, and goddammit you had better deliver. And to be honest, Owen Egerton’s sophomore feature does indeed deliver on the festival of blood, unfortunately the rest of the film can’t quite live up to it.

Are you familiar with Halloween Horror Nights at Universal Studios? If not, Google it. The premise of Blood Fest is essentially Halloween Horror Nights, but for real. Blood Fest is the creation of Anthony Walsh, a famous horror film producer (played by Egerton himself) who has built a massive theme park where the most famous tropes of horror come to life, and fans can come and have the shit scared out of them. So you get scary clowns, zombies, creepy dolls, psycho killers, vampires, chainsaw wielding lunatics, dark basements, cabins in the woods, and all the rest.

The twist is, Walsh is a fucking lunatic, and is making his new movie and so all the horror is real. Which does lead to a pretty fun sequence of absolute orgiastic violence when the festival hosts go all Westworld on the unsuspecting festival-goers.

The plot is very simple. Dax (Robbie Kay) is a massive horror nerd. His love for the genre is forged in the slasher style opening sequence. Against the wishes of his father (Tate Donovan) he sneaks off to Blood Fest with his best friends Sam (Seychelle Gabriel) and Krill (Jacob Batalon). When it all gets a bit stabby, they have to somehow survive in all these different, but instantly recognisable horror environments.

Riffing on pretty much every horror film you can think of, across the various sub-genres, Blood Fest is meta to the nth degree. The survival of our heroes is dependant on their ability to understand all the sub-genres, and what the rules of those films are. Sound familiar? Could Blood Fest be the new Scream?

Well, in a word, no. It tries way too hard to be seen as clever, and all the knowing winks will grate with some audiences. It also lacks the sure hand of someone with the skill of Wes Craven behind the camera. But what immediately sets Blood Fest on the wrong foot, is that quite early in the film it rather bravely asks the question, “who wants to make horror scary again?” This raises two issues. The first being the suggestion that the current state of horror is not that great and not that scary. An assertion that I strongly refute. The second issue is Blood Fest is not scary in the slightest.

However, it is wildly entertaining, and for 90 minutes I had an absolute blast with this film. There is a fat dark vein of jet-black humour coursing through this film, and as a result there are a lot of genuine laughs. The three leads have good chemistry, and the nerdy banter is charming up to a point.

The majority of the references are broad enough for mainstream horror fans to keep up, however I suspect it is only really going to be hardcore genre fans (especially those plugged into the pop-culture scene around Austin, TX) who will ultimately get the most out of Blood Fest.