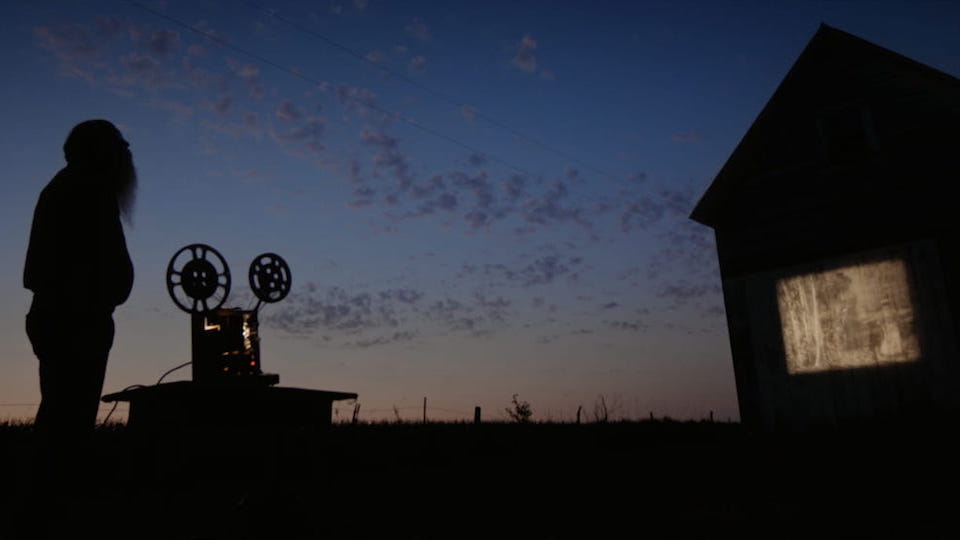 At an estate sale in 1981, local Iowa man Michael Zahs purchased a massive film and memorabilia collection on old nitrate stock. The collection had belonged to William Franklin Brinton, a turn of the century showman who toured the heartland of America in the 1890s showcasing films he had bought from the big companies at the time, such as Pathé, Lumiere, and Edison. Zahs had no idea that the collection was a treasure trove of film history.

Thirty-odd years later, we catch up with Zahs – an avuncular and wonderfully bearded old chap – in the snowy landscapes of Washington, Iowa, as he prepares to unveil the Brinton collection to the world. Brilliantly self-aware, he casually notes to the filmmakers that he realises how he will look to the world: like an obsessive hoarder. But the truth is he just likes to save things.

And that is why he was the perfect person to have discovered the Brinton collection. He has spent thirty years showing these films, and the incredible artefacts that came with them, but no one has been interested in them until now. Someone else might have sold them on, or tossed them away. But Michael preserved them, and persevered with making people aware of them. And discovered that within the 35,000 feet of film stock was an original film by Georges Méliés.

Directed by Tommy Haines and Andrew Sherburne, Saving Brinton is an incredibly charming and affectionate portrait of Zahs and his passion for film and history. The film is steeped in nostalgia for days gone by, but also asks pertinent questions about the past. What makes something worth saving? What makes a thing important or significant? And why is it important now? Who decides these things?

In between the scenes of Michael presenting the collection to disinterested journalists (“I thought he’d stay longer”) film archivists, and festival screenings, the filmmakers spend some time with Michael around his local community. This is a place where things haven’t changed all that much, where life moves at a slower pace, and things are simpler. It is this landscape that has shaped Michael, and has made him a man who wants to preserve the past.

With the discovery of the Méliés, Michael becomes something of a celebrity in the world of film restoration. But it doesn’t change him. Following a rousing applause at a screening, he says, “I didn’t make these films, I just have a good shed.” Saving Brinton is a delight of a film and Michael makes for a delightfully eccentric subject. Fans of early cinema will love this.