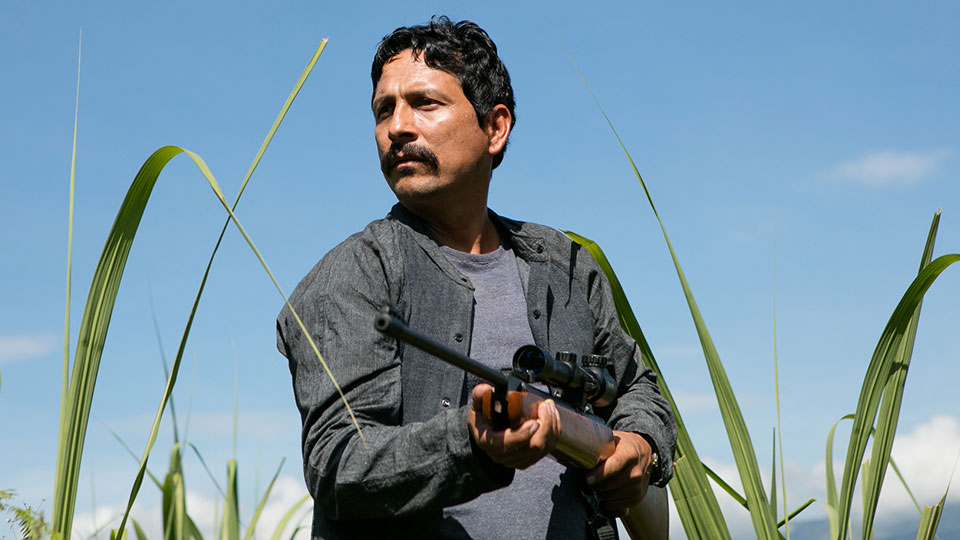 Truck driver and DJ Willington (Willington Gordillo) is madly in love with Mariana (Leidy Herrera) and he’s desperate to win her back. Engaged to René (René Diaz Calderón), Willington’s cousin, Mariana is determined to move on despite Willington’s attempts to woe her back. While trying to win her back, Willington is also dealing with paramilitary groups in the town with whom he’s locked in a cat-and-mouse game.

Guilty Men aka Pariente is the feature directorial debut from Iván Gaona, who also wrote the movie. The film was submitted for Oscar consideration but didn’t make it through to the ultimate shortlist. Gaona has put together a film that relies on hyper-realism to make its point and at times the narrative is clear as mud. One of the issues the film has is that a lot of it is lost in translation for those unfamiliar with Colombia. Guilty Men is often vague, leaving it up to the viewer to interpret what’s going on and that’s not a particularly easy thing to do for a lot of the movie.

In spite of those issues, there is plenty to enjoy about Guilty Men. Sure it’s gritty and bleak for the most part but there are some seriously tense scenes. The film’s opening moments depicts a group of men waiting for a rendezvous and while it’s not clear what’s going on, at least to begin with, it’s very gripping and compelling. There are scenes like this littered throughout the movie, especially once René and Willington go head-to-head as they fight over Mariana.

One of the ways Gaona keeps the film feeling realistic is that he used ‘natural actors’, in other words non-professional actors. Surprisingly that decision pays off and the performances do feel very natural and real. Willington Gordillo in particular gets under the skin of his character and delivers a riveting performance. He’s easily the film’s standout and he’s the character I found myself rooting for throughout.

Guilty Men is an interesting film but one that ultimately gets a bit lost in translation. It’s an ambitious and bold project from Gaona but for me it didn’t always get it right. The problem I found is that it tries too hard to mix in the violent paramilitary plot with the love triangle and that results in the story being confused. It doesn’t help that the subtleties of the Colombian community aren’t easily understandable by the viewer either and the less is more approach leaves you with many more questions than it does answers.