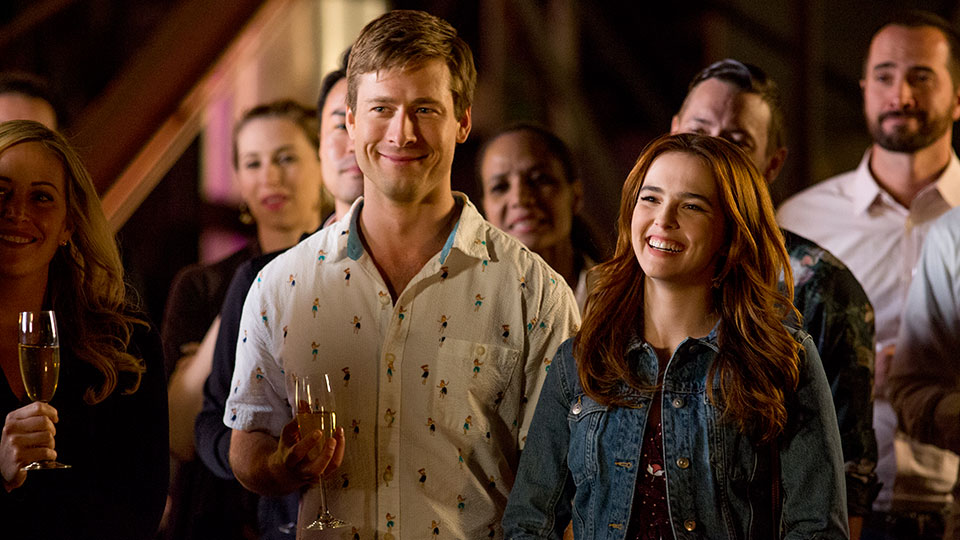 Executive corporate assistants Harper (Zoey Deutch) and Charlie (Glen Powell) are under pressure from their demanding bosses. Both expected to work long hours and be at the whim and call of their bosses, the two have a chance meeting in the lobby of their office building. Initially clashing with one another, Harper and Charlie decide to put a plan in action to play matchmaker with their bosses in the hope that gives them some respite from their constant demands. As their plan starts to take shape, Harper and Charlie grow closer but is there something brewing between them beyond achieving a mutual goal?

Set It Up is the latest Netflix Original movie that arrived on the streaming platform yesterday (15th June). The romantic comedy is helmed by Claire Scanlon (Unbreakable Kimmy Schmidt) and written by Katie Silberman (a co-producer on Sofia Vergara’s comedy movie Hot Pursuit), and it’s a light-hearted feel-good film that takes the spirit of the 90s rom-com and runs with it. While it may not be breaking new ground and the conclusion can be seen a mile off, Set It Up is fun ride that has plenty of heart and decent laughs throughout.

The film is a success in large part to the fantastic lead performances from Zoey Deutch (Flower) and Glen Powell (Hidden Figures) who recall the hey-day of Meg Ryan and Tom Hanks when they ruled the romantic comedy roost. Deutch in particular puts in a superb turn as Harper, a would-be writer who is so consumed with her job working for former ESPN presenter Kirsten (Lucy Liu), that she’s forgotten to get on with her own life in the process. She’s definitely inherited the comedy timing of her mother Lea Thompson and she’s flat-out adorable here. Her chemistry with Powell is superb and you quickly find yourself rooting for Harper and Charlie to get together, rather than their bosses. Powell on the other hand dials back the douche-bag role he played in Scream Queens to deliver a more rounded and charismatic performance as Charlie. He’s the perfect leading man for this kind of movie and he could easily forge a niche in this genre if he wanted to moving forward.

Lucy Liu and Taye Diggs, who play bosses Kirsten and Rick, have fun with their roles. Liu channels her Ally McBeal character Ling to put an acid-tongued edge on Kirsten while Diggs breaks out of his usual nice guy role to really let rip as the demanding and OTT Rick. Both actors are seasoned pros and they add a bit of gravitas to the proceeding here. Saturday Night Live’s Pete Davidson and Unbreakable Kimmy Schmidt’s Titus Burgess have small supporting roles and both of them manage to make an impression. Davidsion is Charlie’s room-mate Duncan, who is constantly hooking up with guys, and Burgess is hilarious as security guard Creepy Tim.

Set It Up may adhere to the strict rom-com formula and it’s unlikely to win any awards but that’s not really the point of it. Half way through the movie it reminded me of the good old days of 90s rom-coms when they weren’t trying to make a political or cultural point, and were made purely for entertainment. This is escapism at its finest and thanks to the stellar cast, the sharp writing and the strong direction, Set It Up is definitely worthy of your time. I’ll also be keeping an eye on Deutch and Powell as they more than prove they can carry a movie with this little gem.