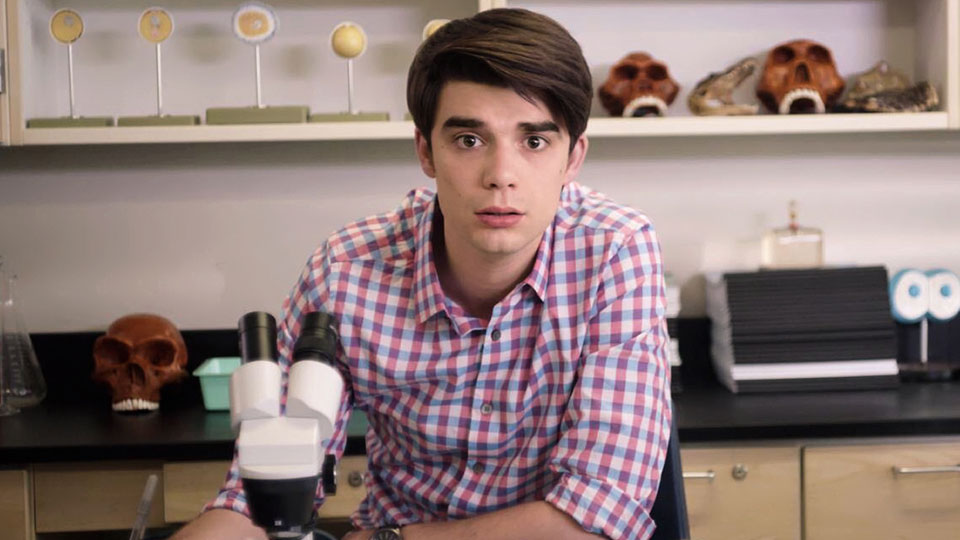 Teenager Alex Truelove (Daniel Doheny) befriends new classmate Claire (Madeline Weinstein) and the two quickly become close once they start filming a web series together. As Alex supports Claire during her mother’s battle with cancer, the two friends fall in love with one another and their relationship changes. Claire is eager to have sex but Alex keeps finding reasons not to sleep with her. During a party Alex meets Elliott (Antonio Marziale), a boy who is a little older and openly gay. Their meeting starts to stir feelings in Alex but he’s determined to ignore them and push forward with taking his relationship with Claire to the next stage. The only problem is, he can’t get Elliott off his mind.

Alex Strangelove is written and directed by Craig Johnson (The Skeleton Twins) and it premiered earlier this month on Netflix. Arriving shortly after Greg Berlanti’s Love, Simon, Alex Strangelove has been immediately, and unfairly, compared to that film. It’s true both are coming-of-age stories and both have a gay character as the lead but that’s pretty much where the comparisons end. I went into Alex Strangelove expecting it to be another tale of a tortured, closeted gay kid and I was pleasantly surprised by what I found as it packed in plenty of humour and lighter moments.

Thanks to Daniel Doheny’s sensitive and compelling central performance, the character of Alex is so much more than just a gay kid coming to terms with his sexuality. Alex exists in a modern-day school environment where kids are able to express themselves more freely than they ever have before. That’s one of the significant differences between this film and other ‘coming out’ stories I’ve seen told on film. The battle for Alex is one within his own mind as he’s more worried about what people will think and say, even though no one around him really cares whether he’s gay or not.

The film realistically depicts a loving teenage relationship between Alex and Claire, and that’s really the heart of the film. The characters were best friends before they were lovers, and there’s no doubt that they love each other deeply – it’s just that Alex can’t love Claire in the way she wants or that he would like to. As the story progresses and Alex starts growing closer to Elliott, it was refreshing to see that Alex didn’t spiral into a dark place that dominated the rest of the film. When the two boys share an intimate moment, Alex freaks out and lashes out, but the way in which the fallout from that is handled is with great sensitivity that feels authentic and real.

Without giving too much away, the film’s resolution is a satisfying one that had this reviewer wiping a little tear away from his eye. In part it made me wish my coming out experience had been more like Alex’s in an environment where there was plenty of support from peers. I also felt by the time the credits rolled that I’d been on a journey with Alex and I had been rooting for him since the moment he and Elliott locked eyes on one another.

As well as Doheny’s fantastic performance, mention must be given to Madeline Weinstein who is nothing short of excellent. It would have been easy to make Claire a disposable character but the character was so well written that you cared about her, even when you were rooting for Alex. Weinstein brings every emotion to the table and she marks herself out as a young actress with an incredibly bright future. Antonio Marziale is magnetic as Elliott and he has magnificently expressive eyes. He can go from looking happy to sad with a simple eye movement and he fosters a believable chemistry with Doheny. My only complaint is that I wish he’d been in the movie more.

Alex Strangelove is a pretty important movie. I wish I’d had something like this, and Love, Simon, when I was a teenager coming to terms with my sexuality. It moves me to see that films like this are being made and marketed to a mainstream audience, as they should be. Young kids who are coming to terms with their sexuality or exploring it, finally have role models they can look up to and Alex Truelove will without a doubt be one of them. Alex Strangelove is a special film that deserves a wide audience and packs a very necessary message.