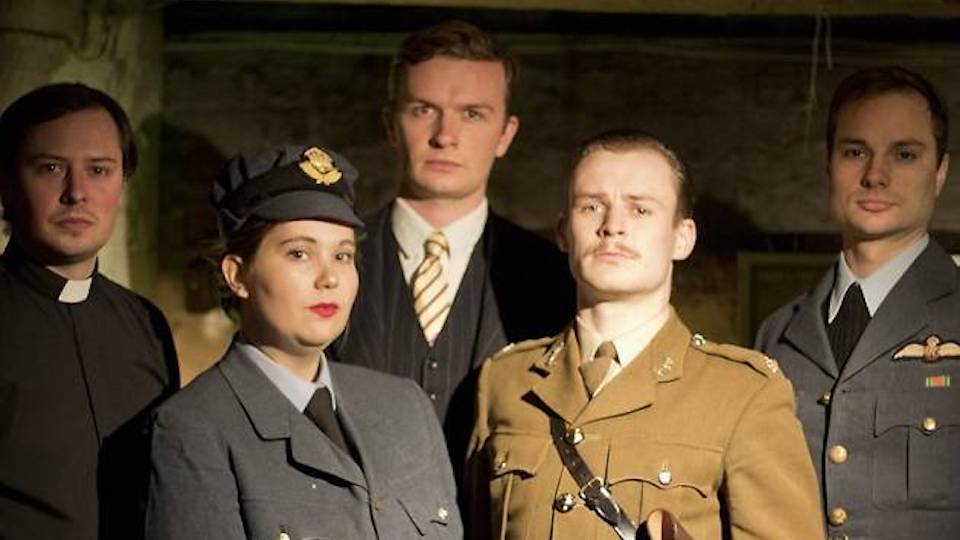 If, like me, you think escape rooms sound fun but a bit too much like hard work, then perhaps it’s time to try some total immersion theatre. Plenty of amusement with no cryptic puzzles to crack.

For King and Country is a hands-on audience offering from The Colab Factory, written and directed by Owen Kingston. Popular with audiences thus far, its run has been extended until the end of July so if you missed it first time around, it’s not too late.

It’s unsurprising it’s been a hit with crowds – whether you’re a history buff or simply a keen theatre-goer – this is a smartly presented scenario with a convincing set design (and where it isn’t – for example, they take contactless payment with ‘a device on loan from Bletchley Park’ – you’ll happily forgive them).

It’s December 1940 and a Nazi invasion force has landed on the south coast of England. Operation Sealion is in full swing. As the invasion force prepares to strike north and capture London, King Edward VIII refuses the resignation of British Prime Minister Lord Halifax, triggering a constitutional crisis.

Parliament is recalled, and with all the members of both houses meeting in Westminster, a small group of backbench MPs and their families – designated survivors – are taken to a secure location south of the river Thames.

Crikey, that’s right, the time to ‘Keep Calm and Carry On’ has fallen to us audience members – the MPs and their families.

On arrival a convivial ‘Cousin Betty’ ushers you through to the bar and offers a refreshing Pimms at 6 shillings (£ sterling), and you start to believe you’ve entered a 1940s time warp. The players greeted our ten-strong audience individually, in character, slowly but surely drawing us into the game. You’re invited to wear 1940s dress (optional but recommended) to really fool yourself into the alternative reality as the plot rages on.

The seven-strong cast all deserve applauding for bringing an individual flavour of wartime to proceedings, with a standout steadfast performance by Tom Black as Douglas Remington-Hobbes (Dougie for short). After handing over our ID papers, allocating our various constituencies, Dougie guides our somewhat confused, ramshackle parliamentary meetings every step of the way.

With Britain suddenly no longer the impenetrable isle we’d imagined ourselves protected within, the pressure increases as the fate of the nation rests on our shoulders.

Delivered a spate of bad news, we are immediately tasked with appointing a new Prime Minister, Head of Propaganda (a role handed to yours truly so don’t believe a word I write), Home Secretary and so on. The typewriter keys are bashed with gusto, secret telephone lines burst into life without warning and hurried speeches to the nation must be compiled at a moment’s notice. The panic becomes palpable – with plenty of tension-breaking laughs along the way – as the bunker becomes a flurry of activity.

If you aren’t keen on audience participation, don’t worry, there’s no forced contribution other than raising your hand to vote on a number of critical decisions – some of which leave you examining your morals – as the two hours quickly unfold. With up to thirty audience capacity, it’d be easy to sit back and watch others make the effort to drive the story along. However, the more you put in, the more you get out and as Jerry pushes ever closer to London, evacuation no longer an option, you’ll feel there’s no time to be shy. It’s time for action.

It’s fast paced and, as such, some communication is lost as we are torn between key areas of activity in the bunker. However, the chaotic nature of the interactions adds to the realism.

As Hitler tightens his grasp around dear Blighty, the walls start to feel as if they’re closing in as we build to an exciting and unpredictable crescendo. God Save The King – and the rest of us poor devils!

In this article:CoLab Factory, For King and Country, Owen Kingston, Parabolic Theatre