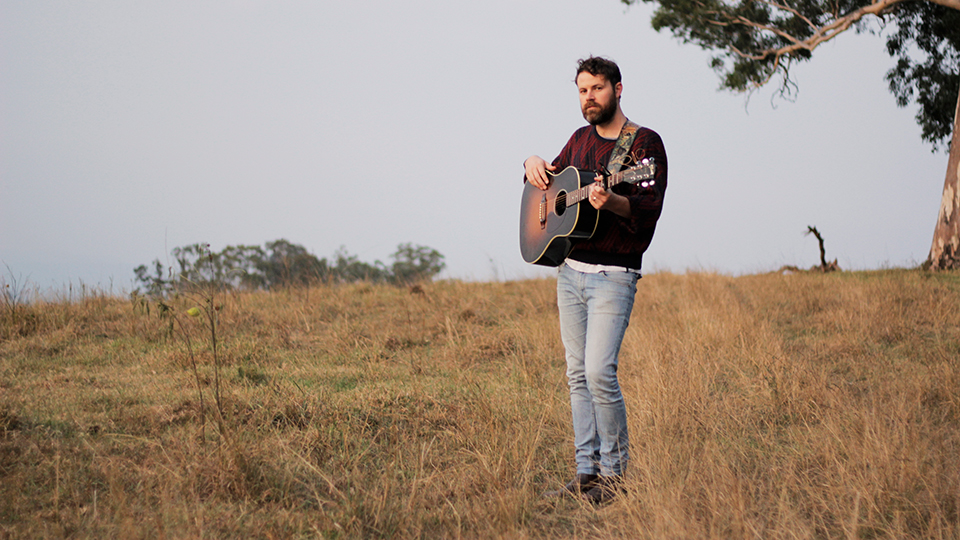 After years of supporting each other’s work, they teamed up to produce Hospital Hill (out now), a 10-song collection, that includes a string quartet featuring members of the Australian Chamber Orchestra.

The pair have been good buddies ever since they first met in a university lift in 2009, with Gardiner holding bass and cello credits on three of Carty’s four studio albums.

Carty is currently on a UK tour, co-headlining with Maz O’Connor. I caught up with him to discuss the project, and his excitement about bringing his music back to UK audiences.

What made you want to create this album? Was it built on conversations you’d been having with Gus, or a certain sound you wanted to create?

We’ve been talking about making this record for a long time. It’ll be my fifth full-length album, and Gus’ third (he released two albums with his previous band, Papa vs. Pretty). From the start, it felt like something different and interesting that we could really sink our teeth into. From my perspective, I think there is a pretty narrow selection of music that people generally think of when they hear the term “singer-songwriter” and I’ve always been interested in not repeating myself too much, and not fitting too neatly into that box – for my own sanity as much as anything else.

I know you’ve worked with Gus a lot in the past, but is this the first full release project you’ve completed as a duo?

Yes, Gus and I have played together for years both live and in the studio, but until now, it’s always been Gus lending his musicality to my songs and releases. We wrote, recorded, produced and are releasing and touring Hospital Hill together. That is a first and it’s very exciting.

How did you approach the songwriting? Do you write separately, and then come together to complete songs, or sit down in a room and start from scratch?

I’d always have a sketch of the songs before bringing them to Gus – an idea, a chorus, a line, or sometimes even an entire rough outline. Then we’d come together, Gus would write a string arrangement and we’d fine-tune and tweak structures and melodies and harmonic progressions, and one side of it would inform the other until we had something we were both completely happy with. It was really collaborative.

What do you think it is that makes your partnership with Gus so successful? Do you both ‘think’ the same when producing music, or is it your differences that make it work so well?

I think we come at things from slightly different angles…I’ve always been really into lyrics and narrative and I think Gus thinks a lot more in terms of textures. That back-and-forth really seems to enrich the music. We’ve been friends for years now – Gus was best man at my wedding – and we’ve done a lot of recording and touring together in all sorts of contexts. So, I think there is a real trust there that allows for real creative freedom.

How was the production process – was an outside perspective important given it was your own work, or do you find it easy to separate yourself from being the artist and producing?

Most of the production decisions were made in our heads before we even got to the studio. We had a really clear vision from the start. We wanted it to sound like a group of people in a room playing live. Gus and I went into the studio with a bunch of really good string players, and that’s what we did, we recorded it all live in complete takes with no overdubs. We had some help with mic arrays and set-up from legendary Australian producer, Paul McKercher, and that was invaluable in helping us to capture the whole thing vibrantly, the way we wanted. But other than that, it was the two of us steering the ship. I think it worked because we knew exactly what we were aiming at from the very beginning.

Tell me about the recording process? What was it like working with members of the Australian Chamber Orchestra? Did you arrange strings for them, or leave them to add their own interpretation?

We worked with a string quartet made up of beautiful players from around Sydney, some of whom play with The Australian Chamber Orchestra and some of whom play with other incredible ensembles across Australia and the world. It was amazing to work with such talented players – it really felt like being in the room with elite athletes, or something. People who have trained their whole lives to be technically brilliant, as well as creative and expressive. Gus wrote all the string parts in full, but we did leave some room for interpretation within each performance, and that is something we took a lot of care with whilst actually in the room recording the album, and something every musician there played a part in.

What messages do you hope fans take from this body of work?

More than anything else, I hope it brings people joy. We’ve been dreaming this up for a long time and it’s so exciting to be realising it all now.

What are you most looking forward to about touring the UK again?

I’m buzzing to get out and play all these new songs live! We’ll be touring this album across the UK before we head anywhere else, and I can’t think of a better place to give it a proper send off. A few songs in particular like Antipodes and Low In The Highlands were written here whilst I was still living back home in Australia – so they (like me, now) have a home here. Gus will be here too, playing cello. It’s going to be a special tour.

What can fans expect from your shows with Maz O’Connor? Have you worked with her before?

I’m really excited I get to sing with Maz every night! She is a beautiful songwriter and artist, and really insightful. We’ve worked together a little bit in the past – Maz opened one of my Green Note residency shows back in January, and we recorded a little version of Gillian Welch’s Look At Miss Ohio together. I don’t want to give too much away, but there will be harmonies!

What’s next? Do you already have ideas for upcoming projects?

I write a lot of songs and I’m always cooking up something or another in the back of my head, but for the time being, it’s all about sending Hospital Hill out into the world and then touring it across the UK, Australia and Europe for the rest of this year. I can’t wait to get started!

Jack Carty and Gus Gardiner’s album Hospital Hill is out now. He tours the UK in June, co-headlining with Maz O’Connor, at the following dates: