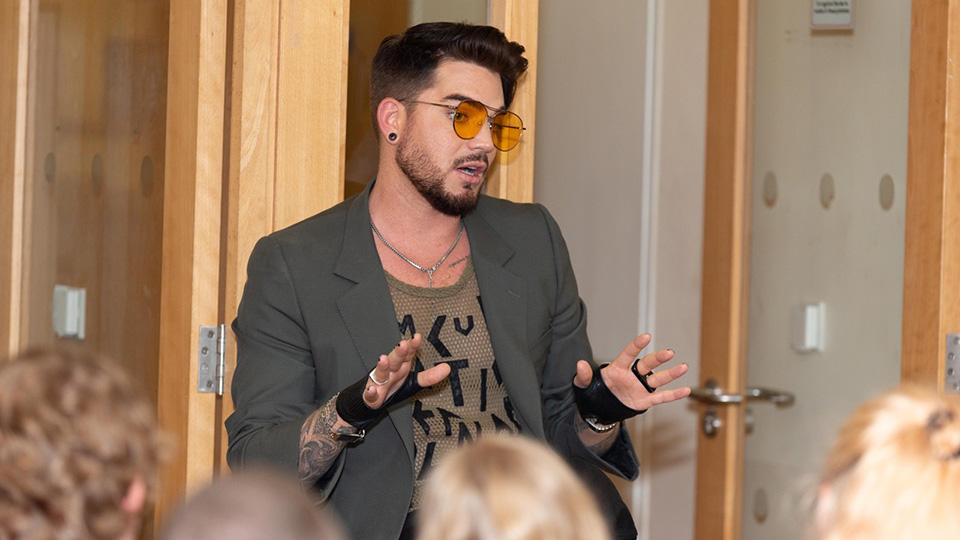 Last night Adam Lambert talked to members of London’s LGBTQ youth centre Mosaic about a range of topics including homophobia and his own personal journey.

The short talk and Q&A took place at the Mosaic Centre’s London base with attendees posing questions to the notoriously open star.

When asked how to broach ‘coming out’ Lambert shared, “I think the best way is to begin communicating, to talk about how it makes you feel. When you own how you are feeling to another person, it always seems to work better and connect deeper in that moment.”

He went on to share his own coming out experience, which happened after he appeared on American Idol. “After American Idol for a year it was all anyone wanted to talk about in the media. Part of me was like this is cool, this is important and I’m comfortable with my sexuality. But it also became weird because I was like I also sing, and I have a record that I’d love you to hear. It was tricky to balance it.”

During the event he talked candidly about the backlash he received early in his career for being an ‘out’ musician:

“There have been moments early on, where I felt I needed to prove something, and make a point that wasn’t necessarily a popular. By principle, I believed in it – but then you have to balance it out, it’s a business and I have to be palatable and commercial. I guess I had a struggle in finding the balance – but I don’t have any regrets.”

As one of the most high profile gay artists in the music industry, Lambert reflected on where we are in 2018 in terms of people in the public eye being open about their sexuality:

“Now we’re at a point where other artists are out, and the landscape has changed. Watching the queer movement over the past ten years has been awesome – we’ve come so far, you can see the conversation starting and things are really changing. Making it more than just gay or straight. There’s a light at the end of the tunnel and I’m very proud of that.”

“The development of social media and streaming is also why we’re seeing so many more successful queer artists now, because not all decisions are being made by the suits.”

Lambert acknowledged that while we’ve come a long way, there is still further to go. “There’s still a lot to be done, but I think it’s up to us to talk about it, get it out in the open, accept everybody no matter where you fall on the spectru

In July Lambert will performing in the UK with Queen on their latest jaunt and he’s been teasing the arrival of his own new solo music too. We’ve put together a round-up of everything we know about his new album so you can keep up-to-date on its progress.

Mosaic aims to support, educate and inspire LGBTQ youth. They provide weekly youth sessions so that those dealing with their sexuality can make friends, learn about LGBTQ identity and community, and engage in annual summer camps, cultural events and performing arts programmes.

To find out more about Mosaic and the work they do visit http://mosaicyouth.org.uk/.

In this article:Adam Lambert, Mosaic