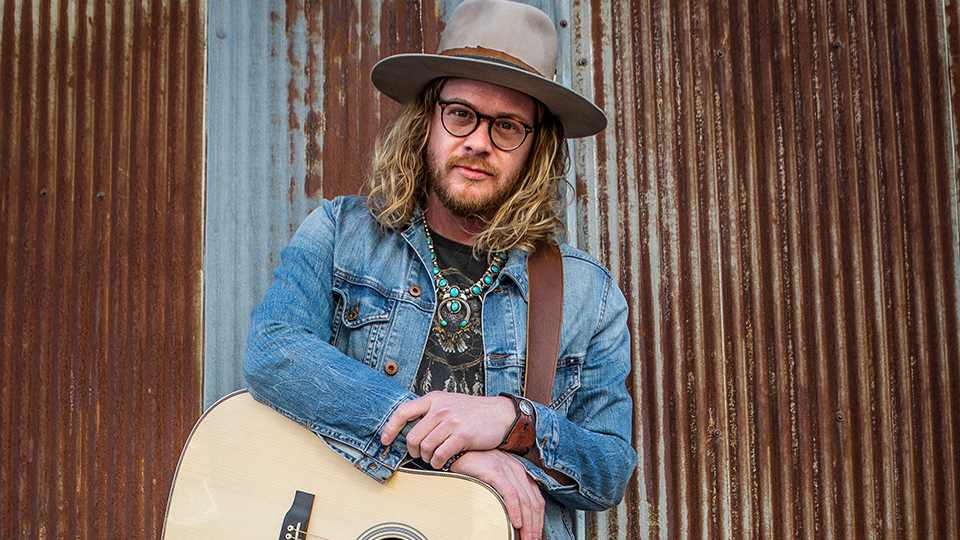 Following years of co-writing and supporting other artists, Kyle Daniel has decided the time’s right to step into the spotlight and share his own story.
The Kentucky-born singer-songwriter recently released his debut self-titled EP, which has already led to him being named as one of Rolling Stone’s “10 New Country Artists You Need To Know”.

He has shared the stage with artists, such as Anderson East, Jimmy Hall, Casey James, Clare Dunn and Jericho Woods, and earned the title of “Nashville’s Best Guitarist” at the 102.9 Buzz Rock Awards.

Today, Kyle shares with us his new music video for Hangover Town, and all the details you need to know about the new EP.

Congratulations on the new EP! What reaction have you had from fans, so far?

Thanks so much! The response we have received from this release is almost unbelievable. It seems as though something new surfaces every day, and it is a very exciting time to watch all of it unfold the way it has. I’m so very grateful for all of the love.

What did you set out to achieve, and did it come together as planned, or more organically?

I feel like this was the most organic project I’ve ever been involved in. When I came off the road touring to really concentrate on writing, I knew I had in the back of my mind that I would end up recording some of them, but my main goal was to write as many quality songs as possible. I really tried to hone in on my craft and make this attempt my strongest to date, from a songwriting perspective. Before I knew it, I had compiled a catalogue of more than 100 songs to choose from. When we started looking at songs for the record, the “sound” and vibe we were going for was very apparent right out of the gate. We went in and cut the entire record in a single day at Welcome To 1979. I think that really speaks to the concentration of what we were doing and all involved.

How would you describe your sound and style to new fans? And, will long-time fans notice anything new or different?

I feel like it’s a very southern-American sound. It’s a little bit country, a tad southern rock, a touch of Americana, a dash of soul, and all things in between. I have been all over the board with my musical endeavours, but I think long-time fans still hear ‘me’ in what I’m doing. I’m not sacrificing any musical integrity with this project, it’s just different. Once again, it’s more concentrated on the songs than anything.

Where did you source a lot of your inspiration from? What bands and artists were you listening to when you created it, and did any of that inspiration seep into the final product?

I find inspiration in living life. Day-to-day, I find a new reason to put pen to paper and try to express my feelings or views. I am really bad about not listening to music, however. During this process, I didn’t really listen to anything. We’re all stealing from each other somehow, but I find it really hard to find my own voice when I’m listening to music that I enjoy. I tend to feel engulfed in whatever I’m listening to and maybe subconsciously that comes out sometimes in my own art.

How did you approach the songwriting? Do you co-write or prefer to work alone?

Every song on this record was co-written. That being said, I really enjoy the ability to be emotionally intimate with another person in the creative process. It’s vulnerable. It’s raw. It’s the chance to uncover the layers of whoever you’re working with and really see how their mind works and how their heart feels. It’s been a real pleasure writing with every single person that I co-wrote this record with.

Was it difficult to narrow down only five songs for the EP?

Was it ever! That’s like trying to pick your favourite child in the family. It’s a really tough decision, but in the end, I felt very confident in the choices. When we chose “Hangover Town” to be the leading single, everything else kind of fell into place.

Were there any messages you hope fans take from this body of work?

I hope that people find inspiration, hope, understanding and empowerment in the songs from this record. I want them to know that it’s okay to feel the way they do, and they’re not alone. We’re in a really weird time right now, and I pray that I can be a positive light during this time.

You’ve shared the stage with artists like Anderson East. What have those experiences been like and what have you learnt from them in terms of performance and your craft?

Ole Anderson and I became the best of pals back in college at MTSU. I think we were both instantly drawn to each other because of our passion for music and soulful nature as people. He has always been a brilliant musician. Prior to his major debut release under Low Country Sound, I played lead guitar on every record of his. He is such a joy to be around, a wonderful friend, a caring soul and a true artist. I was so very proud when he got his big break and got to spread his music to the world. Now he’s setting everything in his path on fire, and I couldn’t be any more excited for him. I’ll never forget all of the memories we have shared on stage, in the studio and as friends.

What are your ultimate goals and plans in the near future? Who would you love to write with and perform with?

My goal is to get out and play as much as humanly possible. Obviously, the shows have to be the “right” kind of shows, but I want to spread this thing out across the world. I would love to write with Warren Haynes and perform a song with Gov’t Mule. What a band!

Will you be touring and can we look forward to you visiting the UK any time soon?

It’s a dream of mine, to tour in Europe, so let’s hope I can get over there sooner than later!