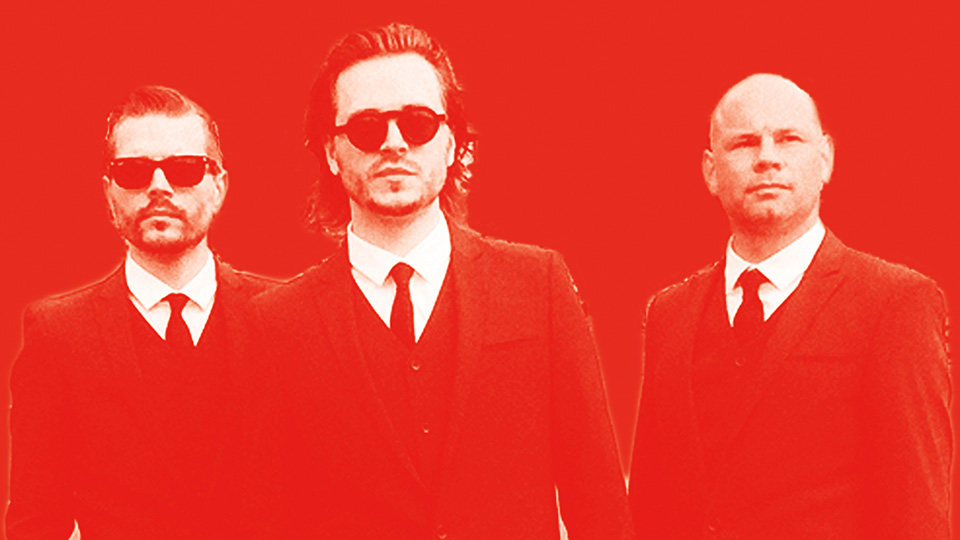 Fans of Country music drama Nashville will be very familiar with Jonathan Jackson, who plays Avery Barkley in the show.

As well as starring in the popular series, which comes to an end this summer, Jackson is also the frontman of three-piece alt-rock band Enation, which also features his brother Richard Lee Jackson on drums and Jonathan ‘Moon’ Thatcher on bass. The band is in the midst of their first UK tour playing a handful of headline shows and opening for Echo & The Bunnymen.

I caught up with the guys in London recently ahead of their first headline show at Omeara to talk about their time in the UK so far, their creative process as a band and the plans for new music.

This is your first time playing as a band here in the UK. How are you feeling about these shows?

Jonathan: It’s exciting. We’ve been talking about bringing Enation over for years so we’re really glad to be here. We’re just excited to play some new music. It’s cool. I mean Moon is from here so he’s used to it here.

Moon: Yeah! We’ve all nearly gotten run over by bikes! Where did they come from?

What can people expect from these shows?

Jonathan: It’s always hard to say what people can expect with music. We’re a three piece alternative band. We’ve focused more and more, especially over the last however many years, just trying to be us. It’s hard to say it sounds like this or looks like this, I don’t really know. It’s a three piece rock band out on a limb a little bit giving it everything we’ve got.

Enation formed in 2004. How did it all start for you guys?

Jonathan: Richard and I being brothers, we’ve been playing together since we were kids. We first started performing in Los Angeles on the Sunset Strip at Whiskey a Go Go, the Roxy and that kind of stuff. I was probably 14 years old, Richard was 16 or 17 and it just started from there really. As a band we started making indie records, the first one came out in 2004. It was just us wanting to play music and be in a band.

Richard: Moon was in another band that we really liked called Delirious. We got to know each other through that, stayed in touch and became good friends. We got to start playing with him in the last couple of years. .

Jonathan, what’s it been like for you trying to balance being part of a band with filming Nashville?

With filming on Nashville over now and the show coming to an end, this gives Enation a real chance to make a go of things overseas…

Is the plan to take Enation and your music across the world now?

Jonathan: Yeah, I mean that’s the exciting thing about Nashville ending, it’s opening things up for the band. We’re already talking about coming back in the fall and expanding to different places in Europe. We get to play with Echo & the Bunnymen this month, which we’re really excited about. We’re going to see what happens.

Your latest album is Anthems for the Apocalypse, which came out in the US last year and is available on iTunes over here in the UK. Was there a concept behind the record when you went in to record it?

Jonathan: We were focused on it being a three piece alt-rock record. Shock to the System, in particular, was a song that we felt was tapping into a little bit more of the early 80s new waves stuff that we like a lot. That in some sense is directing on the next record because Anthems (for the Apocalypse) was released in the States already and we’ve already been recording another record. Hopefully it’ll be coming out pretty soon. Lyrically, we realised that in retrospect that there were some themes there seems. I’m sure there’s humour in but I haven’t found it yet.

What is your creative process as band? How do you bring three individual visions together without compromising what you want to achieve?

Jonathan: It’s an interesting process for us. All three of us have been playing music for a long time. When the three of us finally came together and started playing it was a real instant chemistry and flow to it. Usually the process is that I’ll come in with the bones of a song of some kind and then we just build it up, orchestrate it and figure it out and see what it is. Moon brings some very unique things, not only his approach to music is very unique, but we’ve also had to find ways as a three piece to create cinematic moments as well. He’s been incorporating that with some bass synth stuff as well with his guitar, which has been really cool. For me it’s the rhythm section that makes the band otherwise it would just be a guy playing guitar and singing. .

Moon: I think there is an ease to the process. I’ve only been with the band for just over a year and it’s all happened quite naturally and organically, even recording the last however many songs. Being in Nashville there’s lots of places to record and people to record with, and it hasn’t felt like hard work, to me anyway. It’s just been, ‘let’s go in and play some music’ and then a month later we came out with the record. It was kind of accidental.

What kind of reaction and feedback have you been getting from British fans via social media ahead of your arrival here?

Jonathan: It’s been amazing. One of the things that we love is that the music fans from here, it feels like they’re open to good music regardless of genre. That’s something that we felt really strongly about. The response has been amazing and that’s certainly one of the reasons why we’ve been excited to really focus on the UK and come over here. We fell like there’s a real openness to what we’re doing.

Richard, is it challenging to work alongside your brother?

Richard: Not really (laughs). Jonathan and I have been doing creative projects together for a long, long time. It’s actually one of the ways we became good friends in our early teenage years starting to work on music and film projects. That creative project somehow brought us together. I always know he’s my brother but sometimes I just think of him as a friend.

Jonathan: We fought really bad when we were young and the music kind of helped. I think giving us something that we were both focusing on as opposed to clashing on, was really helpful. It’s kind of all there in the music in the sense. If I’m playing the song on guitar or piano, it doesn’t really come alive until the rhythm is there and so there’s a dependency artistically that is just natural. We’ve been playing together for so long, there’s all sorts of intricacies that are happening and you don’t even realise.

Richard: The three of us all have a similar perspective about the song, which is we want what’s best for the music. We try and set aside our own egos or whatever and just say what’s best for the song. When we have that environment with everyone then hopefully the best idea wins rather than your idea.

It sounds like you’re very collaborative in your approach to the band. Do you naturally fall into individual roles?

Jonathan: It’s all organic and seamless. I don’t think any of us would look at it like it’s black and white, sometimes it overlaps. We function within a real ease. Richard does a ton on the organisational side of things and the social media, keeping all that stuff going. Richard and Moon both work on designing stuff for websites and artwork for albums, working with concepts and themes. .

Richard: I think it’s nicely complimentary when the three of us interact. We all like to be in on the conversation on whatever is going on, whether it’s business or creative or whatever, we all like to know what’s happening and have input but we also can play to each other’s strengths. .

What else do you have planned for the rest of the year?

Jonathan: It’s in the works but there’s nothing official. We’re hoping to come back in the fall and we’ve finished our next record as well.

Richard: The only things that we’ve so far been talking about specifically is some kind of UK or European leg of the tour in the fall. Then hopefully being able to put out the record we just made next year and promote that. We don’t know what that looks like yet but its kind of the game plan.

Enation’s album Anthems for the Apocalypse is out now. The band will be playing a headline show at Norwich Arts Centre on Thursday 31st May (you can get tickets at http://norwichartscentre.co.uk/events/enation/) and they continue to support Echo and the Bunnymen throughout the week.