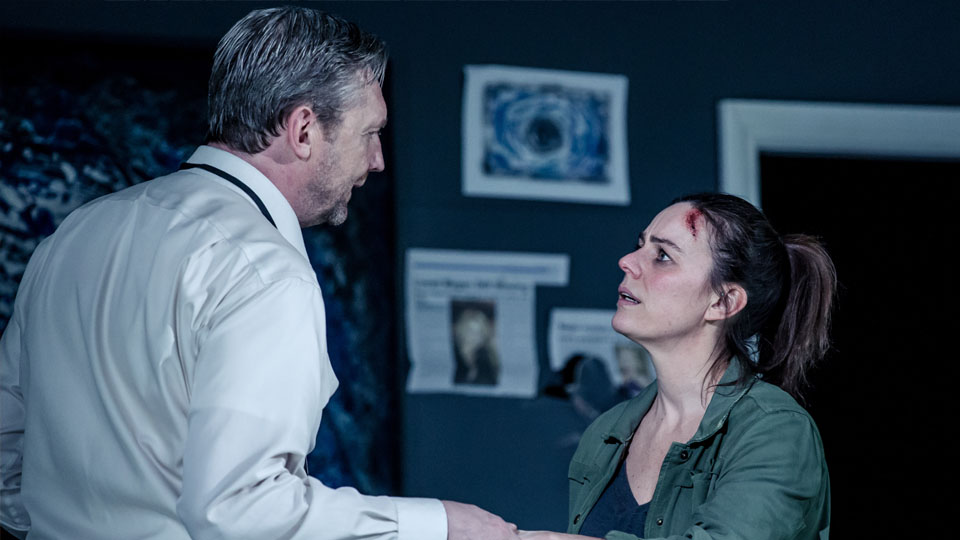 The Girl on the Train at West Yorkshire Playhouse

The Girl on the Train pulls into West Yorkshire Playhouse this month in a new adaptation based on Paula Hawkins’ best-selling novel.

Rachel Watson is fighting off a crushing alcohol addiction. During a regular train commute, she observes a dream couple living the perfect life. A passing interest soon becomes an obsession when the girl, Megan, goes missing and her partner, Scott, starts to act strangely. Convinced the girl has come to harm, Rachel can’t resist investigating Megan’s disappearance for herself…

Despite the play’s title, much of The Girl on the Train’s action takes place in a rather bland apartment as opposed to a racing train; focusing on Rachel’s attempts to backtrack through the blank spots in her memory from the night when Megan went missing. Was she there? Who was she with? Was she involved?

A subplot concerning her breakup to husband Tom – and his freshly-born baby to a new girlfriend – becomes tangled up in misremembered memories where we begin to question whether Rachel herself is reliable, innocent, or even sane.

Whilst the show could be considered a straight-up whodunnit in the Agatha Christie tradition, the strength of its storytelling resides in the often overwhelming theme of family and companionship. Rachel has an almost maternal concern for Megan, which becomes more striking when we learn that Rachel can’t conceive and is battling her own loneliness through alcohol. As Megan becomes an equal obsession to the child Rachel never had, The Girl on the Train becomes more of an introspective tragedy – a lament for lives that don’t exist in Rachel’s world.

Joe Murphy’s direction is naturalistic and cinematic in style, buttressed with striking production design from Lily Arnold. Performers often appear atop of the main set, providing an opportunity for scenes to be played out simultaneously whilst events are verbally recollected. This visually vivid accompaniment from an elevated position creates a dreamlike representation of Rachel’s mismatched memories and works particularly well.

Jill Halfpenny provides a tormented and determined performance as Rachel and is scarcely off stage throughout the production. Her character is skilfully drawn, with Halfpenny showcasing an extraordinary range from fragile to sassy; withdrawn to manic. Colin Tierney works wonders as a persistent detective, providing tones of complexity to some clunky dialogue which occasionally verges on pure exposition. Adam Best also delivers an intriguing depth to Tom, Rachel’s estranged partner.

Striking production design ensures that the visual scope of the story is viewed through a stylised frame like that of a train carriage window. Rachel’s interior struggles with her memories are branded on-set by a piercing black pupil within a contemporary painting – an ever-present psychological motif which purposefully bores into the audience within its zen-like Scandinavian dressings.

Whilst the show rides high on psychological intrigue and powerful themes, it feels bereft of some much-needed humour or warmth. Few characters demonstrate any redeeming traits and the story feels overwhelmingly joyless, save for a glimmer of optimism as it nears the end of the line. There are some attempts at levity, particularly in Sarah Ovens’ brilliantly snotty portrayal as Tom’s new partner, but these are fleetingly embedded and don’t quite counter an overly depressive tone. As such, many scenes have a distinctly mean-spirited feel which grows in a cumulative effect.

The Girl on the Train is a beguiling production but in some ways feels a little cold-hearted. Like a Hitchcock classic without the charm or black comedy, the intrigue is there but it lacks the sparkle and smiles to help you through the bleakness of the journey. Offering some stunning visuals and superb performances, this uneven and somewhat unfriendly adaptation is nonetheless a very satisfying, engaging a well-produced drama which explores uncomfortable questions and troubling themes with a memorable visual style. A train worth catching.