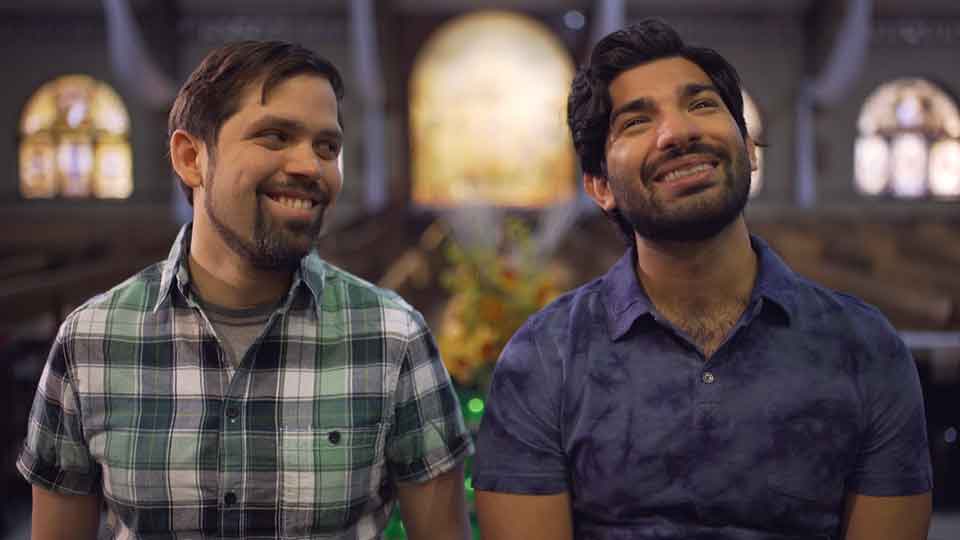 Diego (Andrew Saenz) has a chance encounter with Abel (Nelson Rodriguez) on the street and accidentally spills coffee down him. Feeling embarrassed Diego gives his number to Abel insisting he let him know if he incurs any costs to dry clean his clothes. The two run into one another again soon after in a bookshop and Abel decides to ask Diego out on a date. Falling for each other quickly, Diego and Abel get swept up in an unexpected romance but one of them is hiding a rather large secret from the other, which threatens their future together.

A Place to Be is from writer/director Tadeo Garcia and it’s his first film as director since 2004’s On the Downlow. Set against the backdrop of Donald Trump’s Presidential campaign, the film quickly establishes that Diego is an undocumented immigrant living in America illegally. That secret is one that he doesn’t choose to share with Abel for quite some time but it’s the crux of the film. When Diego and Abel start to date, it becomes clear that Diego feels uneasy about being in America. There are scenes where he experiences racism due to his heritage and it’s a little uncomfortable to watch.

The first half of A Place to Be is a romantic drama and the Trump backdrop seems a little ill-advised. Aside from a few hints at something darker, the film opts for a lighter tone but that all changes once Diego’s secret is revealed to Abel. From that point the film takes a much darker and more unexpected turn. While that twist is welcome, tonally A Place to Be is very uneven and it’s not entirely sure what it wants to be. Is the film making a valid political point or is it trying to capitalise on the negativity surrounding the Trump administration?

Something that doesn’t help the film is that the performances of Rodriguez and Saenz are a bit rough and ready, especially in the first half an hour. Both actors ease into their roles as the film progresses but there is some very bad acting at the start. That having been said, I was surprised how emotionally invested in the film I felt by the time the credits rolled. It did win me over but it took a bit of effort to get me on board.

A Place to Be is an interesting movie but for me it didn’t dig enough into the issue of undocumented immigrants and the fear surrounding them in modern day America. It was a very surface level exploration of a very serious issue and the film’s second half aimed more to shock than to make any significant point. I did enjoy the film but it never really figured out what it wanted to be and that made it a very disjointed viewing experience. The film is not without merits but a more focused approach could have made it even better.