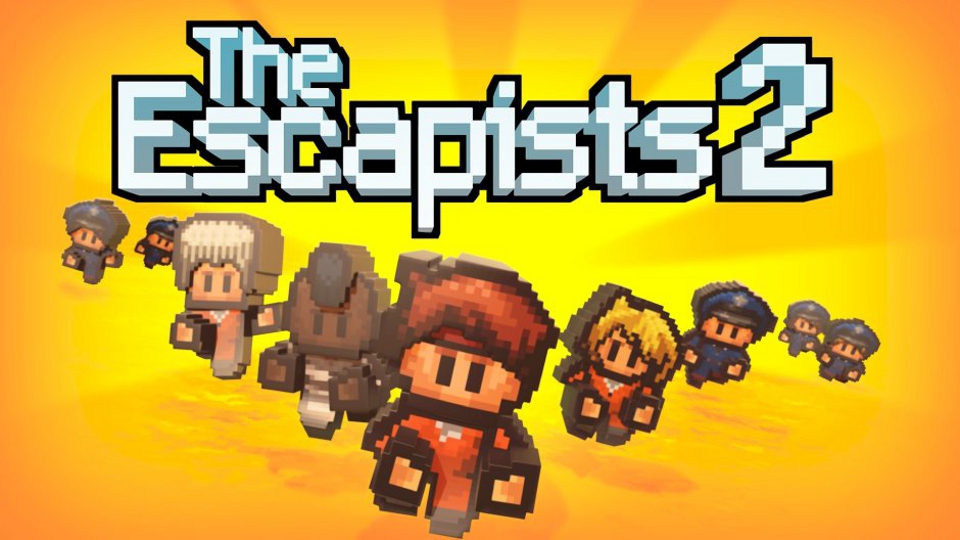 Mouldy Toof’s much anticipated sequel to 2015’s ‘The Escapists’ is now available on the PS4, Xbox One, Nintendo Switch and PC.

I can’t say that I ever played the original game thought I still look back with fondness on the many MANY prison related shows, movies and other games (if you can count a Prisoner of War camp as a prison) that I have become invested in during my life. Once I saw the box art of Escapists 2 I expected to find something akin to Theme Hospital only with more shanks and fear of the notorious showers. I wasn’t disappointed.

The tutorial is fairly straightforward and gives a flavour of what is to come. The game does not take such a linear style throughout and it is up to the player to work out the best way to escape; there are no helpful arrows and only rarely is there anything akin to a Zelda style ‘weakened rock’ graphic showing a possible point of escape. For the most part you spend time as Robinson, a repeat offender, going through the motions of prison life. Slowly you build up the characters knowledge through trips to the library during the free time and crafting weapons and tools for your own escape and luxury items for others. This can become tedious and one the one hand that is good, it’s like being in prison, but on the other hand, I’m not really in prison and I’d like it to move a bit quicker.

View The Escapists 2 launch trailer below:

The AI is intuitive, in the main, and the guards are on the lookout for any contraband and will notice when and if you miss any of the mandatory sessions. This time, they have dogs. The dogs. Dear God. I love dogs but these hell hounds still haunt my dreams, who’d have thought a small cartoon animal could cause such anxiety! If the guards or the dogs find something, not only could you be beaten to a pulp but your star rating will increase; the higher the star rating the more suspicious of you the guards become and the more difficult keeping your plans hidden becomes.

The gameplay is fairly straightforward, though personally I found the crafting system a touch fiddly using the PS4 controller. This wasn’t enough to detract from the overall gameplay but, as with any control issue, it does break the spell of the game and bring you squarely back into the real world albeit briefly.

One of my favourite features of the game comes when the AI begins to fight itself in the form of mass canteen brawls. These will sporadically break out and if you can ensure that you are not caught up in it this can be a perfect opportunity to gain vital items by robbing the unconscious guards. Of course, because these events are so dramatic within the in game world they are quashed relatively quickly and as a result you need to be alert, fast and above all careful. You also need to ensure that you hide the items gained before the dogs arrive. *Shudder*

Robinson is a habitual criminal, in spite of all of the successful escapes he still ends up right back where he started; in another prison. This however does not become boring as each prison has a unique setting (including one in space!) and each is designed and rendered beautifully. The style of the game is more in keeping with the SNES/Mega Drive generation of video games which, based on videos of the original game seems to be a significant improvement over the 8-Bit original.

View some Escapists 2 screenshots in our gallery:

As I mentioned earlier, there are not many points during the game where the escape route is obvious, but that is not to say that the game does not provide information on possible escape routes. In many levels escape plans are available and it is possible to use them in combination with your own ideas or instead of them entirely. The game branches off in a non-linear style and there are a number of side quests and other objectives which you can fulfil to make your escape easier (i.e. by encouraging others not to inform the guards of your late night digging).

The Escapists 2 also comes with the option of 4 player co-op play both online and in person. This comes with additional missions and escapes which require more than one player to complete effectively. I used the local co-op to test this feature out. I expected to find something akin to New Super Mario Brothers Wii Co Op where you both do similar tasks throughout the level, I was pleasantly surprised to find that this was not the case. Instead what you have are missions where one player can perform a task to open a door for the other player who can then use their individual skills to gain information or items. This really was an enjoyable co-op experience.

For all of its great gameplay the Escapists 2 is not without its flaws. There are so many occasions when the simple act of speaking to another character is rendered pointless due to intrusive speech bubbles obscuring what I assume is important information. This meant that at several points during the game I was working blind when the information was frustratingly available. The music in the game was ok, nothing special, and could have been so much better. I do get that it is in keeping with the graphics but come on, we’re talking about a PS4/Xbox One game now, it could really have done with a bit more depth.

Overall I enjoyed my time with Robinson. The depth of gameplay is excellent and the graphics, though quite cutesy, are fun and fit totally with the POV and allow you to be completely aware of your surroundings. The escapes are enjoyable to construct and execute and with the exception of a few graphical flaws the game is definitely worth a go.

The Escapists 2 was reviewed using a digital code supplied by the publisher.

In this article:Mouldy Toof, PC, PS4, Team17, The Escapists, Xbox One