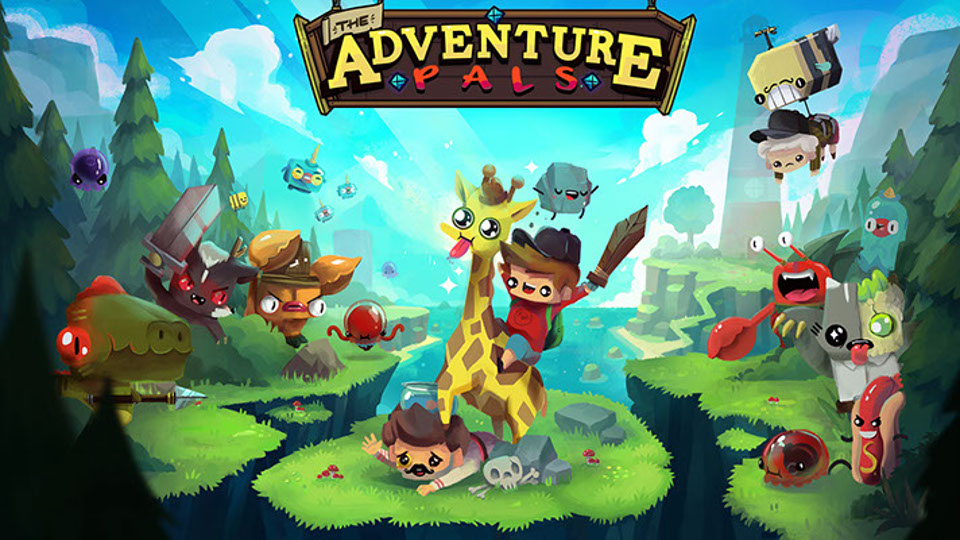 The Adventure Pals is the lovely little tale of a boy setting out to rescue his Papa from a hot dog-shaped fate!

Hot off the press from Massive Monster comes The Adventure Pals. A previous library of cute titles, these indie developers are no strangers to making adorable games. Everything about The Adventure Pals is as inviting as it is fun. A wacky cartoonish direction with the art is guaranteed to make you smile. The boy you play as has a Banjo Kazooie-like set up with a giraffe poking out of his backpack. To put the cherry atop a silly cake–the giraffe uses it’s long tongue as a helicopter for double jump moves. I have to say–this particular animation never got old to me, and still cracks me up every time I think about it.

The platforming has a solid foundation and is loads of fun to work with. Employing all your crazy giraffe acrobatic moves, the game plays as well as you might think. It’s responsive, just the right amount of difficulty and there’s a fair bit of puzzles to get through to keep you busy. At first glance, The Adventure Pals gives off a very Battleblock Theatre vibe to it–but upon playing, you’ll see it’s wonderfully its own stand alone title.

I don’t think I’ve ever seen my kid laugh as hard as when he was explaining the plot to me after having his own crack at it. When the words, “The people are hot dogs” came out, I thought he was going to fall over on the ground right there in tears. The silly concept appeals so wonderfully across the board, and the world that The Adventure Pals has manifested opens the door to let loose and have a good time, no matter your age.

My complaints about the title are few and far between. As I’m reviewing the Xbox One version–my sole gripe comes down to the text being so insanely small. If The Adventure Pals were to be played on a smaller screen, everything would disappear straight away. As it was, it was borderline difficult to read anything, which was a shame because the story is hilarious and well done. Even the HUDs suffered from this one downfall. To say that this is a deal breaker for enjoying the game is wildly out of tune though–The Adventure Pals is a game you could pick up and play without any prior knowledge to the story or (I would say) having to complete a tutorial. I think a lot of the magic in it is the ability to hit the ground running with it–it feels accessible to everyone.

View some screenshots from The Adventure Pals in our gallery:

The co-op mode is a riot. Everything you experienced in single player, times two. For parents looking to join their children on a common ground–The Adventure Pals provides a seamless platform to do so. As I had mentioned above, the learning curve for the game is quite easy. First time gamers might take a second to warm their thumbs up–but it won’t take long before you’re sailing through the air and bouncing up and around walls.

It is with high recommendation that I close this review. It’s a great game for children and adults alike, and a great opportunity to bond over something if you’re looking for a special title to do just that. It handles well, provides just enough challenge and will leave you thinking about how adorable it is afterward. Besides, how many times can you say you’re rescuing the world from hot dogs?

The Adventure Pals was reviewed using a digital code supplied by the developer.