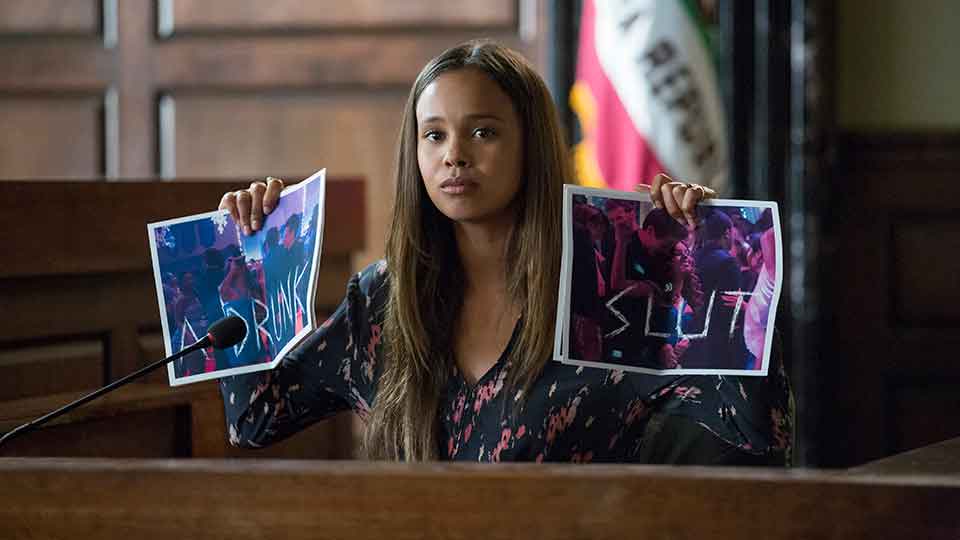 Earlier this week the release date for 13 Reasons Why season 2 was announced and now a set of first-look images have been released.

What do the first images tell us? Not a great deal but they do teases some very juicy storylines. As you probably know, the second season of the hit Netflix series will see Liberty High go on trial in the aftermath of Hannah Baker’s (Katherine Langford) suicide and the images show  her mother Olivia Baker (Kate Walsh) outside of court surrounded by the media.

Jessica Davis (Alisha Boe) is shown testifying and holding up two slut-shaming photos of herself and it looks like Kevin Porter (Derek Luke) is going to confront Bryce Walker (Justin Prentice) about the rapes he’s been responsible for.

The final two photos show Clay Jensen (Dylan Minnette) talking to someone in his room and Tony Padilla (Christian Navarro) being comforted after the back windscreen of his car has been smashed in.

The photos definitely pose more questions than they answer but don’t be surprised if there’s a red herring or two in there, as is 13 Reasons Why’s tendency.

What we do know about the new season is that someone is going to go to extreme lengths to keep the truth surrounding Hannah’s death a secret. The teaser trailer, which arrived earlier in the week, confirmed that polaroids are going to be the central conceit this season as opposed to tapes in the first season.

One question that fans will be keen to have answered is the fate of Alex Standall (Miles Heizer) after he shot himself at the end of season one. There’s been no confirmation that the character is back and he’s not in any of the teasers for the new season so far.

13 Reasons Why season 2 will premiere on Netflix on 18th May and fans will be able to bingewatch the show to their heart’s content.

For more information on the series visit netflix.com/13reasonswhy.

Advertisement. Scroll to continue reading.
In this article:13 Reasons Why, Netflix