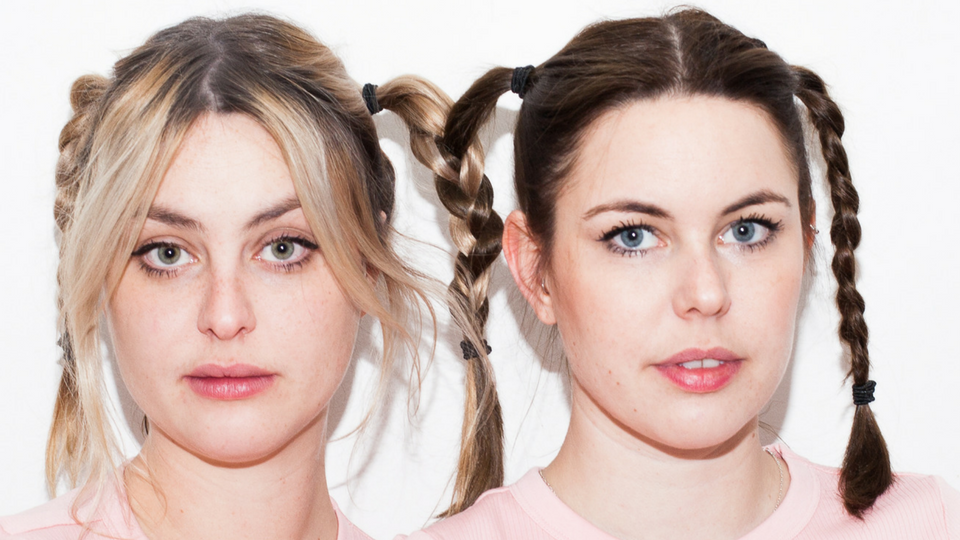 Maddy and Marina Bye are united in birth and divided by their arts training. Maddy trained in a Parisian clown school with Gaulier, Marina took the classically trained actor route at Guildhall. The sister sketch duo convey the joy of opposites and the tension this produces between siblings, resulting in darkly observational, hilariously wacky and societal soul-searching sketches gleaned from people they meet in every day life. The result is a celebration of sibling rivalry, identity and the quirks of human nature.

You can’t help but compare them to iconic comedy duos – especially French and Saunders – but for the millennial generation. Aware of the equal value in silliness and gravitas of life’s uncertainties and formalities, the pair use their own unique identities and apply them in a magical and mysterious array of quick-fire sharp-witted and subversive sketches, leaving the audience totally absorbed, questioning the world around them through a warped and chaotic lens that somehow makes the world more bearable in its extremes.

Siblings took their first show to the Brighton Fringe and Edinburgh Festival last year and quickly became part of the alternative comedy fabric among London’s burgeoning surrealist comedy variety nights. This has been followed by a great run in the 2017 Funny Women competition, reaching the London regional finals – a fantastic achievement for a sketch pair, as the format usually favours stand-up.

Tapping into a need for comedy moving beyond typical satire, the pair have been hard at work crafting their second show – as well as touring their debut – leaving us with a two-for-one Siblings double show offer at this year’s Brighton Fringe. I caught up with them to see what’s in store to ensure I have enough time to psychologically prepare as an audience member to cover new ground. And, maybe, invite my sisters to come along for the ride.

Tell us about your Brighton Fringe show?

Maddy: This year we are taking not one but two shows to the Brighton Fringe. Our first show “Siblings” began at the Brighton Fringe last year, before touring all over London and hitting the Edinburgh Fringe 2017 so we thought we would take it back to where it all began for two special nights. We are also returning at the end of May for a second bite of the cherry, debuting our brand new show “Siblings Act 2”. Both shows are a cacophony of sketch, Gaulier trained clowning, intensely serious Guildhall trained acting, a whole lot of synchronised dance and plenty of deep rooted familial issues. Both shows are suitable if you have or have seen a sister.

How did the idea for the duo come about?

Marina: We are real sisters even though one of us is giant and the other is a small elf. But we have been performing characters together since we were fetuses. We used to perform all the time in venues ranging from car backseats to underneath restaurant tables, playing everyone we saw, nobody was safe. The real comedy duo began at the Edinburgh Fringe 2016 when we had both finished our training at le clown and le drama school we decided to do an open mic together with a party popper, a cagoule and absolutely no material what-so-ever. Needless to say, it was terrible, but we realised how much fun we had on stage together and so Siblings was born.

Maddy: We never expected to ever perform comedy together in front of real people, especially as Marina is a classically trained actress and frankly its a miracle we haven’t fallen out yet. So we would strongly advise you come see us before that happens.

Describe your creative process as a pair?

Maddy: We live and work together so we are constantly, constantly riffing off things we have seen or heard. Nothing has changed much since we were small children so we usually then get really excited about a moment we have had or a character we have seen. Even today we were walking down the street and overheard a delightful women say the words “Eugh… I know I look it, Lucinda darling, but I just don’t feeeeeeeeeel very wealthy at the moment”.

Marina: Immediately we will lock eyes and Lucinda’s friend is still being played now. Usually we start acting out a scenario and before we realise, we’ve made a sketch! We then write it properly and book ourselves in to a gig. We think the best way to make a sketch as good as it can get is by showing it to real people, playing with it as much as possible on stage until they slightly understand the madness.

You both have different training backgrounds in performing arts – acting and clowning. How does this add to the duo’s work?

Maddy: Oh its huge. Our show is predominately about how Marina’s character is a classically trained actress who quite bluntly is using the stage time to get an agent whilst the clown sister is just frankly getting in the way. When we were both studying we were actually learning the same modules at the same time, Greek Tragedy, Moliere, Shakespeare, except Marina was being taught by the greats of drama, I was being taught by a famous clown so together it became hilarious.  The two styles mould, mesh and mash together really well. Its a beautiful and horrendous clash.

What have been the biggest misconceptions around your work?

Maddy: Our show is a sketch show but sometimes people get a little confused because its such a weird version of sketch. They always go to a place that people don’t really expect, sometimes dark, sometimes dirty, sometimes really really dumb. A reviewer once saw one of our sketches and said it started “seemingly predictable” but the “beguiling and slightly creepy daftness pulled it right into a strong slow burning clowning and uncomfortable humour” mmmm spicy perfection.. He also thought we were Australian.

Marina: Our show is also very far from stand up. Even if we are playing ourselves it’s a heightened version of ourselves so it’s all a performance. You can see that some people who expect stand up are confused for most of the first half, but we love a challenge.

Who are your biggest comedy inspirations who aren’t actually comedians or work in comedy?

Maddy: Everyone who we walk past on the street, in the nail salon, in the audience, school teachers. Also our parents friends, Specific shout out to Susan Bertish and Alan Corduner, they are comedy gold and amazing characters.

Some of your work, like the trump supporter sketch and registering to vote, have touched on political issues. How important is this in your work?

Maddy: We have never intended on making any strong political statements through our comedy. We are obviously two females with boobs doing a comedy show, which we guess is a statement in its own, but we never intended on making a show about being women with boobs we just want to be big idiots who make people laugh no matter who we are. The registering to vote sketch actually came about when we did a great gig called Bedtime Stories on election night and we were asked to do a sketch about politics. Our immediate thought was those videos on YouTube where Keira Knightley says “it only takes five seconds to drink this cup of water.. it only takes five seconds to vote” so we made our own one playing Instagram stars which ultimately became bizarre, for example “it only takes 5 seconds to make someone feel incredibly uncomfortable”.

Marina: What we want from our show is to allow the audience to escape from all things serious and into a mad world of mad humans in an all too relatable world.

How do you think your work challenges the comedy establishment?

Maddy: Our work has always been a little outside the box in terms of genre. We never know whether to put it under sketch or clown or character comedy. We think if we could make one up it would be ‘characterclownsketchwithyoursister’. We love seeing more and more alternative comedy shows popping up all over the place, weirder, wilder comedians really being silly and stupid on stage is absolutely taking over in our view. It is really nice to feel a part of that world within comedy, making people laugh by being silly and free.

What is next for Siblings after Brighton?

Marina: EDINBURGH FRINGE 2018! We are taking our new show “Siblings: Acting Out” to the Underbelly at 6:40pm. the perfect time to be drunk in a box for a party.

Maddy: When I think of the words “traditional stand-up” I immediately think of a man with a microphone talking about his first blow job in a car. Stand-up comedy is no longer exclusively a mans game for sure but stand up as a genre is still really thriving I just think its shifting, for the better. There are some absolutely brilliant stand-ups out there changing the world.

Catch Siblings performing ‘Siblings’ at Brighton Fringe from 6th-7th May at 19:30 at The Warren: The Burrow venue and then with their brand new show ‘Siblings Act 2’ from 27th-30th May at the same venue. Book tickets for Brighton Fringe at https://www.otherplacebrighton.co.uk/3781/siblings-acts-1-and-2  and follow them on Twitter @Siblings_Comedy for updates on gigs and Edinburgh Fringe festival 2018.