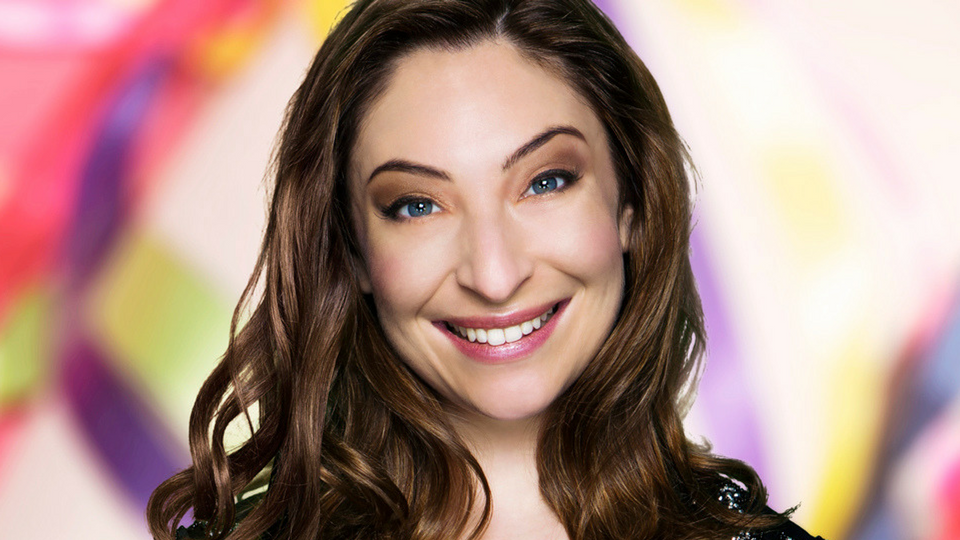 There aren’t many comedians as versatile as Jess Robinson, whose work has found wide appeal, spanning a range of audiences including appearances on The Now Show (BBC Radio 4), Britain’s Got Talent and every BBC TV channel in between. Her shows have a creative vision that combines iconic celebrity impressions, stand-up, musical comedy and singing, pinned together with personal narratives that allow us to see behind the shape-shifting performer to discover her inner thoughts and observations.

Largely reminiscent of the more wholesome elements of the 1970s – family entertainment with a good dose of ‘Girl Power’, there’s no denying that the razzle-dazzle variety-packed show plays to a wide audience. Nearing the end of her ‘Here Come the Girls’ UK tour,  it’s clear that this show is much more dynamic than tried and tested impressionist formats. Behind the glitz, glamour, music and humour, we get an insight into what makes Jess Robinson tick.

Jess’s act plays well to a number of formats and has proved a dream for producers harnessing her talents for both pre-recorded and live TV, radio, Youtube content and a live tour. In fact, the actress, singer, voice-over and impressionist will be returning to the Edinburgh Fringe festival for the fifth consecutive year in August. I caught up with her between shows on her current tour to find out how it’s been received and what else we can expect this year.

“The tour has gone really well” says Jess. “We’ve had some incredible shows that have sold out and it’s been really amazing and better than I expected. I’ve been able to bring the show to a wide range of people.”

“It’s been a real learning curve but great to do something I’ve always loved – getting to sing and make people laugh is a real kick. I get to do so much in the show, where the audience get to know me as a person, as I talk about my earlier background too”.

I wondered how it’s possible to sustain a wide audience with such a broad act, however the intergenerational appeal combined with  a fast-paced cocktail of impressions – which range from Billie Holiday, Julie Garland, Kate Bush, Adele (also made famous by the wonderfully funny Jayde Adams), Nicki Minaj, Marilyn Monroe, Alanis Morissette and more – undoubtedly present an opportunity to become a much-loved household name. “The audience has been very mixed – we’ve had some BBC Radio 4 fans in, some young teens who’d seen me on Britain’s Got Talent who loved Nicki Minaj – there’s something for everyone in this show.”

Jess also makes time for some ‘curious collaborations’ – a fun mash-up duet concept that works as a very creative way to bring together iconic women from different music genres throughout history, telling new tales of what might happen if the two characters met each other. It’s a fertile bed for exploration and creating something new from our own perceptions of musical icons.

The comic performer is keen to stress it’s not just a show for women, it’s using female characters on stage to appeal to all. “It’s in no way an anti-male show, lots of men come along and have a lovely time too. It’s all just very very fun really, with lots of silliness.”

Could we expect to see Jess bridge the gender gap and add some formidable men to her repertoire – perhaps David Bowie, Prince or Freddie Mercury? “It’s just not something I can do purely due to my vocal range – I can’t make my voice go any lower! Ask me to do Sarah Brightman and Kate Bush and I will – but unfortunately I just can’t get my voice to go lower.”

I was keen to ask Jess where the line is drawn between representing the vast array of voices on stage and whether there had been any criticism of choosing to portray women of colour as this could be seen as problematic in its potential to cause offence.

Jess however believes the show is derived from celebrating female voices as a way to connect audiences with her own personality, allowing people – and Jess herself – to find their individual voice.  “I haven’t had any criticism like that at all. The show is a celebration of women in music through a range of music genres from rock, pop, classical and reggae, which doesn’t have anything to do with appropriation. It’s literally about the voice – everyone has one and that’s the main thing really – and finding your own voice within.”

We discussed using iconic female voices in the music industry further – and the role this plays in the show. “The voices are the ‘tools’ in my toolbox to allow me to talk about my story and the women close to me – my mum, my sister – and  use them them as a platform to talk about my life. For example, if i’m feeling low and in need of motivation, the voice of Alex Jones from The One Show kicks in – like a voice in my head – it really is a way of me revealing things about myself and through the medium of other characters.”

Jess is excited about returning to the Edinburgh Fringe festival for the fifth year running with her new show ‘No Filter’ at Assembly George Square Gardens venue, featuring Shakira to Streisand via Adele, Lady Gaga and even Kate Bush – serving up ‘a feast of musical styles and genres’.

There’s also some exciting appearances on TV in store later this year with ‘The Week That Wasn’t’ on Sky One with Alistair McGowan, re-dubbing famous footage along with a brand new ITV impressions panel show ‘The Imitation Game’. We can expect to hear a lot more from all the women who help Jess find her voice, and they won’t be quiet about it.

Book tickets now for ‘No Filter’ at this year’s Edinburgh Fringe at https://tickets.edfringe.com/whats-on/jess-robinson-no-filter and follow Jess on Twitter @JessieRobinson. Find out more about Jess at www.jessrobinson.co.uk

In this article:Britains Got Talent, Comedy, Jess Robinson, no filter