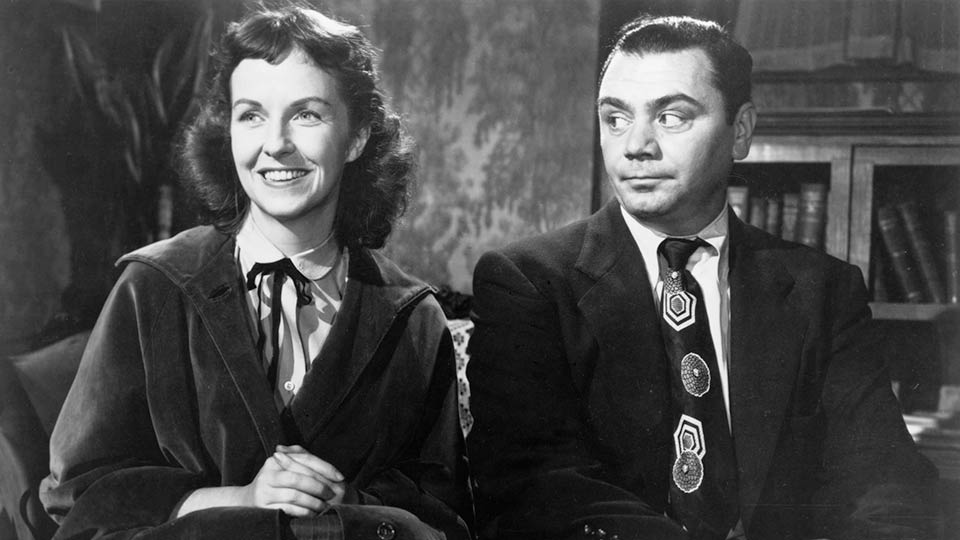 It’s not very often that Hollywood succeeds when championing the ordinary man. Marty is a rare example where just such an effort goes entirely right.

Released in 1955 and revered from the outset, Marty won the Best Picture Oscar as well at the top prize at the Cannes Film Festival and the Palme d’Or.

Marty stars Ernest Borgnine (The Wild Bunch) in the title role. Italian American, thirty-four years old and unmarried, Marty lives at home in a New York apartment with his mother. The marriage of his younger siblings is a cause of embarrassment to Marty, but he has little self-confidence and has all but given up on finding the right girl. Stuck instead hanging out with his remaining single friends, Marty accepts his lot in life. Then one evening he meets Clara (Betsy Blair) who has just been dumped by her date at a dance. There’s an immediate connection. Only, now that Marty has finally met somebody, his mother and friends worry he will abandon them…

The story is straightforward, and the moral lessons clear, but it’s Chayefsky’s script that turns Marty into something special and attracts fine talent to realise its potential. The dialogue is crisp, observant, funny… and the story is told with a natural tempo and rhythm.

The performances are a joy, and the characters entirely believable. Ernest Borgnine is at his loveable best, his large, doe-like eyes well-employed in conveying a conflicted, sympathetic but imperfect soul. His moments of rage, where the anger is directed against himself, are beautifully played, especially when asking his mother to accept he will never find a girl. In her turn, Esther Minciotti is superb as an older, worried, controlling, nosy Italian mother – who could easily be substituted for a stereotypically Jewish one (which was author Paddy Chayefsky’s background). Betsy Blair is similarly perfectly cast as Clara. She doesn’t overplay self-pity, which would make her character unlikeable, but exudes dignity, and lights up when she smiles. Joe Mantell is on good form as Marty’s cool and selfish friend, redeemed by making us laugh.

Marty is a great feel-good movie, with a warm-hearted view of humanity. Funny to think Chayefsky would go on to write the bitterly cynical (but equally witty and observant) Network. If the film has a fault, it’s one that dates it, which perhaps makes any judgement harsh. If it was told now, Betsy Blair’s character would not be so passive at the conclusion of the drama, but play an active or equal role in shaping it. Undoubtedly the lead female is sidelined, and this is so that Chayefsky can concentrate on the damaging relationship Marty has with his male friends – it’s only really the lack of agency Clara has at the end that feels out of kilter, and has to be viewed in the spirit of the time. It’s still beautifully sweet, though.

Marty looks and sounds crisp and clear in impeccably restored black and white film print. Extra features include the full, original 1953 television version of Marty, which is also directed by Delbert Mann. Its stars Rod Steiger (Waterloo) in the title part. After the clarity of the Blu-ray transfer, the archive footage suffers by comparison, in both sound and vision, but it’s an interesting curiosity. There’s also an original trailer presented by Burt Lancaster and archive interviews with director Delbert Mann and the cast, plus a few words to put Marty in context from film expert Neil Sinyard.

‘Nosferatu’ will return to cinemas for 100th anniversary