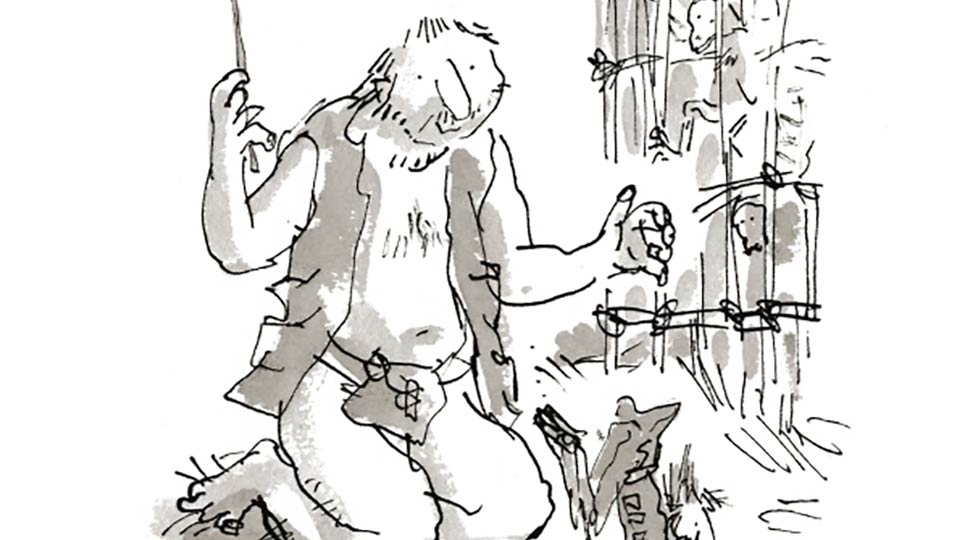 The real Cyrano de Bergerac was every bit as extraordinary as the figure immortalised on stage and screen: a fearless soldier and intellectual, branded a madman by his contemporaries for the imaginative reach of his writings. His two greatest works, Voyage to the Moon and its sequel Voyage to the Sun, are masterpieces of early science fiction, the direct inspiration for Gulliver’s Travels, and a major influence on later sci-fi pioneers including Jules Verne and Edgar Allan Poe.

The books have been a personal favourite of illustrator Quentin Blake’s for over 40 years. He produced a complete – and very extensive – illustration of both texts for The Folio Society in 1991. Now, he has revisited his original images, redrawing, replacing and adding to them, as well as creating a stunning new binding and slipcase. Using Richard Aldington’s classic translation and with an introduction by John Wells, the result is a luxurious enhanced edition of these visionary tales.

This reissue of Cyrano de Bergerac’s Voyages to the Moon and the Sun is available exclusively from The Folio Society.

You can also see the illustrations for yourself. Quentin Blake: Voyages to the Moon and Sun will be held at the House of Illustration from the 4th May to the 30th September 2018. This is the first ever exhibition of twenty five of Sir Quentin Blake’s illustrations for this French literary classic. Tickets: £8.25 adults; £4.00 children; Over 65 £6.50.

Illustrations © Quentin Blake 1991 and 2018 from The Folio Society edition of Cyrano de Bergerac’s Voyages to the Moon and Sun.

In this article:Cyrano de Bergerac, Quentin Blake, The Folio Society, Voyages to the Moon and Sun