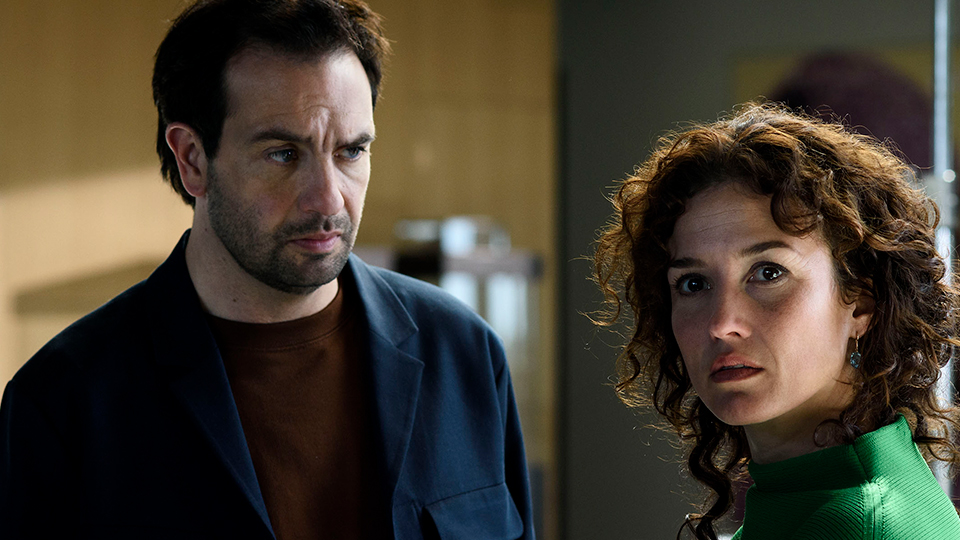 There have been a number of high-profile crime shows from Belgium lately – Salamander, Rough Justice, 13 Commandments and Professor T to name a few – so it’s nice to see their low-country neighbour getting in on the act too. And this Dutch thriller shows plenty of promise in its opening episode (there are ten in total).

Flight HS13 (Vlucht 13) focuses on a surgeon, Simon Kraamer (Daniël Boissevain) and his beautiful wife, Liv (Katja Schuurman). They’re a successful, wealthy couple with a young son living in an affluent Amsterdam suburb. But their idyllic life is ripped apart when Simon’s flight to Barcelona crashes killing all 161 passengers and crew.

Much of the opening episode introduces us to the Kraamer family. They are an interesting lot. Simon has two brothers, one of whom – Haje (Jeroen Spitzenberger) -clearly has the hots for his sister-in-law and work colleague, Liv. Meanwhile Haje’s girlfriend – Alex (Annelies Appelhof) – is undergoing therapy and clearly has trust issues of her own. And then there’s the mysterious Kevin (Ali Ben Horsting) who shows up at Simon’s son’s birthday party. One suspects he has a role to play as the story unfolds. We see him later in the opening episode changing the number plates on a vehicle and selling it to some shady looking characters. Clearly a wrong-un!

But the real twist comes two-thirds of the way into the episode when Liv is attending a ceremony for loved-ones of the victims, during which time they read out a roll call of all the victim’s names in alphabetical order – and Simon’s name isn’t on there. Further investigations shows that Simon and his luggage never boarded the plane and his seat was occupied by someone on stand-by. The mystery is further compounded when footage from the airport shows him leaving departures and heading for arrivals to meet with a mystery woman.

Future episodes see the story move to the Middle East, bringing obvious comparisons with Homeland and the Fox TV series, Tyrant (Adam Rayner from that show has more than a passing resemblance to Daniël Boissevain, too). And whilst it may lack the stellar casting of something like Homeland, the Flight HS13 troupe do a decent job in drawing you in to the mystery of what happened to Simon.

It’s a very promising start. The writing is fast-paced and the storyline absorbing enough to warrant sticking with for the duration. It’s not perhaps on a par with the very best Nordic Noir, but who knows – perhaps we’ll be talking about Dutch Drama in the same tones one day.

Walter Presents: Flight HS13 on Channel 4 at 11pm launching on 24th April 2018 and it will be available simultaneously in its entirety on All 4.

In this article:Flight HS13, Walter Presents