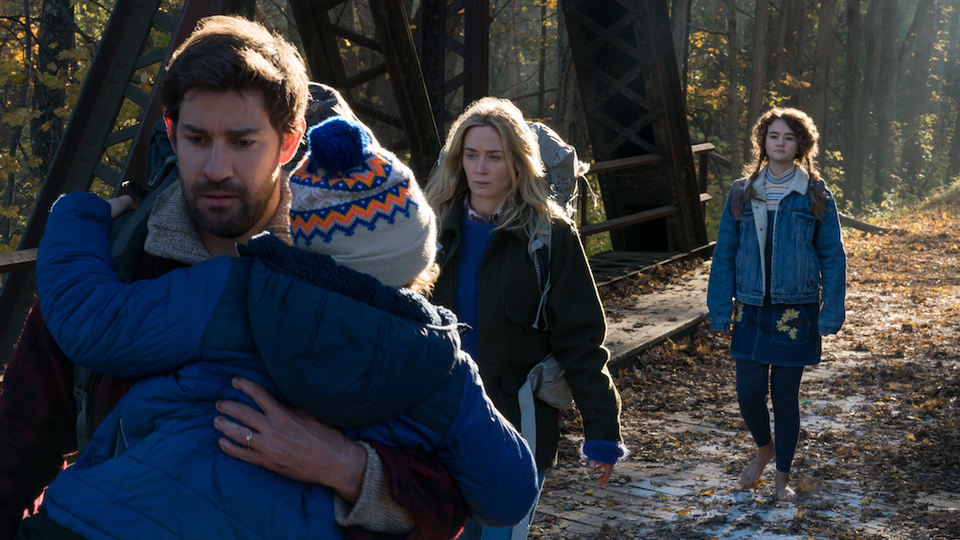 It’s fair to say that the odds of seeing a truly great horror film in this day and age are slim. There have been some good ones recently but the arrival of A Quiet Place marks a seismic shift from the norm. This is without doubt the greatest horror we’ve had for years, but it’s also one of the best films of the year – a heady mix of unbelievable tension and frights that places you directly into the drama and grips you like a vice.

Lee Abbott (John Krasinski) and his wife Evelyn (Emily Blunt) live in constant fear. Their family, made up of their youngest son Beau (Cade Woodward), middle child Marcus (Noah Jupe) and their eldest daughter Regan (Millicent Simmonds) live in a perilous time. Something is hunting them down, and any sound they make will attract a fatal attack. Forced to live in silence, the Abbott’s must use all of their restraint to try and stay alive as danger looms at any given time.

One of my biggest problems with modern horror is its need to jolt you with jump scares that have all the tact and nuance of a runaway freight train, but in the case of A Quiet Place the jolts are masterfully orchestrated. Coupled up with the eerie silence, the film conjures up a remarkable amount of palpable tension throughout. When the frights come, they don’t disappoint either (something which also rarely happens in this genre). There’s purpose and intelligence at the core of every frame of film in A Quiet Place. Nothing is wasted, showing what a keen eye John Krasinski has with his director’s hat on.

The performances are all sensational too. Not content with just directing the film, The US Office’s John Krasinski also stars in the movie alongside his real-life wife (and national treasure) Emily Blunt. They spark with chemistry and creativity onscreen and their shorthand comes to good effect to really sell the premise right from the first frame. Millicent Simmonds, Cade Woodward and Noah Jupe are also fantastic, delivering performances way beyond their young years.

From the outstanding opening to the film, which features a breathless moment of despair, to the last glorious shot of A Quiet Place, this is a film that reinvigorates the horror genre with purpose and true creativity. The film has trimmed all of the fat, leaving a lean, mean and startlingly efficient horror that pulsates through your body for its 90min runtime. Kudos needs to go to Bryan Woods, Scott Beck and Krasinski (again) for delivering a screenplay that literally chooses its words wisely. With an affecting story and an incredible cast, A Quiet Place is an utterly absorbing piece of cinema that deserves a huge audience.