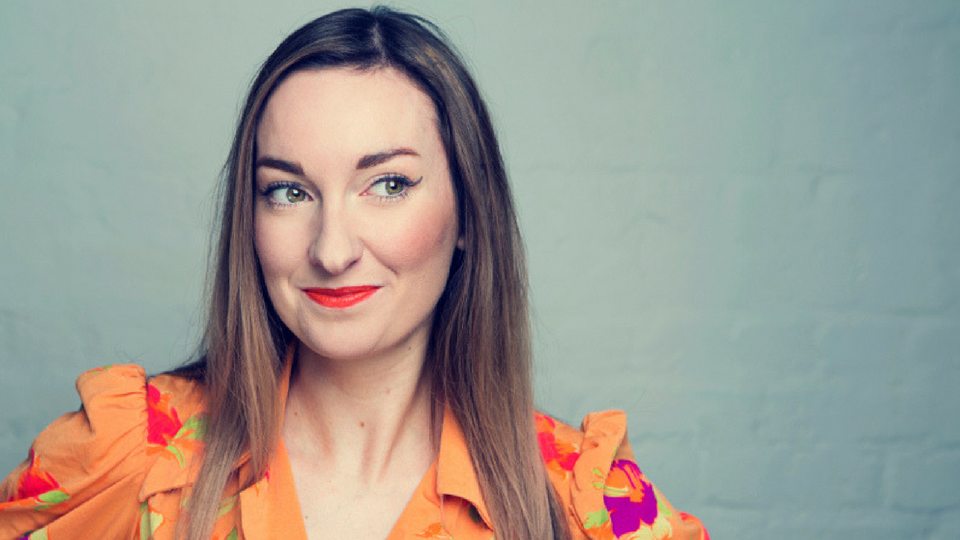 Someone get the prosecco on ice! (Just don’t tell Ava it’s from Aldi)

In the wake of 2018’s global female rebellion, professional office-worker Ava Rage is acclimatising to a new woman world order, with this tale of an anti-heroine’s epic commute to enlightenment, entitlement and empowerment.  The only problem is Lorna Shaw’s delusional alter-ego is metaphorically and often quite literally stuck on the Circle Line, held by a red signal at the “Gen X” end of the millennial woman spectrum. Though make her Prime Minister, and she’ll reverse the gender pay-gap for the next 100 years.

Lorna Shaw (Plebs ITV2, Midnight Beast E4, BBC Radio 4, BBC3) is no stranger to the comedy stage. Previously one half of critically acclaimed sketch duo ‘That Pair’ with partner Kat Bond (their show enjoying a transfer to the Soho Theatre in 2013) the comics decided to embark on separate comedy journeys and pursue solo shows. This is where we get to meet Ava Rage, Lorna’s debut solo show musical comedy creation, who has reached the finals of the Musical Comedy Awards, taking place later this month, which as chartered the rise and rise of musical comedy with previous performers including Frisky & Manish, Abandoman, Jay Foreman, Rob Carter, Rachel Parris and David Elms.

Ava Rage is a heightened incarnation of Lorna’s own personality traits. Channelling experiences of everyday life, Ava Rage is permanently distracted by full-time social media FOMO and paralysed by part-time indecision. However, this ‘every-woman’ is determined to break the monotonous life cycle. With a loop pedal in her handbag and vocal harmonies up her Mackintosh sleeves, Lorna’s character weaves neurotic sound bites with contemporary melodies to create a layered depiction of making the momentous out of the mundane.

I caught up with Lorna over a flat-white (taking shelter from the London rain) to hear more about how she created something so brilliantly funny, which captures not only the resilience and wonder of an awakened anti-hero generation of women, but how she is breaking the comedy mould by choosing to deliver laughs with a song.

Your comic alter-ego Ava Rage has just reached the finals of the Musical Comedy Awards. How excited are you?

I am so so SO excited to be a part of it! The heats have been some of the most buzzing gigs I’ve done. The audiences are there to see musical comedy, so they are 100% on board from the off. Ava is also pretty excited, but I think more for the free prosecco in the green room and the after party.

Ava Rage is your debut solo show since your work as part of That Pair (Shaw’s critically acclaimed comedy duo with Kat Bond). How did the concept for the show come about?

The theme of the show came from wanting to capture all the negative feelings I was experiencing at the time and making them into a celebration of uncertainty. I was questioning all my life choices up until that point, and wrestling with FOMO and crippling indecision. I felt pretty convinced that a lot of people my age (and older) would be feeling the same way so I wanted to create a sort of comedic ‘everywoman’ and that’s how Ava came about.

What are the challenges of portraying an alter-ego comedy character – do the lines get blurred?

The lines are always blurred and keep shifting. I am still working how much of me and how much of Ava is the right amount. I love wearing a costume and being theatrical, but I also want to write stuff that is personal. That’s why I created an alter-ego as opposed to a character. I think the challenge of performing the material too much as a ‘character’ is that there’s a danger of the audience thinking I’m looking down on people like her. But she is essentially me, so any jibes are made at my own expense.

But I think the biggest challenge is having two names – it makes Twitter a nightmare and I worry that people won’t make the connection between me with the character.

Why do you think musical comedy is gaining wider appeal?

I’m not entirely sure but I think Youtube plays a big part in taking it to a wider audience and making it anyone’s game. Also, like any genre, there’s such a range out there so there’s something for everyone. I also think that live comedy at the moment is blurring the lines much more in terms of genre, so comedy crosses over into cabaret which crosses over into theatre – so the possibilities for incorporating music are endless. You’ll see that from the line-up of the musical comedy awards final.

More online content. Ava is going to start vlogging and will be tackling the big issues. Look out for her inevitably misguided wisdom! I’m also taking the debut hour show to the Brighton Fringe and will be at The Warren: Theatre Box 3rd-5th May at 8:30pm. I’m excited to share her with the good people of the South Coast!

What role do you see for comedy in light of global hashtag movements such as #MeToo and how does this affect your material?

I’m all for comedians covering topical subject matter and it’s really important to keep laughing in these troubling times. On a positive note, I think the #MeToo and #TimesUp movements are just one part of a much bigger picture in which women’s voices are being heard more and this can only be a good thing for women in comedy.

You’ve described Ava Rage as an ‘everywoman anti-hero’ – why do you think anti-heros have such universal appeal?

Well, us Brits love a bit of self-deprecation and an underdog. Maybe people are tired of all the filtered and airbrushed images of perfection presented to us on reality TV, lifestyle vlogs and Pinterest. I think people want to see a bit more of a rebellion against all that and there’s real satisfaction in seeing someone kick back against the status quo and either fail or prevail.

My first love is live comedy. I love the process as well as the performing; from coming up with an idea for a joke to putting it in front of an audience for the first time, to then honing it into something that works again and again in front of different audiences. I mean there is never any guarantee that a joke will always work, but that’s what keeps it interesting (and sometimes infuriating).

Where do you draw your comedic inspiration from?

Unremarkable moments in everyday life – I’ve got a whole routine, complete with a three-part harmony, about crossing the road. Then there’s stuff inspired by all the people in my life. In my show there’s an analogy about wearing lots of bikinis that’s a direct quote from my Nan.

If Ava Rage was Prime Minister what’s the first thing she would change?

She’d implement the 3 day working week and flip the gender pay gap so that men earn less than women for the next 100 years.

Which other comedians should we be looking out for in 2018?

Some acts rocking it at the moment – my duo partner Kat Bond, Alison Thea-Skot, Gabby Best and Tamar Broadbent. To name a few!

Lorna will appear in the Musical Comedy Awards Final on Saturday 7th April. Catch her debut show Ava Rage at the Brighton Fringe at The Warren: Theatre Box from 3rd-5th May 2018.