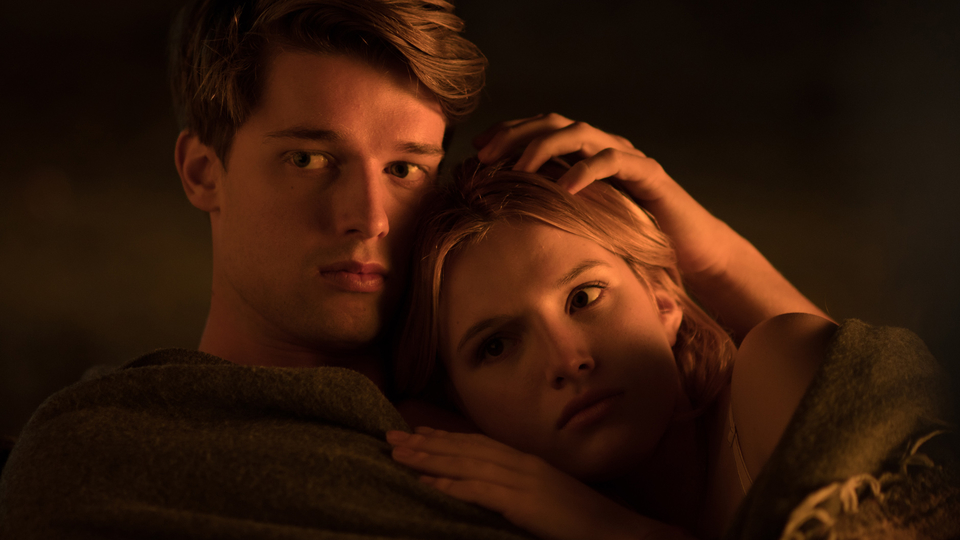 Midnight Sun is an old-fashioned romantic drama that echoes the films of the 80s and 90s which loved to make its teenage audiences weep. It’s by the numbers for the most part, but there’s undeniable charm and grace in Midnight Sun, which does the basics just right and makes you really care about the characters involved.

Katie (Bella Thorne) has a rare skin disorder which means that she can’t be out in sunlight. Cared for by her loving Dad (Rob Riggle), Katie has had a crush on a boy she has seen from her bedroom window ever since she was a child. After a chance encounter one night, she meets Charlie (Patrick Schwarzenegger) and the two soon fall in love. But keeping her condition a secret could be their ultimate undoing.

Bella Thorne really should be a bigger star than she is, and does well here. She also gets to flex her singing muscles and performs some nice songs along the way. Patrick Schwarzenegger certainly has his father’s charm, and Arnie’s son makes a strong case for himself with a solid performance. It’s their chemistry which keeps you hooked and sells the premise, with Thorne and Schwarzenegger making a great and believable onscreen pairing. There were a few times when cliché could have dictated a few plot points surrounding their characters but thankfully Midnight Sun allows Katie and Charlie to just be two teenagers in love, without the need to add excessive baggage.

The criminally-underrated Rob Riggle makes a rare appearance in a serious role and is always a joy to watch. His rapport with Thorne’s Katie always keeps you invested. Quinn Shephard is also great as Katie’s best friend Morgan. Director Scott Speer delivers some sumptuous visuals and uses its beautiful locations to great effect, especially when Patrick and Katie spend a memorable evening together by the river. As mentioned before, the film clearly feels like a 80s or 90s love story and that’s nice to see, especially in the way the shots are composed and how the passage of time is conveyed at the start of the film as we learn about Katie’s day-to-day life.

This won’t be to everyone’s taste but Midnight Sun evokes a bygone era of romantic dramas that shamelessly tugs at the heart-strings, and approaches its story with so much sincerity that it’s hard not to love. The young teen market will get the most out of this but don’t let the cynics deter you – this unashamedly wears its heart on its sleeve, and I commend that wholeheartedly.