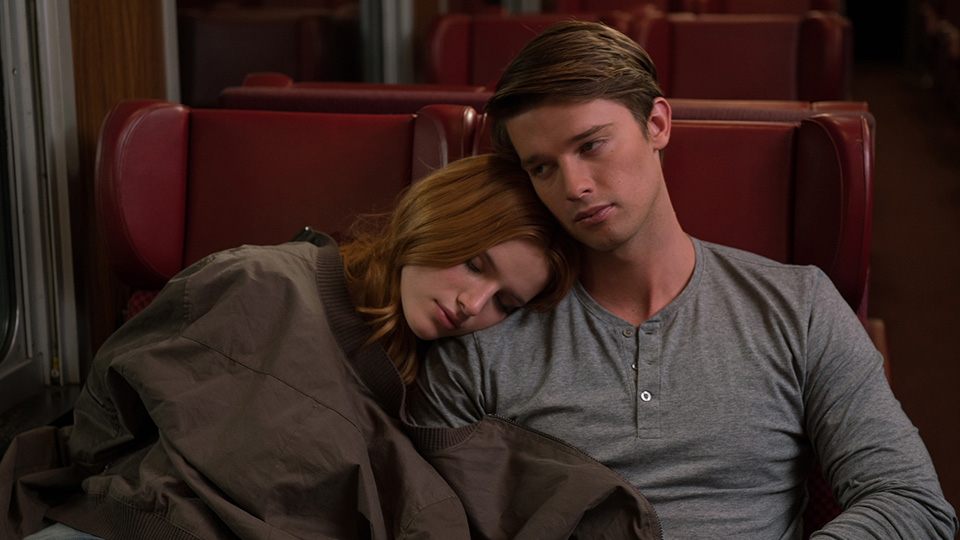 Katie Price (Bella Thorne) suffers from xeroderma pigmentosum (XP), a rare life-threatening genetic disorder that leaves her unable to be exposed to sunlight. Spending her days at home with her father Jack (Rob Riggle) and in the company of her best friend Morgan (Quinn Shephard), Katie passes the time writing songs and playing on her guitar. For years she’s observed her long-time crush Charlie (Patrick Schwarzenegger) as he walks past her window but the two have never met. One night while busking at the train station, Katie and Charlie meet, and in a panic Katie leaves her notebook, which is found by Charlie. Showing an interest in her, Charlie pursues Katie and she begins to experience life outside of her home for the first time.

Midnight Sun is based on the book of the same name by Kenji Bandō and it’s a tear-jerker in the typical Nicholas Sparks vein. You know from the opening moments what’s going to happen before the credits roll but it doesn’t really hamper your enjoyment of the film. Katie is desperate to live as normal a life as she can, battling her over-protective father who is terrified that being exposed to the sun will kill her. She keeps her illness a secret from Charlie and as their relationship progresses, Katie becomes a little fast and loose with the strict rules set by her father and her doctor.

The formula for Midnight Sun has been done over and over but the lead performances from Bella Thorne and Patrick Schwarzenegger make the film very watchable. Thorne is endearing as Katie, never dwelling on the character’s illness and trying to carry on as a normal teenager. She also gets the chance to show off her singing ability too, acquitting herself very well in the process. Patrick Schwarzenegger, who is following in the footsteps of his very famous father Arnold, puts in his best performance yet as Charlie. He has more range than his dad and his chemistry with Thorne is superb. His character could have been written with a little more depth but it’s hard to find fault with his performance.

I really enjoyed the supporting turn by Quinn Shephard as Katie’s best friend Morgan. She brings some much-needed attitude and sass to the film, and she marks herself out as an actress to keep an eye on.

The Blu-ray edition of the film features on behind-the-scenes extra, Midnight Sun: An Inside Look. It’s a brief but enjoyable featurette that looks at the story of the film with short interviews from the cast and crew. It doesn’t give too much insight but it’s a nice little extra to have.

Midnight Sun breaks no new ground and it’s been heavily criticised for the way it presents XP. I think people often forget that films aren’t always meant to be taken as seriously as they often are. If you enjoy this for what this is, a romantic drama with an inevitable tragedy, you’ll get a lot out of it. Thorne and Schwarzenegger are brilliant in the lead roles and it’s a surprisingly touching film. If you like Nicholas Sparks, then you’ll absolutely love Midnight Sun.